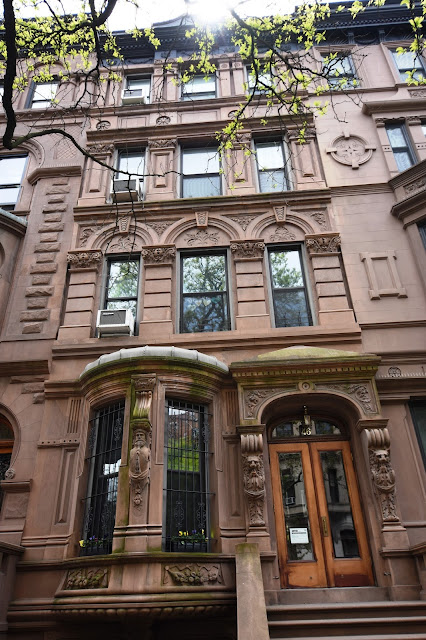 In 1887, as the Upper West Side was emerging as a popular new suburb, developer James J. Spaulding embarked on an ambitious and costly project.  He purchased 19 building lots on West 88th Street between Central Park West and Columbus Avenue and set architects Thom & Wilson to work designing fashionable brownstone dwellings.  Completed a year later, the row paraded every bell and whistle a late Victorian homeowner could want in residential architecture.

Holding its own with its neighbors homes was No. 46.  The architects held nothing back in the Renaissance Revival style brownstone.  Four stories high over an English basement, it boasted chunky stone stoop newels elaborately carved with bows and fruits; a rounded, parlor floor oriel complete with a bearded telamon and domed copper roof; muscular brackets in the shape of lions and scrolls on either side of the entrance; and upper floors embellished with Corinthian pilasters--rusticated at the second floor, paneled at the third, and unadorned at the fourth--and a profusion of rosettes, carvings and arches. 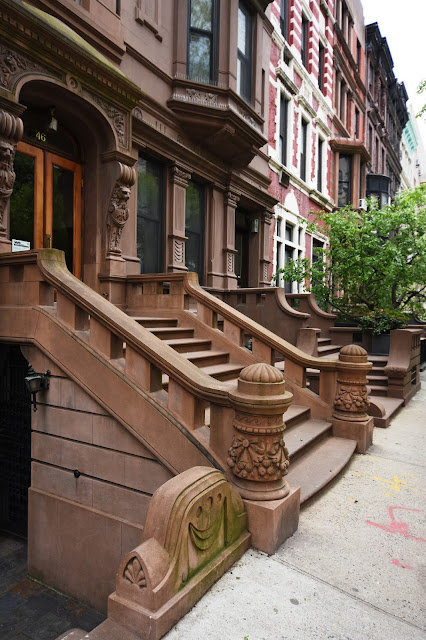 Not far away another carriage maker, George Meyer lived in what The Evening World deemed "pretentious style" at 80th Street and Amsterdam Avenue; saying that he "was always reported to be very wealthy."  On October 23, 1893 the newspaper noted that his firm, George Meyer & Co. "enjoyed an excellent reputation."

But the headline that day told of serious problems.  "GEORGE MEYER GONE."  The article explained that the carriage maker had vanished and "the greater number of his friends say he has fled."  He left behind more than $100,000 in liabilities and The Evening World said "The accounts are in the most tangled-up condition and nothing in fact can be done until he appears and straightens out the firm's affairs."

While the mystery played out, 41-year old Jacob Mattern wasted no time in taking advantage of the unexpected opportunity.  Three days earlier he was awarded possession of Meyer's property by the Sheriff.  His carriage business was suddenly enormously enlarged and he had one fewer competitors. 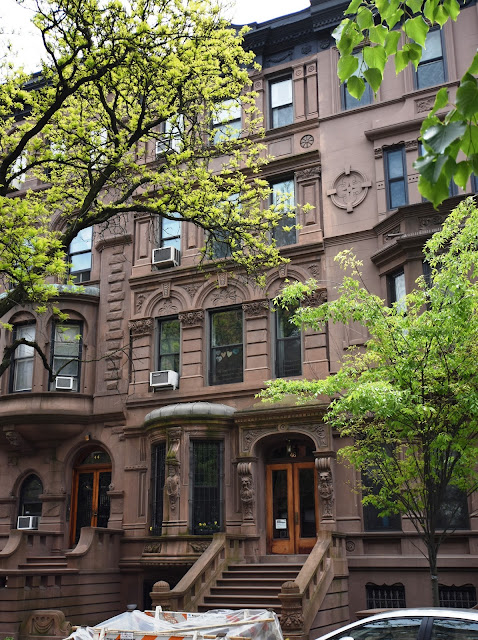 Mattern invested in real estate as well.  And as the years went by, Mattern adapted with the changing times.  As automobiles and trucks replaced horses, by 1918 his six-story factory building at Nos. 215-217 West 53rd Street doubled as a Goodyear Truck Tire Service Station.  A year later, on June 20, 1919, the New-York Tribune reported he had purchased the adjoining four-story stable at No. 219.  "With this purchase Mr. Mattern controls a site 75x100.  He plans to alter his recent purchase for use in connection with his automobile wheels and rims business."

On November 23, 1921 Therese was married to James L. O'Connor in the Church of St. Gregory the Great on West 90th Street.  Anne served as her bridesmaid.  Perhaps because of the large guest list (there were 200 people at the ceremony) the Matterns hosted the wedding breakfast at the Hotel Astor rather than on West 88th Street, as might have been expected.

Jacob Mattern died on Monday, August 4, 1924 at the age of 71.  His funeral was held in the house three days later prior to a solemn requiem mass at the Church of the Assumption.

By 1934 the Mattern residence had become home to physician John Abraham Jenney.  While, by now, most of the houses along the 1889 row had been converted to apartments or rooming houses, No. 46 would survive as a single-family house for another decade.

It was sold in 1944 and alterations were started immediately.  They resulted in two apartments on each floor.  Among the first residents were Simon Frankel and his wife.  Hattie G. Frankel was active in Congregation Emanu-El, on the opposite side of Central Park, and sat on the Board of Directors of its Women's Auxiliary. 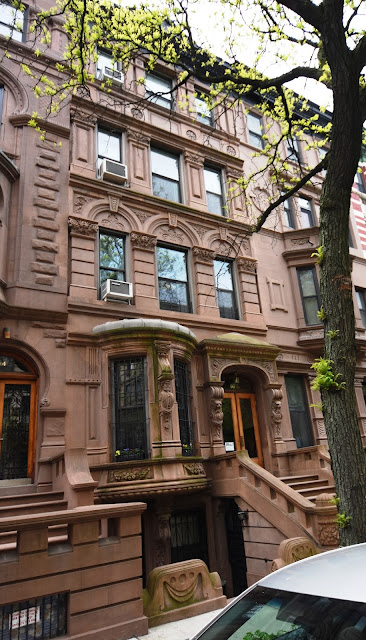 The Mattern house was altered again in 1989; now containing a duplex in the basement and parlor floors, one apartment each on the second and third, and two on the fourth floor.  Sadly, little remains of the Thom & Wilson Renaissance Revival interiors.  But from the sidewalk, No. 46 West 88th Street is little changed; still flaunting its flamboyant presence as it did more than a century ago.