Our Lady of Sorrows School -- No. 219 Stanton Street 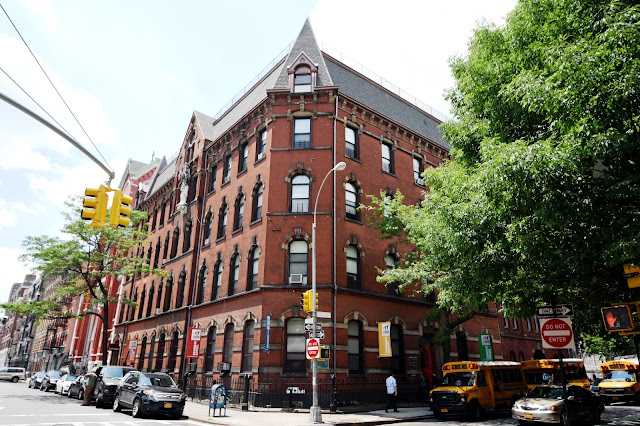 By the middle of the 19th century thousands of German immigrants had settled in New York’s Lower East Side.  In 1857 only Berlin and Vienna had larger German populations.  That year Rev. Bonaventure Frey founded Our Lady of Sorrows parish for the area’s German Catholics.


Construction on a permanent church building at No. 105 Pitt Street began in 1867 and was completed the following year.  In 1873 the trustees obtained the lots next to the church building, extending to Stanton Street, as the site of a school.


Another German immigrant, J. William Schickel, was given the commission to design the building.  Known professionally as William Schickel, he had arrived in New York just four years earlier at the age of 20.   Trained in Bavaria, he designed Our Lady of Sorrows School in the Victorian Gothic style popularized by John Ruskin. The plans, filed on February 13, 1874 called for a “four-story brick school house.”  It was an understated description.


Construction progressed rapidly and was completed before the end of the year.  On December 14 the church ladies staged a “grand fair” in the hall of the school to offset the construction costs.  Church fairs were a common means of fund-raising in the 19th century; and The New York Herald said “a number of tables well covered with objects of art and virtu will surround the spacious hall, and tasteful draping depend from the walls and ceiling.”  The newspaper reported that the shopper could find articles “some of great value and rare curiosity, and there is little doubt that with the efficient corps of lady attendants the fair will be an entire success.”


Five stories tall including the mansard roof, the red brick structure was trimmed in limestone.  Ruskin’s influence appeared in the polychromatic alternating of stone and brick over the openings.  The slate-shingled mansard was punctuated by a row of delightful, stone-faced dormers; a centered gable on the Pitt Street elevation; and pyramidal corner caps.  At the fourth floor a stirring sculpture of the Virgin and Child perched below an ornate Gothic canopy.  Internally, the structure was essentially two buildings.  Girls entered on Pitt Street, while boys used the entrance at No 219 Stanton Street.

The Catholic students from the surrounding tenements were expected, of course, to attend Our Lady of Sorrows Church.  That meant getting up hours before sunrise, at least for their First Communion mass on November 7, 1886.  The New York Times reported that the high mass commenced at 5:30 a.m.  “After the mass 100 little girls robed in white, with veils and flowers, 60 small boys in black clothes and red sashes, 30 other boys, and the clergy marched through the aisles of the church.”


The school hall of Our Lady of Sorrows was used for various events.  On Monday, November 15 that year, for example, the St, Aloysius Sodality, a men’s fraternal organization of the church, gave a “musical and dramatic entertainment” to benefit the purchase of a bell for the tower of the new Church of Our Lady of Angels far north on 113th Street.


Like the church, Our Lady of Sorrows School was run by the Capuchin Fathers.  On February 14, 1888 The Evening World reported on the status of the facility, saying it was “now in a most prosperous condition.”  At the time of the article the boys’ school had an enrollment of 352 and the girls’ school 450.  The difference in “average daily attendance” could be explained by the need for young boys to find work rather than attend school, in order to help with family finances. 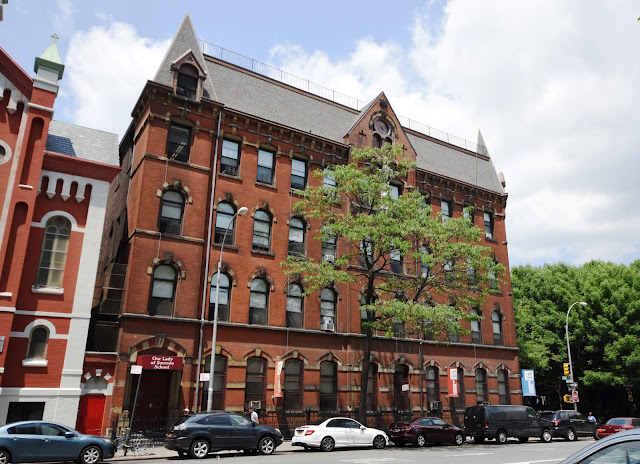 The school hall was the scene of a reunion of sorts on May 2, 1915.  The New-York Tribune reported that “Present and former inhabitants of Pitt Street foregathered to swap reminiscences in the old school hall…last night.  The meeting, which was termed ‘A Monster Smoker and Oldtimers’ Night,’ was under the direction of the St. Aloysius Young Men’s Benevolent Association.  A vaudeville show and refreshments enlivened the evening.”

The hulking Victorian building served the Pitt Street neighborhood into the 21st century.  Then, in January 2011, it was closed by Cardinal Timothy M. Dolan.  The building was converted for the Cooke Center for Learning and Development.  A non-profit provider of special education services for students aged 5 through 21, it also provides consulting and training services. 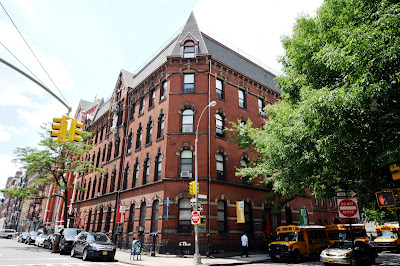