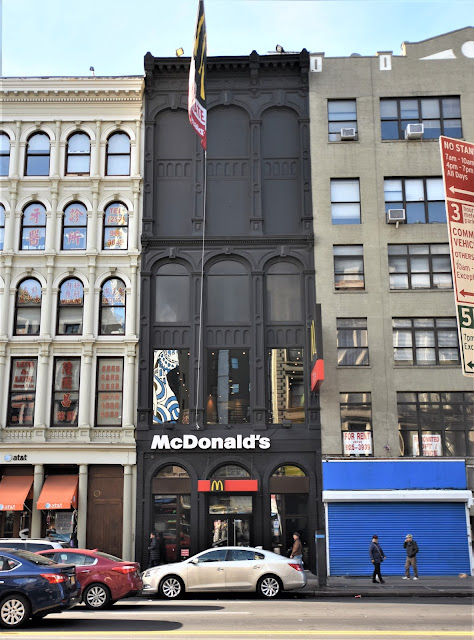 P. H. Frost was a minor player in the real estate game in 1861.  That year he (or a relative--the deed reads "R. H. Frost," a possible typo) purchased the property at No. 262 Canal Street.  Frost became a pioneer in the trend that was transforming Canal Street from a neighborhood of small brick houses and shops to a commercial thoroughfare.

Within the year he had replaced the old building with a modern cast iron fronted store and loft structure.   The tripartite design included the ground floor storefront, and near-matching sections of two-story arcades.  The openings were vertically separated by paneled pilasters, and horizontally by spandrel panels decorated with blind arcades.  The elaborate modillioned cornice included foliate scrolled brackets and a handsome paneled frieze.

Frost invested well.  The property which was assessed at $9,000 when he bought it was now assessed for tax purposes at $22,000--more than half a million in today's dollars.

Nevertheless, it appears P. H. Frost may have had a bit of trouble finding or keeping tenants.  And he still called the ground floor space a "new store" in advertising its availability in March 1868.  A year later the retail space and the floor above it were still vacant.  He advertised in The New York Herald on April 8, 1869 "A first loft New Store--262 Canal Street, near Broadway, to let; low price."

Frost, whose real estate office was nearby at No. 31 Crosby Street, eventually filled his building.  By 1871 J. E. Deacon had moved his dry goods store from No. 13 Barclay Street to the ground floor, and dry goods importers Smith & Lupton had taken space upstairs.

Frederick W. Smith and James Lupton had two other locations-- one at No. 22 Walker Street and another in London.  The firm apparently overspent in 1871 when it purchased $5,000 worth of merchandise from London wholesalers James and John Fletcher.

In a desperate attempt to be paid, John Fletcher traveled to New York in September 1873.  He was frustrated when the accounting books were moved from one location to another.  Finally the trans-Atlantic law suit landed in New York Supreme Court in 1874. 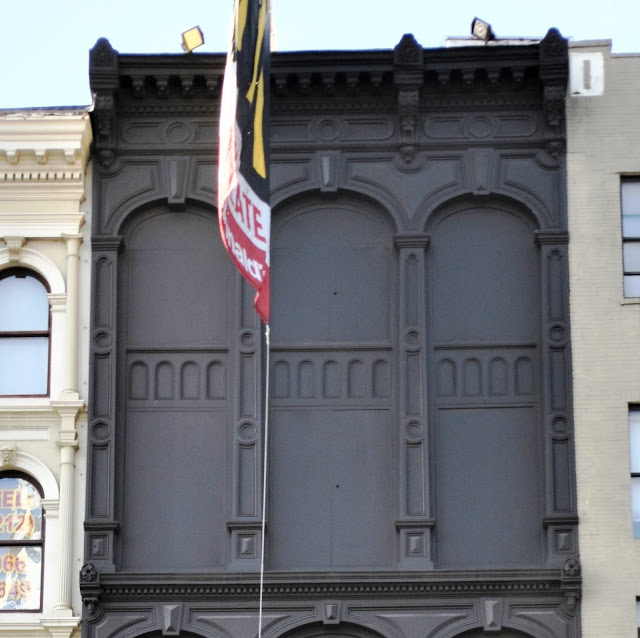 While the Smith & Lupton case was being heard, J. E. Deacon had his own problems.  On Monday, February 2, 1874 a delivery of goods was unloaded onto the sidewalk in front of the store.  A thief made off with one of the boxes.  More than a week later the expensive goods had not been recovered.

Deacon placed an advertisement in The New York Herald offering a $250 reward for "one Case containing 24 pieces of pepper and salt mixed Cassimere...Stolen from Front of store No. 262 Canal street."  Desperate to recover his expensive fabric--known as cashmere today--Deacon's reward would equate to more than $5,300 today.

In 1905 the New York Woven Label Manufacturing Co. was in the building.  The firms operations were large enough that that year it bid on a contract for U.S. Naval goods.

Within two decades carpeting dealers settled on the Canal Street block.  The Empire Carpet Co. operated its showroom at No. 268; and by 1922 the National Carpet & Rug Store was in No. 262.   In 1926 the Lack Carpet Company shared the building as well.

A "motor truck" driver for Lack Carpet Company that year was Nathan Brown.  While making a delivery on August 23 something went horribly wrong.   As he approached the intersection of Grand and Clinton Streets Brown lost control.  The truck slammed into a street car, throwing the passengers to the floor and causing chaos and panic.

The New York Times reported "Several girls had been thrown down and trampled on when Patrolman Charles Mencken of the Clinton Street Station, aided by several civilians, restored order."  Of the 40 passengers several were injured, as were five people standing on the platform including a policeman.

That year a freak accident killed a mason doing repairs in the building.  Brickwork on the third floor was being repaired by 36-year old Emilio Massi on August 20.  As he leaned into the open elevator shaft, the cables holding the elevator on the fourth floor snapped.  The car plummeted, striking and killing him.

Throughout the next few decades the building was home to a variety of small businesses.  Pablo Adler, importers; Murray Distributors, "general merchandise;" and Elgin Instrument Case Co. were all here in the 1950s; and in 1962 United Artificial Fruit, Inc. took space.

Major change came around 1984 when McDonald's took over the entire building.  The cast iron store front was most likely already gone by now and an applaudable effort to mimic the upper floor arches in brick was made.  The restaurant engulfs the lower two floors, its mechanical room the third, and the top floors are vacant, hidden behind blacked-out openings.

While restoration of other cast iron buildings in the immediate vicinity included light colors; the facade of No. 262 Canal Street was painted a funereal black--making it the Darth Vadar of the block.  Nevertheless, the early commercial structure holds its own among the more grandiose structures in the neighborhood.

photographs by the author
Posted by Tom Miller at 1:32 AM