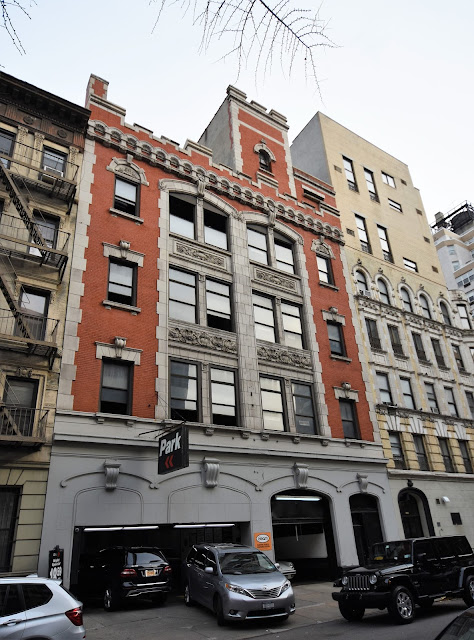 Things were changing in the first decade of the 20th century.  New Yorkers were seeing gas lighting slowly being replaced by electricity, the use of telephones in offices and even in apartment buildings, and the gradual edging out of horse-drawn vehicles by automobiles and trucks.

The block of East 83rd Street, between Park and Lexington Avenues, was a mish-mash of private carriage houses, old three-story houses, and tenements.  At No. 127 East 83rd Street a narrow tenement building stood next to a vacant lot.  John Henry Yockel recognized a need and purchased the two properties from Charles Gulden and Andrew Smith in May 1908.  The New-York Tribune noted "the buyer will improve with a five story fireproof garage."

There were between 200,000 and 400,000 motor vehicles in America that year; and another development was in the works.  Only the wealthy had been able to afford an automobile--the average car costing about $2,500 or around $66,400 today.  But in 1908, the same year Yockel laid plans for his garage, Henry Ford introduced the Model T, priced for the masses at $825.  The age of the car garage was dawning.

Architect John Hauser completed plans for the "four-story brick and stone garage" in July.  The Engineering Record noted construction costs would run $50,000, in the neighborhood of $1.3 million today.  What might have been a surprising figure, considering the utilitarian nature of the structure, was partly due to the engineering necessary for a building holding the weight of 100 automobiles.   And it also had to do with Hauser's lavish design of the facade. 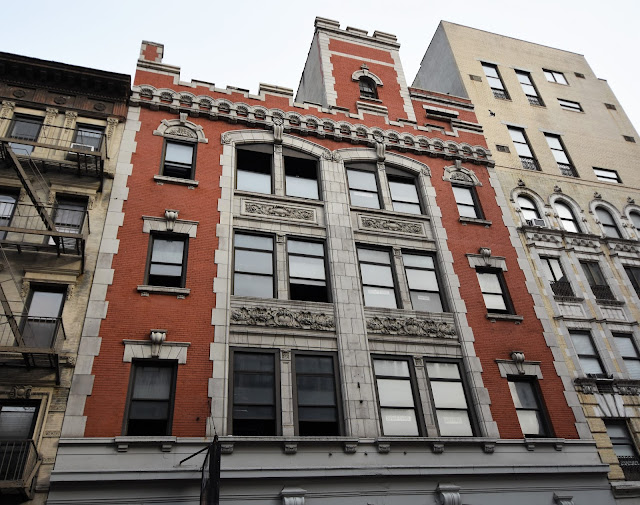 The exuberant Beaux Arts building sat on a stone base with four wide elliptically arched bays, each with a hefty scrolled keystone.  Above, two three-story arches dominated the red brick facade, the spandrel panels of which overflowed with rich terra cotta cornucopia, ribbons and cartouches.  Below the crenelated parapet was a frieze of terra cotta arches, each containing a shell in deep relief.  The machinery for the elevator and other functions were housed in a rooftop tower.  The New York Times mentioned one engineering feat inside, saying "The ground floor forms a large open floor space without any pillar obstructions."

It appears that John H. Yockel overextended himself in the ambitious project.   Foreclosure action began in 1909, and when the property was scheduled to be auctioned on February 24, 1910, Yockel owed more than $86,000 in two mortgages, plus taxes and other costs at more than $4,400.

John H. D. Meyer paid $89.425 for the garage, a significant $2.3 million in 2016 dollars.  He quickly transferred title to the Duford Garage Company, which not only stored its clients vehicles, but serviced them.

In November 1910 Engineering Review noted that the Duford Garage had installed a "very successful appliance, consisting of a combination oil separator and sewage ejector."  The article explained in length the environmentally-friendly system which handled petroleum waste products while ensuring they did not make their way into the sewers.


"The Duford is one of the most up-to-date garages in the city, accommodating about 100 cars, and is provided with a waste stand on each floor connected to a 4-inch main waste line, which connects with the separator."  The complicated system was designed "to avoid any possibility of the oils passing through the discharge lines to the sewer."


The new owners continued to make improvements, and in April 1911 commissioned architect William M. Farrar to "alter toilets" and make other interior adjustments.  The renovations to the still-new structure cost $4,000.

Millionaire George Gould housed his vehicles in the Duford Garage, although his mansion was relatively far away at No. 857 Fifth Avenue at 67th Street.  Following his daughter Marjorie's marriage to Anthony Drexel, Jr. in April 1910, he shipped a touring car to Europe with them so they could motor from country to country at ease.  British chauffeur Beresford Watson was hired to drive the newlyweds on their honeymoon.  When the Drexels returned home, their driver and "the machine" came along.  The Sun noted that Watson "came to this country and obtained employment with Mr. Gould."

In addition to being a capable driver, George Gould's new chauffeur was apparently resourceful.  In January 1911 the metal license plate on the same car that Watson had driven in Europe fell off.  Gould wrote to the Secretary of State for a replacement.  In the meantime, Watson knew he could not drive a plateless car, "so the chauffeur made a leather one of the required size and painted the proper number on it," according to The Sun.

On  February 7 Beresford Watson retrieved the touring car from the Duford Garage.  He soon discovered that not everyone appreciated his inventiveness.  "He was running through Central Park on Tuesday, when Policeman McGuire served him with a summons," reported The Sun.

Watson explained to the judge, "We have done all we can do to comply with the law."  Magistrate O'Connor agreed, saying "There is no evidence here that this man intended to break the motor vehicle law and I discharge him."

The Duford Garage assisted its clients in selling their vehicles, as well.  On November 3, 1912 an advertisement appeared in the New-York Tribune, offering the "Latest model six-cylinder Fiat touring" car.  The vehicle, which had cost its owner $5,000, was selling for a bargain $3,000.  A few years later, in 1920, David Helier offered his Alco five-passenger touring car, in "good condition" at a "very reasonable price."  Helier suggested that a new owner might convert the chassis "into Truck or Working Car."


The expensive automobiles housed in the Duford Garage were threatened in April 16, 1914 when a massive explosion occurred just outside its doors.  The New-York Tribune reported "A gas pocket, which had formed in the sewer under East 83d st., exploded last evening with a force which blew every manhole cover between Lexington and Park aves. forty feet into the air...Windows all along the block were shattered, and sheets of flame shot into the air."

A policeman named Kupec was blown into the street and badly bruised.  The concussion threw a plumber, Joseph Bernard, who was working in the basement of No. 131 East 83rd Street, against a boiler, badly burning him.  "He may lose his sight," noted the newspaper.

In the meantime, employees at the Duford Garage scrambled.  A massive gasoline tank was located directly under the 83rd Street sidewalk.  Should it explode, the results would be disastrous.

The Tribune said garage men "stood guard with pails of sand while the gasolene was pumped from a tank underneath the sidewalk to one in the rear of the garage."  The threat was made more obvious when it was realized that the gas pipe line supplying the tank "was warped and broken."

John Stafford, treasurer and director of the Duford Garage, was 42 years old when the nation entered World War I.  Despite his age, he volunteered for service in the Army and on October 29, 1918 was made a Second Lieutenant with the Motor Transport Corps.

Stafford ran the Duford Garage until 1931 when he retired at the age of 55 "to enjoy the leisure that he had always promised himself," according to The New York Times.  He and his wife, Grace, lived in a "large semi-colonial structure" in Flushing, Queens, and he now spent his time working on the lawns and flower beds.  In May 1932 he started the project of painting the trim on his large brick home.

He had been painting a kitchen window on May 31, standing on a wooden box.  When he quit for the day, he left the crate there.  The seemingly innocuous move proved fatal.  As the Staffords were sleeping, a burglar made use of the box to cut a hole in the window screen and enter the house.

Around 3:45 in the morning, Grace woke and noticed Joseph was not in his bed.  "A moment later, she was terrified by a flash of light and a pistol shot coming from the darkness of the guest bedroom across the hallway," as reported by The Times.  Stafford had surprised the burglar, who rushed past Grace in the dark hallway.

"Mrs. Stafford ran into the bedroom, switched on the light and saw her husband's body lying on the floor.  He had been shot in the head at close range."  Just one year after selling the Duford Garage to enjoy his retirement, John Stafford was dead.

The garage played a part in a murder investigation in 1995.  A female jogger was murdered in Central Park in September and investigators scrambled for clues.  A suspect had been spotted on Fifth Avenue and investigators told reporters he "might still be found with the help of the witness, tentatively identified as John T. Steuerer, 50," who had initially given police his report; but had been lost.

On September 23 The New York Times reported "On Thursday, [Police Commissioner William J.] Bratton made a public plea to the witness, who was driving a 1992 gray Nissan with a personalized license plate that began with the word SOBER, to come forward and repeat his story."

Within hours an anonymous tip came in, saying the car was at the 83rd Street garage.  Steuerer was found (his license plate was SOBER82) with the help of garage attendant Robert Lawson.  He had been unaware that the police were looking for him.  Later Assistant Chief John J. Hill said he had been "very, very helpful."

The operation here continues its venerable tradition by calling itself the Duford Studios (sounding a bit more residential than the garage it is).  And other than a coat of paint on the ground floor stonework and a joining of the two western-most bays; little has changed to John Hauser's ebullient 1909 structure where the limousines of millionaires and the Toyotas of the not-so-rich have come and gone for more than a century.