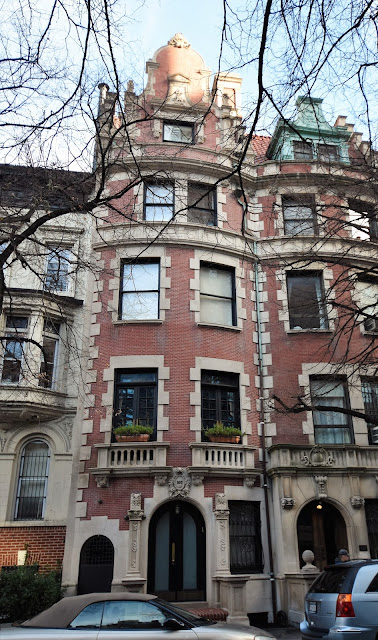 In October 1898 Clarence F. True filed plans for seven upscale houses which wrapped around the northwest corner of 90th Street and West End Avenue.  He received the commission from developers John T. and James A. Farley, who did business as Terrance Farley's Sons.  As the rowhouses were being constructed the Record and Guide commented on the brothers, saying on December 22, 1900 that they "have always been engaged in the building of the best residence improvements and have always kept abreast of the continually increasing demands of the times."

Clarence True was prolific on the Upper West Side and routinely turned to historic styles for his inspiration.  And he often mixed and matched disparate styles with gleeful abandon, as was the case with No. 307 West 90th Street; part of the Terrance Farley's Sons project.

Completed in 1901 the 18-foot wide, five-story residence was designed in the American basement plan which did away with the tall stoop so popular for the past half century.  Two bays wide, True designed the first four floors in an exuberant Renaissance Revival style--its bowed red brick front decorated with conspicuous limestone quoins, two appealing balconettes at the second floor, and an arched Renaissance-style entrance almost identical to that around the corner at No. 627 West End Avenue.  At the top floor True changed gears.  He abruptly turned from Renaissance to Flemish Revival, designing the attic level as a flamboyant Dutch gable fronting a red tiled pitched roof. 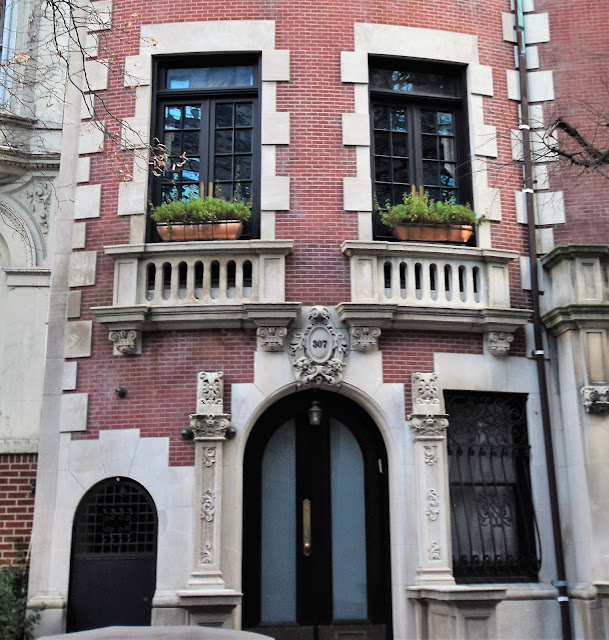 Fannie Story's American roots were deep.   Her English and Dutch ancestors included an uncle, Enos Throop, who served as Governor of New York, and Stephen Allen, the first elected Mayor of New York.  Fannie followed the family's political traditions, serving as President General of the Daughters of the American Revolution, President of the Republican Women's Club and President of the City Federation of Women's Clubs.


The Storys had three sons, Allen, Harold and Sterling, and the family maintained a summer "cottage" in on Long Island in Cedarhurst.  And while the Storys were visible in society, the majority of Fannie's entertainments were related to her various offices.  On Thursday, January 30, 1907, for instance, she held a bridge party for the Manhattan Chapter of the Daughters of the American Revolution.

Rather surprisingly, the fight for office within the Daughters of the American Revolution was sometimes cutthroat.  In April 1908 Mrs. Donald McLean, the incumbent President General, supported Mrs. Matthew Scott, who was running against Fannie Story.  The McLean camp sent out a letter to all delegates to the upcoming congress.  It praised Mrs. Scott for her interest in the proposed Continental Hall in Washington D.C.  The Sun reported on April 9 "As for Mrs. William Cumming Story, who is running against Mrs Scott, the letter says that she doesn't care a continental for the hall, in fact is almost opposed to it."

The fight was on.  "As soon as Mrs. Story's adherents heard about the letter they decided to get out one of their own, and accordingly they hastened to headquarters to obtain a list of accredited delegates and alternatives."  But the D.A.R. officials refused to release the mailing list.  "Mrs. Story's supporters had forgotten that the McLeanites are at present in control of the organization machine and that nothing can go out from headquarters without their sanction."

A reporter called at No. 307 West 90th Street to ask Fannie about the letter.  She said "I have no personal feeling against Mrs. Matthew Scott, who is running against me."  Confident of her win, Fannie said "I shall do everything possible to encourage Mrs. Scott to use her splendid abilities for the advantage of the cause dear to us both."

Fannie was president of the City Federation of Club Women at the time.  The following year was an election year and the fight was no less ruthless than the D.A.R. campaign.  The New-York Tribune opined on January 10, 1909  "'If any Tammany politician wants pointers in the art of manipulating elections let him come to us.'  This is the substance of remarks that may be heard among almost any group of clubwomen in these degenerate days."

Outspoken and opinionated, Fannie Story made her views known.  Indifferent to the feathers she might ruffle, she rallied for women's right to vote and railed against the pacifists concerned about war in Europe (all three of the Story boys would fight in the coming World War I).  And when she was asked to speak at a July 4 celebration in 1910, she may have surprised some in the audience.

While other speakers recalled patriotic feats of George Washington or Thomas Jefferson, Fannie spoke only of women--like Dolly Madison, Margaret Corbin (who helped to defend Fort Tryon), and Catherine Schuyler.  The New-York Tribune reported "She said that they suffered for their country as much as the men did."

About the time of the Independence Day speech the Storys had left West 90th Street.  The 1910 census shows the Lew M. Fields family in the house.  Lewis Moses Shanfield used the stage name Lew Fields.  As half of the enormously successful comedy team Weber and Fields, he had amassed a personal fortune.  The team broke up in 1904 when Weber took over operations of a music hall.  But the multi-talented Fields forged on as an actor and comedian, producer and theater manager.


With Fields had married his wife when she was 17 and working as a toy buyer for the Namm department store in Brooklyn.  They now had four children, Joseph, Frances, Herbert and Dorothy.  Also living with the family was Bob Harris.  He was the uncle of the Fields children, but was only five years older than Joseph.

Joseph seemed to find himself always in trouble. On December 29, 1911 The New York Times reported that Patrolman Boshamer noticed posters on trees along Broadway between 88th and 92nd Streets.  He tore them down; but when he returned later new ones had been tacked up.  He saw two boys busily replacing the posters.

"One of them was young Fields and the other was Herbert [sic] Harris, who lives with the Fields family at 307 West Ninetieth Street," noted the newspaper.  The boys appeared before a judge on December 28, who, "after giving the lads a kindly lecture, fined them east $1, which they paid."

Joseph and his brother Herbert attended De Witt Clinton high school.  In his senior year Joseph had missed so many classes he was in serious trouble.  He brought his father to school to smooth things over.  School officials, however, were not duped.  The youthful Bob Harris made a poor surrogate for the mature (and well-known) Lew Fields.

It ended with Joseph and his brother, Herbert, being expelled from De Witt Clinton; but they dared not tell their father about it.  Decades later Joseph told their astonishing story to Karl Schriftgeisser of The New York Times.  The reporter explained "They sold themselves to a private school as what used to be called, in less honorable days, 'ringers' for the football team.  That meant free tuition, and somehow they managed to be graduated without Lew getting wise."

Lew Fields continued to have theatrical successes, including his 1911 Hen-Pecks co-starring Vernon Castle, and his 1920 Poor Little Ritz Girl, with songs by Rodgers and Hart.  And so it was no doubt a shock to most who read the New York Times headline on August 21, 1921 "LEW M. FIELDS BANKRUPT."  The actor's attorney, Jacob I. Berman downplayed the situation.  He told reporters that Fields "had been forced to take the step because he wished to take a position without having his means of livelihood attacked by creditors."  He said that Fields would continue making payments "until the slate was clean."

In the meantime, although their mother vocally opposed their entering show business, the Fields children showed extraordinary talent.  The family was still on West 90th Street when, in 1922 Lorenz Hart and Herb Fields came up with an idea for a musical, Winkle Town.  Hart's biographer, Gary Marmorstein, wrote in his A Ship Without a Sail: The Life of Lorenz Hart, "The premise was so intriguing to Oscar Hammerstein II...that he offered to work with Herb Fields on a book for the show.  Fourteen or fifteen Winkle Town songs were written on the top floor of the Lew Fields house at 307 West Ninetieth Street."

Dorthy became a lyricist, sometimes working with Herbert.  Among her memorable songs would be "I Can't Give You Anything But Love," "I'm in the Mood for Love," "On the Sunny Side of the Street," and "The Way You Look Tonight," which won her an Academy Award.

Bad boy Joseph eventually became a Hollywood scenarist.  He teamed up with Jerome Chodorv.  Their main success was the screen dramatization of My Sister Eileen.

But before any of that happened, the 90th Street house was sold in September 1922.  In reporting on the sale, the New-York Tribune noted "The property will be altered into apartments."  The resulting renovation resulted in what a later sales report called an "apartment house for nine families." 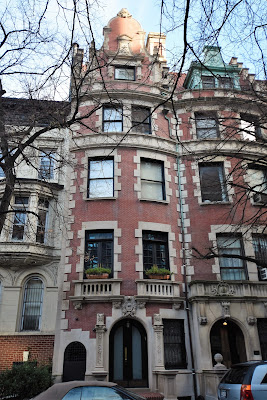