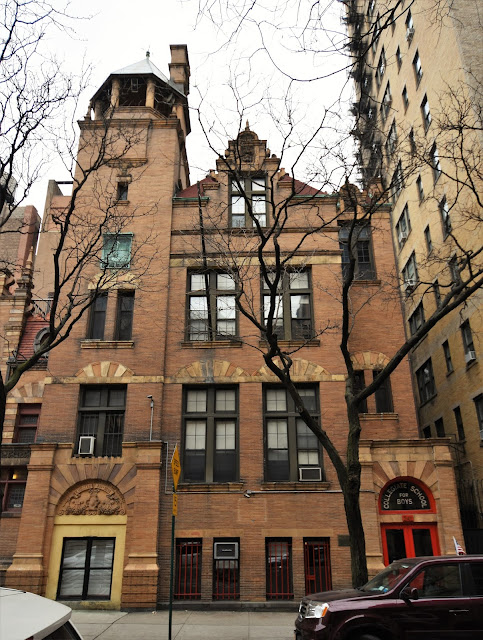 On June 7, 1892 The New York Times published an article entitled "A School With a History."  It was a fitting headline.  The Collegiate School was founded in 1633 by Adam Roelantsen who took the position as its first schoolmaster.  The establishment of a school reflected the importance of education held by the Dutch settlers--New Amsterdam had a population of only about 100 at the time.

The West India Company funded the school.  Roelantsen was succeeded by Jan Stevensen in 1639.  When he returned to Holland in 1648 Peter Stuyvesant wrote to the Classis of Amsterdam pleading for "a pious, well qualified, and diligent schoolmaster."  In response William Verstius was sent to fill the position of "schoolmaster, of consoler of the sick, of reader of the Psalms, and of chorister for the Dutch Church."

During the 17th century, graduation was accomplished through the public "catechising of school children."  The schoolmaster was required by edict to appear in church with the scholars and "after the close of the sermon to examine the pupils in the presence of the ministers and elders in relation to Christian commands and catechism."

The transition from Dutch to English control was not so simple as modern history readers might think.  The 1892 Times article noted that in the late 18th century "the English language had gained such headway in the colony that there were frequent discussions in the church over the advisability of employing teachers who should instruct both in English and in Dutch."  The debate continued until the outbreak of revolution.

The Collegiate School closed in 1776 when the British took possession of the city.  It would not reopen for seven years.  The free school, by now, often catered to those unable to pay for instruction.  The Times noted "The church undertook to provide clothing for many of the scholars, as well as to support the school by money donations."

Although operated separately from the Reformed Protestant Dutch Church, the ties between the Collegiate School and the Collegiate Church were strong.  The school had seen a long series of locations when the church planned its relocation to the Upper West Side in 1890.  Architect Robert W. Gibson was commissioned to design a complex of buildings including the church, a chapel, and school.

Completed in 1892 at the southeast corner of West End Avenue and 77th Street, Gibson's Flemish Renaissance Revival structures offered an unmistakable nod to the Dutch roots of the school and church.  The design of the church was based on a 17th century guildhall in Haarlem.  The architecture flowed uninterrupted along 77th Street to the chapel, and then the Collegiate School building.


Much less grandiose than its ecclesiastic neighbor, the school was clad in matching beige brick trimmed in terra cotta and limestone.  Ambitious stone voussoirs created sunburst effects above several of the openings and a Flemish gable adorned the central pavilion.  Gibson completed the design with a square tower capped by an open octagonal deck.  Atop it was an antique  weather vane in the shape of a rooster "which has ornamented the spires of several of the old churches, now long passed away," said The Times.

The two entrances on opposite sides of the structure were explained by an advertisement in The Critic.  Noting its "New School house," the ad was for the Collegiate School for Boys and Girls.  The co-educational trial would be short lived, however; quickly returning to its boys-only status.


In reporting on the new building's completion, The New York Times reminded readers that the school "is a secular educational establishment;" despite being founded by the Dutch Reformed Church.  "The Faculty are all laymen of different forms of belief."

"The school house has large and handsome lecture rooms, and the top floor is taken up with a spacious gymnasium...There is also a boxing class for outsiders, and there are already several private classes of ladies and gentlemen who have taken advantage of the gymnasium lessons and instruction in the art of self-defense."

The Year Book of the Reformed Protestant Dutch Church described the building.  "This School-house, designed and built for the Collegiate School, has direct light and air on four sides.  The class-rooms are very large, with every detail of ventilation, heating and sanitary arrangement carefully planned and thoroughly constructed.  The house is used for School purposes only, the boiler for steam heating and the janitor's rooms being in another building."

The basement held the "Lunch-room," a drillroom and a playroom, opening onto a paved yard "for outdoor exercise and drill."  Twice a week, for 45 minutes, a United State Army Officer supervised military drills.  "The hours are so arranged that no lessons are interfered with," noted the Year Book.

The concept of what today would be called a school cafeteria was in its infancy.  The Times said "Among the innovations is the serving of a substantial hot luncheon to pupils who do not wish to bring with them the old-fashioned and indigestible school-basket repast."


Although the church and the school were officially separate (The Times had noted that if church members wanted to take advantage of the school's facilities, like the gymnasium, they had to enroll); religion was still a significant part of the instruction.  The Year Book of the Reformed Protestant Dutch Church wrote "The daily opening exercises consist of a 'Recital of the Creed,' responsive reading of the Scriptures, prayer and singing.  Instruction in the Bible is regularly given as part of the course of study."

By 1895, when principal Lemuel C. Mygatt described the school for a newspaper, it was once again teaching only boys.  He noted some of the modern additions to the curriculum.  "The school is equipped with all apparatus and laboratory supplied required for preparatory work in chemistry and physics."  There were also "a darkroom for the use of the Camera Club, and lockers for the baseball and football teams."

Before long there would be another Club in the building--the Mycological Club.  The students, interested in the study of mushrooms, met once a week.  They were disappointed on May 24, 1897 when their plans for gobbling down their specimens was aborted.

"Many fine specimens of mushrooms were brought to the Collegiate School on Seventy-seventh Street last evening by members of the Mycological Club," reported The Times.  "It had been promised that there would be a chafing dish at hand and the members were to have opportunity to become mycophagists--eaters of mushrooms--as well as mycologists."  Sadly, school officials stepped in, pointing out a rule forbidding open flames in the schoolrooms.

In 1903 the Collegiate School reported on its status; while noting that the aim remained "to give thorough and well-ordered instruction under Christian influences."  The quality of education received by the students was reflected in the 127 graduates during the past 12 years who had entered Amherst, Brown, Columbia, Cornell, Harvard, Princeton, Rutgers, Williams and Yale.  The school had always kept its enrollment purposely low--at around 100 students--"that the individual may receive proper attention," according to Year Book.

The Collegiate School, now the oldest private school in Manhattan, prepared for its 300th anniversary in 1933.  The present headmaster, Dr. Cornelius Brett Boock, commented that after three centuries the school was still rather conservative in its approach.  "We are not a progressive school in the modern sense of experimentation with educational methods.  New ideas when they have been proved good ideas are included in our programs."

The six-day celebration began included a church pageant, the unveiling of a bronze tablet marking the event, and a procession from the school to the church and back again.  The guest list at a dinner held in the school on the last night of celebrations included Dr. W. P. Montyn, Consul General of the Netherlands.


The exclusivity of the school continued throughout the 20th century.  In 1959 it had an enrollment of 353, increased by 25 students the following year.  Headmaster Carl W. Andrews, Jr. told reporters  "We have turned down many whom we would have been happy to have in past years." 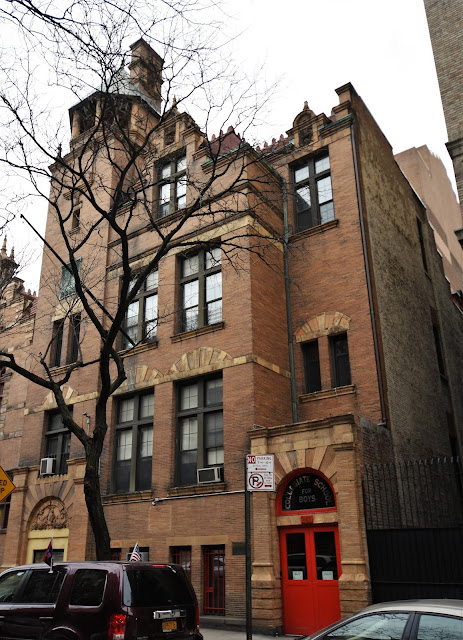 Since 1892 the school had leased the building from the West End Collegiate Church.  In 2006, according to the Observer, the church "requested back the space it had been leasing to Collegiate, declining the school's offer to buy the building."  The article said the school would relocate to "a modern, new campus on an oddly shaped block of Riverside Boulevard between 61st and 62nd Streets."

An announcement from Collegiate School board on February 5, 2013 confirmed the report.  Board Chairman George R. Bason Jr. estimated the move-in date for the new facility, costing between $125 and $135 million, would be the summer of 2017.  It will end a 125-year tradition in Robert W. Gibson's quaint and picturesque building.