Robert Linlithgow Livingston’s family was among the oldest and most respected in New York.  His first ancestor in America, Robert Livingston the Elder, arrived in Albany in 1674.  The family estate, Livingston Manor along the Hudson River, was expanded until it was larger than the state of Rhode Island.

In 1892, at the age of 18, Livingston entered the banking firm of Kountze Brothers as a clerk.  His position there was bolstered when he married Helen Kountze in Grace Church on December 12, 1902.   In January 1904 he was admitted as a general partner.  Tragically, just one month later Helen died.

The young widower moved into the mansion of his aunt, the Countess Henri de Longier-Villars at No. 311 Fifth Avenue.  Following the expected period of mourning, he resumed the life of a bachelor millionaire.  On one trip to Europe very old money would meet the very new.

Massive fortunes from silver, gold and copper were being made in the Far West.  The wives and daughters of these new millionaires struggled for acceptance by East Coast socialites who most often viewed them as nouveau riche and uncultured.  And so the wife of Dennis Sheedy, Director of the International Smelting Company in Denver, had their two daughters, Marie and Florence, educated in a convent school and took them on extensive trips to Europe.

It was on one such trip and Robert L. Livingston met Marie Sheedy, known by newspaper readers as “the richest girl in Denver.”  A romance bloomed and Marie’s mother seems to have grasped the opportunity.  A telegram to The New York Times from Denver in 1911 noted “Although the Sheedy home is in Denver, the family have spent a great part of the Winter season at the Plaza, in New York, during the past few years.”

After Robert and Marie were “seen frequently” at social affairs and despite the difference in their ages (Livingston was now 34 and Marie was “in her early twenties”), their engagement was announced in December 1910.  The Times mentioned that she “is popular among the younger set in New York” and “attended nearly all of the dances and entertainments given by the younger society girls in New York.”

The couple was married in the Sheedy mansion in Denver on February 15, 1911; a local newspaper calling it “one of the most fashionable ever held in Denver.”  The article noted “The wedding gifts were magnificent, including a residence in New York and a rope of pearls to the bride from her father, who is a mining man.”

Livingston’s remarriage seems to have caused tensions at Kountze Brothers, and he resigned upon his return from the honeymoon.  In 1912 he became general partner in the newly-organized brokerage house of Adams, Livingston and Davis.

The Manhattan house presented by Dennis Sheedy was a vintage brownstone at No. 41 East 75th Street.  But by the spring of 1916 the couple anticipated a modern home.  On May 27 that year the Record & Guide noted that Livingston had purchased property on the south side of East 96th Street, near Central Park, “and contemplates the erection of a handsome five-story residence.”

Seven months later, in December 1916, Odgen Codman, Jr. filed plans for the $60,000 mansion.  The architect and designer had completed his own Parisian-styled mansion almost directly across the street, at No. 7 East 96th Street, in 1913.  His vision for the block was an enclave of picturesque French residences; and when Livingston purchased his lots, the Codman-designed mansion of Lucy Dahlgren was just being completed at No. 15.   The project led the Record & Guide to note “the addition of Robert L. Livingston to the 96th street colony,” on September 30, 1916.

Completed in 1917 the limestone-clad Beaux Arts-style house at No. 12 East 96th Street sat on a rusticated granite base.  The expected French-style mansard roof brought the 96th Street elevation to five full floors.  But to the rear, unseen from the street, the mansion was seven stories high.

The Livingston mansion was completed just in time for an addition to the family.  In October 1917 newspapers made note that the Livingstons had closed “The Ledges,” their summer estate in Magnolia, Massachusetts and were at 96th Street for the winter.   A few weeks later, on November 19, The Sun reported that the couple “are receiving congratulations on the birth of a daughter yesterday at their home, 12 East Ninety-sixth street.  It is their third daughter.” 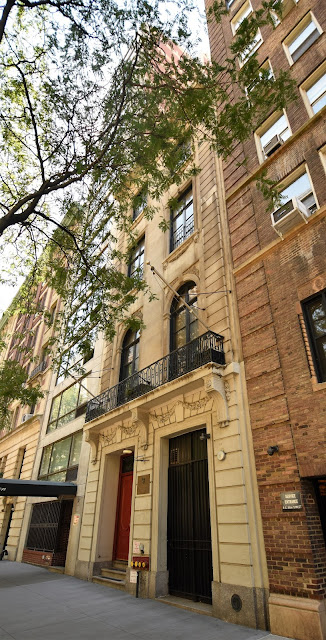 By 1921 the Livingstons had purchased a new summer estate, Balleylock, in Beverley Farms, Massachusetts.  The family continued to expand.  On May 16 that year The New York Herald reported that the Livingstons “are receiving congratulations on the birth of a son on Saturday evening.  The boy, who will be named after his father, is the seventh descendant in direct line from Robert Livingston of Livingston Manor.”

Exactly one week later The New York Times reported “Robert L. Livingston of 12 East Ninety-sixth Street has taken his three elder children to Balleylock.”   There the estate staff would care for the girls while the dutiful Robert rushed back to Marie.  “Mr. Livingston will return, but, with Mrs. Livingston and their baby, now a week old, he will rejoin the other children late in June.”

In the spring of 1925 Robert L. Livingston caught a cold which progressed to pneumonia.  He died in the 96th Street mansion on Sunday morning, April 12, at the age of 49.  Marie lived on in the house with the children; however she spent less time here.

On December 3, 1930 The Times reported that Marie, who had been in Pau, France for about a year, “will return here next Summer and go to Callender House, her place in Bar Harbor.  She will occupy her old home at 12 East Ninety-sixth Street next Winter, when she will introduce her daughter [Denise] to society.”

By now, however, Ogden Codman, Jr.’s exclusive French enclave was all but a memory.  Only three private homes survived on a street of modern apartment buildings.  In 1934 the family of Samuel Friedman was occupying the Livingston mansion.  They were still here in December that year when the engagement of daughter Eleanor to Robert Strasser was announced.

But the end of the line for No. 12 as a grand residence was near.  In 1939 it was sold and converted for us by a succession of upscale private schools.  The Emerson School was in the building in the last half of the century.  The exclusive school accepted only 55 students, ages three through five.  The 1971 tuition for five-year olds (about $7,000 in 2016) required an additional $225 for lunch.  The school promised the parents of potential students a “rich reading readiness” program, including lessons in French.

By 1983 the former mansion was home to the Carnegie Hill School; and in 1988 was converted to the All Children’s House, an institution for homeless children.  It was a short-lived experiment and by the turn of the century La Scuola d’Italia “G. Marconi” was using the house—offering bilingual instruction from nursery school through high school age.

In 2015 the school put the property on the market for $21,750,000.  The realtor’s listing noted “The townhouse contains stunning original details, including intricate moldings, multiple fireplaces, a grand staircase, a wood-paneled ballroom, and a wrought-iron balcony.” 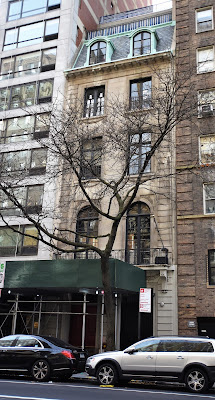 Neighbors and preservationists will wait to find out the fate of the remarkably-surviving mansion.