When architect Gerard Fountain purchased the large brownstone home at No. 136 East 70th Street in 1896, he almost immediately took advantage of the advantageous Lexington Avenue corner location.  The avenue was already seeing commercialization, and he extended the structure into part of the expansive rear garden to accommodate ground floor stores and apartments above.

He went further in 1898 when he leased the remainder of the garden plot to the Wm. S, Anderson Co. as the site for its headquarters.  The real estate firm was founded in 1868 by William S. Anderson, and incorporated in 1895 with Harold D. Keeler as its president.  Anderson stayed on as vice-president and treasurer.

The leasing of the plot at No. 954 Lexington Avenue was part of an innovative idea.  As A History of Real Estate, Building and Architecture in New York City explained that same year, "On the principal that no man can cover the Island thoroughly and familiarize himself with district investors and conditions thereof, the company opened four offices in as many sections of the city."

The firm hired the architectural firm S. B. Ogden & Co. to design its modest main office building.  Completed early in the fall of 1898, the three-story brick structure was essentially neo-Renaissance in style.  The cast iron piers of the ground floor featured intricate Renaissance style decorations and delicate rosettes.  Above, the architect was sparing but clever in his use of stone.  It appeared as a continuous lintel over the broad triple office window at the second floor, and connected the three upper openings as a single lintel.  A stone bandcourse at this level creatively morphed into projecting sills supported by hefty brick supports.  Their reverse stair-stepped design was echoed in the brick cornice brackets.

In the meantime, the Wm. S. Anderson Co. conducted its extensive real estate business from its headquarters, boasting "telephone connections" in an 1899 advertisement.

After leasing the former garden plot for 22 years, the firm bought the land in April 1920.  By now Frank Knapp was president of the well-known business.  He had joined the company as an office boy in 1891 at the age of 14.

In 1922 Knapp converted part of the upper section to an apartment.  But it would not be long before hints of financial problems appeared.  On June 13, 1929 the Lenox Hill Holding Company announced it had leased both the old brownstone at No. 136 East 70th Street and the Wm. S. Anderson Co. building.

The onslaught of the Great Depression naturally affected the real estate business.  On June 7, 1932 Frank Knapp surrendered the lease of No. 954 Lexington Avenue to the Dash Realty Corporation.  That firm also took over the lease of the 70th Street house.

Despite its apparent troubles, the Wm. S. Anderson Company continued to do business here.  Frank Knapp and his wife, Lillian, lived conveniently one block away at No. 973 Lexington Avenue.  In January 1947 he became ill, and died a few weeks later, on Sunday February 9.

By the late 1950s the office space where decades of Manhattan real estate was leased or sold had become a laundry business.  As the neighborhood filled with galleries in the second half of the century, the Yook Wah Lai Laundry was transformed into a most unexpected art venue.

Artist Mark Kraus was convinced in 1961 that "laundry windows afford some clear advantages over gallery showings."  A New York Times article explained "In the first place, galleries are sometimes hard for relatively unknown painters to get into; the standards of hand laundries are less exacting."

Kraus had a laundry list of advantages.  While galleries were normally opened about nine hours a day, the laundry was open from 7 a.m. to 11:00 at night or later.  He said window space was better than wall space, and "the fluorescent lights in the window call attention to his work from as far as a block away."

The artist paid the laundry $1 per day to display his art in the window.  The Times noted "If the venture is profitable, he may soon be displaying paintings in the windows of Chinese laundries in all the better parts of town."

But within the year Kraus would have to find new exhibition space.  In 1962 Demarchelier, an upscale food shop, was operating from No. 954 Lexington.  Throughout the subsequent decades it would be home to The Breen Box, which dealt in decorative items from India and Italy; The Golden Brioche food boutique; and the Alan Price Gallery. 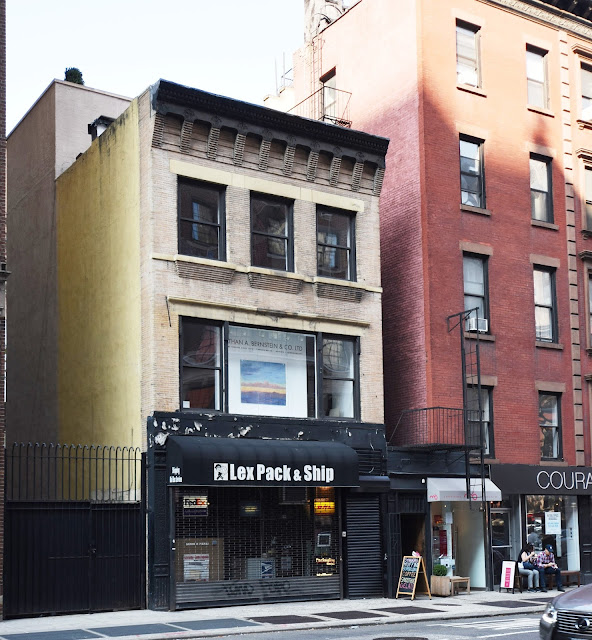 In 2016 a less glamorous packing and shipping store is in the much-altered ground floor.  Other than the replacement windows, the upper stories of the surprising, free-standing commercial building are little changed since the Wm. S. Anderson Co. made its unexpected move into a mansion's garden.