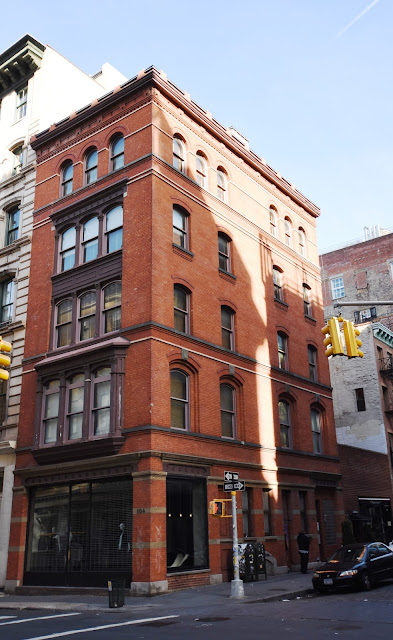 Before turning his men out that evening, Police Captain McDonnell instructed his patrolmen "to watch all liquor stores on their posts carefully," according to The New York Herald the following day.  Liquor was pouring freely in the Grand Street saloon, and Melcher was arrested.

Six years after the incident, on December 11, 1892, real estate operator James Sterling Bearns purchased No. 104 Grand Street from Henry W. Niemann.  He paid $40,000 for the property, an astonishing $1 million in today's terms.  The value was not in the two-story building; but in the corner plot in a neighborhood which was by now filling with modern commercial structures.

Bearns commissioned architect Julius Kastner to design a replacement building.  The two men would work together on other such projects in the coming years.  The Grand Street building was completed in 1893.  Kastner had produced a five-story brick, stone and cast iron building which married Queen Anne and Romanesque Revival styles.

The ground floor was highlighted with stone courses which produced a striped effect.  A slightly projecting bay at the second floor distinguished the Grand Street elevation.  Grouped openings continued uninterrupted for three floors, embraced by cast metal.  The elliptical arched openings on the Mercer Street side with were trimmed mostly in brick; although the fourth floor windows received stone sills, and rough-cut stone keystones set off the second story openings.  Here Kastner created dimension by inwardly-telescoping the brick window framing.  The top story changed course, turning to groupings of three Romanesque arched windows which sat snugly upon a plain stone cornice.

The upper floors, accessed on Mercer Street, were leased to manufacturers and wholesalers.  In 1890 the second floor was home to silk merchants John Lutz & Son; the third floor was leased to Herbert West's "tailor's trimmings" store; and Lapidus Brothers was on the fourth floor.  Owned by Abraham and Hyman Lapidus, the firm manufactured pocketbooks.

Herbert West had only been in the building for a year (he had moved his business from No. 814 Broadway in 1889) when he suffered about $1,000 in damage to his stock.  On March 22, 1890 Policeman Michael Savage was walking by the Mercer Street doorway when he noticed water flowing out from beneath it.

He propped a ladder against the fire escape, then climbed upwards, peering into the windows until he found the source of the problem.  Someone had left a faucet running all night in the Lapidus Brothers factory.  The water "had flooded the greater part of Herbert West's store," reported The Sun the following day.

Luckily for the other merchants, after ruining West's stock, the water flowed down the stairs instead of pouring through the ceilings below.  The Sun said no harm was done to John Lutz & Son's silks and satins, "or to the frescoing in George Rottmann's saloon on the ground floor."

Herbert West knew where to point blame for the negligence.  He told a reporter "I shall be getting my bill for Mr. Lapidus ready by and by."

Lutz & Son was still doing business here as late as 1908.  They were joined by leather merchant Harris Weisbaum around that time.  Weisbaum's declaration of bankruptcy in 1912 would seem to most to have been the worst of his problems.  It was only the beginning.

On November 21 he was convicted of fraud after it was discovered he had hidden $3,100 worth of merchandise from auditors.  Judge Mayer "ordered the bankrupt to be kept in prison until he turned over to the creditors $3,100, the value of merchandise which Wiesbaum secreted from [them]," according to the New-York Tribune on November 21.

The creditors' attorney told reporters that "this was the beginning of a movement on the part of wholesale leather dealers to rid the trade of fraudulent bankrupts."

Much less controversial was tenant McMann & Taylor, which was here at least until 1918.  Dealers in plumbing apparatus, specifically pipes and fittings, the firm had been in business since 1862, starting out as Norris, King & McMann.

The employees of many manufacturers at the time formed their own athletic teams for after-work relaxation.  McMann & Taylor's employees formed a bowling team to participate in the New York Supply Trade Bowling League.  They were apparently better at selling plumbing supplies than in bowling.  In 1906 Sanitary and Heating Age reported on its losses to two other teams on January 9.

By 1920 the Mercer Lunch Co. ran its luncheonette in the space once occupied by George Rottmann's saloon.  Among the tenants upstairs were the American Christmas Tree Outfit Co., and the Star White Goods Mfg. Co.

James S. Bearns had been married to the former Ella Louse Darlington.  Following his death the Grand Street property passed through the family until Ella's estate sold it in June 1943.  The New York Times remarked "this was the second conveyance of the property in 113 years."  At the time the property was assessed at $16,000 (in the neighborhood of $220,000 today).

The new owners, J. Kalfus Co., commissioned architect Herman Wolff to update the old structure.  The $4,000 in improvements, the plans for which were filed in August 1950, were to include "store, offices and storage."

By the third quarter of the 20th century the Soho neighborhood around No. 104 Grand Street was experiencing a rebirth.  Old factories and warehouses were converted to art galleries and residential spaces.  In 1997 Mimi Sheraton of The New York Times remarked "Although it lacks immigrant fervor, this segment of Grand Street is home to strivers of another kind, those with dreams and aspirations in the creative arts: painting, sculpture, fashion, designs in graphics and home accessories, and cookery.

A 1975 renovation at No. 104 Grand Street resulted in "joint living-work quarters for artists" on the upper floors.  By the time of Sheraton's article, George Rottmann's former saloon was home to Cucina Della Nonna; a restaurant whose menu was inspired by Italian grandmothers. 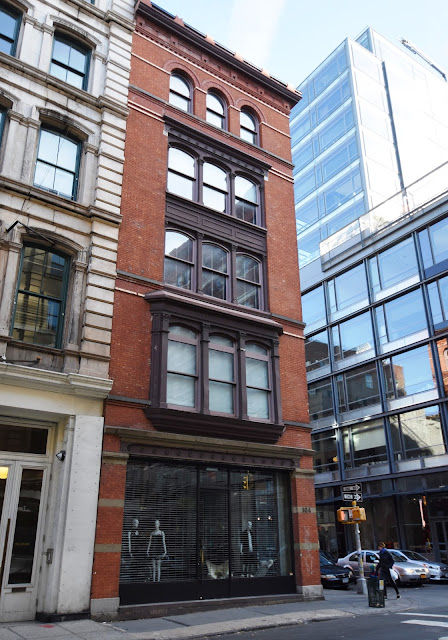