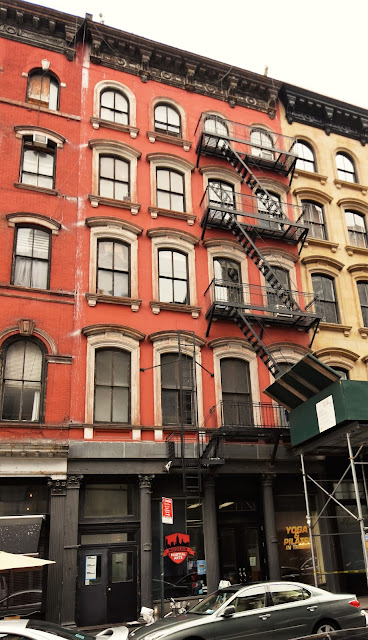 In 1859 the once residential block of Reade Street between Broadway and Church Street was quickly giving way to commerce.  That year George Bradshaw leased the properties at Nos. 74 through 78 Reade Street from Trinity Church with intentions of hastening the process.

The old houses had never been high-end.  In the 1830s and ‘40s John Taylor, a shoemaker, lived here.  But the year before Bradshaw leased the property it had fallen into disrepute.  On March 19, 1858 The New York Times reported “Mary Graham and Louisa Smith, who keep a noted panel crib at No. 78 Reade-street, were arrested, yesterday, for robbing one Michael Fee of his gold watch, and committed.” (A “panel crib” was a brothel with secret, sliding doors by which rooms could be entered and customers robbed while they were otherwise engaged.)

Bradshaw set architect James H. Giles to work designing a modern loft and store structures to replace the old, low buildings.  Completed in 1860 the five-story Italianate buildings were identical, producing a pleasing architectural flow.  (That same year John Martin, Jr. hired Giles to design the abutting, corner building at No. 80-82, which would visually complete the group.)

Bradshaw had also leased a plot on Church Street, No. 177, from St. George’s Episcopal Church.  He used it to make No. 78 Reade an L-shaped structure, larger than his other two, with a similar but less elaborate façade and side entrance on Church Street. 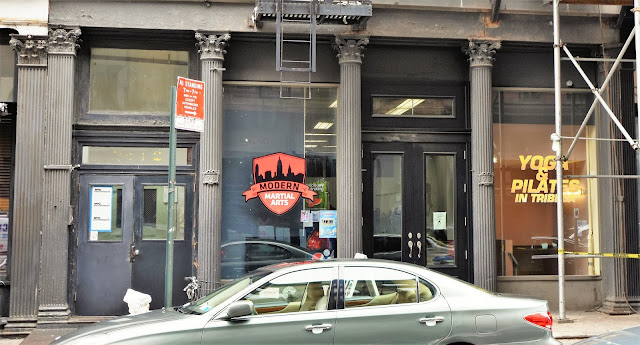 Like its neighbors, No. 78 Reade Street boasted a handsome cast iron storefront, forged by the Architectural Iron Works and most likely chosen from its catalog.  Fluted columns with ornate Corinthian capitals supported the broad entablature which would announce the store’s name.  Above were four stories of red brick, trimmed in contrasting stone.  The arched openings within carved enframements sat on bracketed sills.  A robust cast iron cornice sat above the round-arched upper fifth floor windows.

On June 17, 1863 Captain O. O. Potter offered a testimonial for his physician; directing readers of The New York Times to No. 78 Reade Street for confirmation.  “Dr. Lighthill has succeeded in restoring to perfect hearing my right ear, which has been deaf for some time—caused by a cold.  As I am obliged to leave for New-Orleans in a few days, those who may wish to make further inquiries may call on my brother, Mr. H. C. Potter, No. 78 Reade-st., firm of Streeter, Fallon & Potter, who will be happy to give any information desired.”

By 1865 business directories showed that William Fielding & Bro., importers of hosiery and gloves, had moved in; and S. J. Dennis was acting as agent for the United Worsted Co., a braid manufacturer, in addition to its own merchandise.

In 1871 Heminway & Sons won first prize at the American Institute’s exhibition for “the best sewing silk and twist.”  The firm would remain in the building for about two more decades; yet the arrival of Benedict & Burnham, dealers in brass and German silver, and Steele & Johnson, button makers, in the 1870s signaled a change in tenants.

Cox was traveling during the first months of 1888 when money went missing in the office.  The cashier, Andrew J. Kelly was arrested and jailed at Police Headquarters.  A friend of Kelly’s played down the incident to reporters saying “the amount involved was not large,” and that when a $128 discrepancy was found, “a Mr. McMahon, who assumed authority in the absence of Mr. Cox, had him arrested, but that on Mr. Cox’s return matters would be righted”

Another footwear firm in the building at the time was John Long & Son, “boot and shoe fitters,” and later the Metropolitan Shoe Company would find its home here.

One merchant in the building that year, C. B. Kennedy, found that talking politics in a bar was rarely a good idea.  On Saturday afternoon, September 2, 1888, he entered Daniel Malchow’s saloon at No. 58 Varick Street with a friend. Thomas S. Wells.  The two settled into a conversation about the upcoming Presidential election.

“Here’s to the election of Cleveland,” toasted Kennedy, tossing back his drink.

Another patron, John Brennan, took umbrage at the remark and said so.  Malchow was bartending and pointed out to Brennan that no one had been talking to him, and he ordered him out of the saloon.  Brennan left—but only momentarily.

The Sun reported the following day “Brennan picked up a beer keg outside, and returning threw it at Malchow, who was behind the bar.  Malchow had Brennan arrested, and Brennan gave $100 bail for good behavior.”   John Brennan was no doubt pleased when his candidate, Benjamin Harrison, lost the popular vote but nevertheless gained the Presidency two months later.

The 1890s saw publishing firms moving into the Reade Street building, as well.  By 1892 Kittredge Company, publishers of Business magazine, was here, as was D. T. Mallett, publisher of the Hardware Dealers’ Magazine.

The well-known pencil manufacturer, A. W. Faber & Co. was in the building by the turn of the century.  If the embezzlement of $128 by an employee of P. Cox Shoe Mfg. in 1888 caused the firm concern; then the discovery of around $30,000 stolen by Faber’s “confidential bookkeeper” in 1901 was staggering.

William Hopeppner was 37-years old and had been employed by Faber for seven years.  He had a wife and two children, and lived well beyond his means.  He earned $2,500 a year; but his apartment at No. 200 West 111th Street cost $1,500.  He managed to live well by changing the amounts on his pay checks—carefully altering $347 to $847—and then manipulating the books to hide the discrepancies.

On June 18 he failed to report to work and two days later, when his cancelled paycheck was returned to the office, manager W. F. G. Geisse noticed the altered amount and notified police.  When detectives arrived at the Hoeppner apartment, “they found Mrs. Hoeppner and her children making preparations to move.  She told them that he had sailed for Europe on the Lahn,” reported The New York Times.

The police staked out the apartment.  A few days later two vans drove up and Mrs. Hoeppner supervised the loading of her furniture.  Apparently aware that she was being watched, she did not leave the city immediately.  Instead she went with the children to No. 423 West 17th Street for two days; then took an apartment at No. 17 Abingdon Place for two months.

On August 19 Mrs. Hoeppner and the children climbed into a carriage and headed to the North German Lloyd Steamship Company’s pier in Hoboken.  The long trip was more subterfuge in case anyone was following.  And they were.

After standing around a while, in the pretense of waiting for a passenger, she hailed another carriage which took the family to the Lamport and Holt Line pier in Brooklyn.  They boarded the steamship Coleridge which was headed for Rio de Janeiro.   Mrs. Hoeppner most likely felt she could now relax; having slipped away from the grasp of United States law enforcement.

She had forgotten about the telegraph.  Brazilian police tracked her movements from the time she landed, to her boarding the steamer Bresil on September 10 and her landing in Buenos Aires.  “A few days later the local police located Mr. Hoeppner at the house of Antonio Navarra, a mica merchant of that place, and placed him under arrest,” reported The New York Times on September 28, 1901.

On October 5 Detectives MCafferty and Price set off to bring the embezzler back to New York for trial.  The amount he had stolen would amount to about $865,000 by today’s standards.

At the time the Sonora Chine Company was making two-movement chime clocks at No. 5 Cedar Street.  In 1908 the Seth Thomas Company bought the patent rights to the mechanism; forcing the owners to move in another direction.  Founder George Brightson reincorporated the firm as the Sonora Phonograph Company in February 1913 and that same month leased space at No. 78 Reade Street.  The firm would remain in the building for years, becoming a major phonograph producer.

The year that Sonora moved in Lewis Smith, a wholesale druggist operating here, was involved in a horrific incident in the Fort Hamilton area of Brooklyn.  On September 27, 1913 Donato Salsa, an Italian immigrant, had spent most of the afternoon collecting driftwood along the harbor shore.   He was pushing his top heavy wheelbarrow home in the middle of the road.

At the same time Lewis Smith was heading home to his home in the Flatbush area.  As he approached the man from the rear he honked his horn so he would move out of the way.  Tragically, Donato Salsa was deaf.

Smith continued forward, honking his horn; but Salsa was unaware of the approaching automobile.   The Times reported “When almost on top of the man, Smith turned his car sharply to one side, to avoid running him down, but just then Salsa swerved his wheelbarrow in the same direction and the auto ran over him.  He was dead when surgeons summoned from the army post got to him.”

No. 78 Reade Street continued to house a number of footwear firms.  In 1918 C. E. Wethey Shoe Company rented space; and in 1914 M. B. Martine, Inc., was here, joined soon by Firestone Rubber Boot & Shoe Co.    M. B. Martine was on the second floor and produced women’s beaded slippers and shoe trims, such as buckles and bows.  On August 19, 1920 it advertised for “home work beading slippers; price doubled and bonus to quick workers; two dollars deposit required; beginners taught.”  The company also needed an “experienced examiner, teacher and sample maker.”  The latter, it noted, were “inside positions.”

The American Gas Machine Co. was advertising that year, as well.  It needed a “boy to assist in shipping room; good pay, easy hours, steady job.”

At mid-century importing firms Charles Khouri, Inc., and Paul Spitz & Co. were here.  Both were victims of burglary in July 1950.   But after a police chase and gun battle on July 14, 30-year old Paul Carbonaro and 28-year old Vito Esposito were arrested.  The burglars had made off with loot totaling $171 from Spitz.  Charles Khouri, Inc. was less fortunate—the amount of bonds stolen from its office amounting to $5,000. 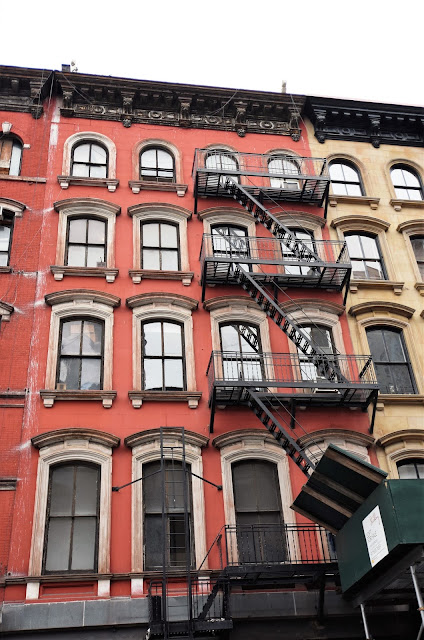 In 1992 the upper floors were converted to a non-profit residence for the elderly.   Today the cast iron columns survive in front of a modernized storefront; while the upper floors are virtually unchanged.