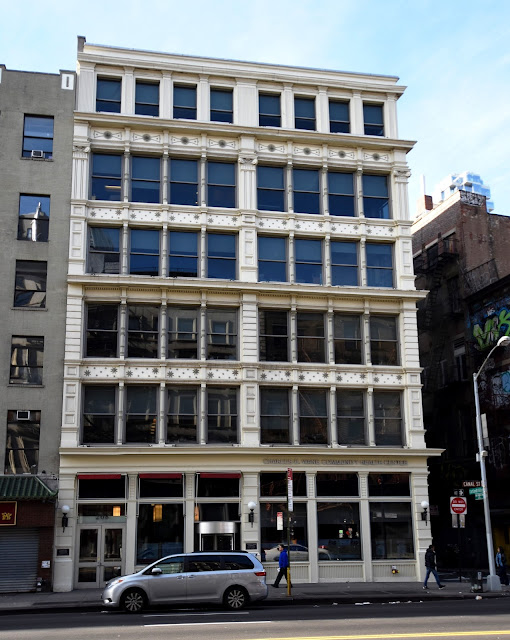 In the decade prior to the Civil War the five-story brick National Hall stood at Nos. 268-270 Canal Street.  An advertisement in The New York Herald on September 20, 1859 offered "One large room in the National Hall...suited for a meeting room or manufacturing."  Briefly the building was used by Noah Wheaton, "purveyor of Doors, Sashes, Blinds" and other housewares, including oaken ice boxes. The wealthy merchant and his family lived far to the north in the former Gracie Mansion.

The building was owned by Jeremiah W. Dimick, Sr. in the post war years.  He had formed the J. W. Dimick Co. in 1840, manufacturing and selling carpeting.  Dimick leased the building to Thomas Ryan for his paper box factory.  On August 13, 1868 disaster struck.  About 40 girls were at work at 5:00 that afternoon.  The weight of the large quantities of cardboard and paper, and the cutting machines proved too much for the aging structure.  The third floor gave way, plummeting workers and equipment through the floors.  Amazingly, only three teen-aged girls were injured.  One, 19-year old Mary F. Fallon, died the following day.

In 1886  Jeremiah W. Dimick, Jr. demolished the old brick structure and commissioned architect Lansing C. Holden to design a showroom building for his business, with rentable upper lofts.  Completed in 1887, the Queen Anne-style structure had nothing in common with the old National Hall.  Faced in cast iron, vast expanses of glass flooded the interiors with sunlight.  Holden used many expected elements, possibly chosen from the Atlantic Iron Works catalogue, like fluted Ionic pilasters, rusticated piers, and pencil-like colonnettes.  But he unleashed fanciful Queen Anne sunbursts and freckles in the spandrels above the second and fourth floors; and bow-tie like designs around frothy rosettes above the fifth.

The J. W. Dimick Co. moved into the street level showroom.  An advertisement in The New York Herald announced "Carpeting--Just Received.  200 pieces of John Crosley & Son's new pattern English Brussels Tapestry; $1.25, in quantities to suit purchasers."  The price point seems to have held steady in 1874, when Dimick offered Kidderminster carpets "excelling Brussels and threeplies" for $1 per yard.  (The price would translate to about $21.50 per yard in 2016.)

At Christmastime that same year J. W. Dimick advertised "Save your carpets during the Holidays; 500 Crumb Cloths and Mats at reduced prices for cash."

In the meantime, the upper lofts were leased to tenants like Benjamin Marks, dealer in "woolens," here in 1884.

Jeremiah Dimick moved his carpeting business uptown and the showroom was taken by auctioneer Benjamin S. Wise by 1897.  An exciting three-day auction was held here beginning on June 29.  The cycling fad had swept the nation and bicycles were still highly expensive.  An 1897 Fowler bicycle retailed for $100--nearly $3,000 in today's dollars.


Benjamin Wise auctioned off 500 1897 Fowlers, along with other makes (Victors, Peerless Mfg. Co.'s Crown Toledos, &c, &c.) and accessories.  Wise's auction ad promised "This is first opportunity the public has ever had to purchase 1897 $100 Fowlers at less than list."

The year after the bicycle auction Isaac H. Blanchard leased Nos. 268-270 from the Dimick family.  The principal of the Blanchard Press, he had become interested in printing while he was working for the Newark High School newspaper in the 1870s.

The New York Times later explained "In 1883, with $450 in savings and a note for the same amount, he bought a half interest in the printing business of Fred Oberhauser...and with his earnings paid his way through Princeton."  In 1891 he bought the other half of the business from Oberhauser's widow.  When he took Ancel J. Brower as a partner in 1898, the name was changed to the Isaac H. Blanchard Company.  It was at that time that the move into the Canal Street building occurred.

Labor disputes in the early 20th century were often violent and dangerous.  Printers went on strike in February 1906.  The strikers were not happy with workers who remained on the job and they intended to make their point well known.  On February 27 Thomas B. Dumphy left work with three other workers.  Three strikers, Edward Fister, George M. Michaud, and William J. Anderson followed them, issuing threats from behind.

Instead of being intimidated, Dumphy summoned a policeman.  The strikers were arrested and charged with disorderly conduct in the West 47th Street Station house.  Two of the men refused to give their names; and one said he was Charles A. Meyer of Sussex, New Jersey and that his companions were also from Sussex.  Their victims, of course, corrected that information.

On the night of May 6, 1907 fire engulfed the three upper floors of No. 268-270.  About 2,000 people crowded Canal Street to watch as firefighters scrambled to rescue Blanchard Press employees.  The New York Times remarked "the scene was made more interesting by the use of a powerful search-light which lighted up the front of the building and brought out the men on the ladder in strong relief."

The employees had been working overtime on the top floor and were unaware of the fire, which began on the second, until an automatic alarm sounded.  Walter Deans, a lithographer, brothers Abe and Moe Levine, and one other worker found themselves trapped by the flames.  They hurried to the roof hatch, but it was tightly locked.  "They only gave up their attempts when the place was so full of smoke that they had to take to the fire escape to save themselves from suffocation," reported The Times.

When firefighters arrived "The flames were roaring from every window of the burning floors."  Extension ladders were raised to the fire escapes and the four men were rescued.  Isaac Blanchard later told reporters that the June issue of Burr McIntosh's Monthly had just been completed and was reach for delivery, but "the entire issue was destroyed."  He estimated his loss at $150,000.

The building was in the name of Jeremiah Dimick's daughter, Theresa D. Browning at the time.  Within the month she hired respected architects Israels & Harder to renovate the burned out floors.  A sixth floor was added at the same time, at a cost of $18,000.  While the architects continued the flow of Holden's design, theirs was a much more toned-down, neo-Classical take.

While the Blanchard Press continued operating upstairs, Damsky & Katz moved its Empire Carpet Co. showroom into the first floor in November 1907.  On April 9, 1919 a rash of robberies took place throughout the city.  The following day The Times noted "Police reports of robberies in the city yesterday began early in the morning."  One was from the Empire Carpet Co.

Joseph Stanton was the engineer of Nos. 268-270 Canal Street; a position more widely known as a superintendent or maintenance man today.  When he arrived at work he found the door of the Empire Carpet Company's office open and the safe's contents scattered around.  When office workers arrived, they reported that the burglars had made off with $28 in cash and $2,000 in Liberty Bonds belonging to the employees.  "The police found the burglars had entered over the roof," said The Times.

In 1924 the New York Edison Company purchased the building.   The electric company found an innovative use for the showroom space.  On August 17 that year The New York Times reported "In view of the increasing improvement of electric trucks for frequent-stop city delivery routes, the New York Edison Company has set aside a portion of its new showroom at 270 Canal Street for a permanent display of electric trucks, charging boards, and batteries."  The showroom was set up to show "three street trucks, two industrial trucks, together with charging and battery exhibit[s].  The exhibits will be changed every three months."

Eight months later a massive blaze engulfed the five-story building across the street at No. 269 Canal in the Knickerbocker Doll Company factory.  At least 24 firefighters were overcome or sickened by the noxious fumes.  A triage center was set up in the New York Edison Company showrooms, described by one newspaper as "an emergency hospital."

An equal number of firefighters would be overcome three decades later when fire broke out in No. 268-270 Canal Street.  By now the street was filled with second-rate stores crammed with flammable merchandise.  The ground floor of No. 268-270 was home to the Self-Service Cut Rate Store.


The fire broke out in the store's basement at 5:50 on the afternoon of August 28, 1959.  Responding firefighters dealt with scorching temperatures around 90 degrees, as well.  Before the fire was extinguished 25 firefighters had been treated for heat exhaustion and smoke inhalation. 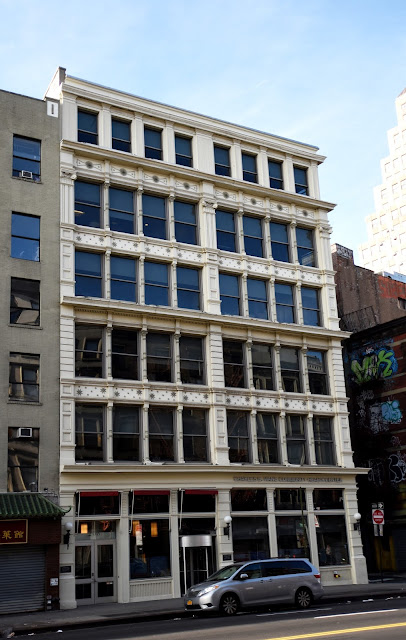 Like almost all of the cast iron structures in the Canal Street neighborhood, No. 268-270 suffered neglect in the second half of the 20th century.  But around 2000 it received a full exterior restoration, and today Lansing C. Holdens effervescent Queen Anne factory building shines.

photographs by the author
Posted by Tom Miller at 2:01 AM