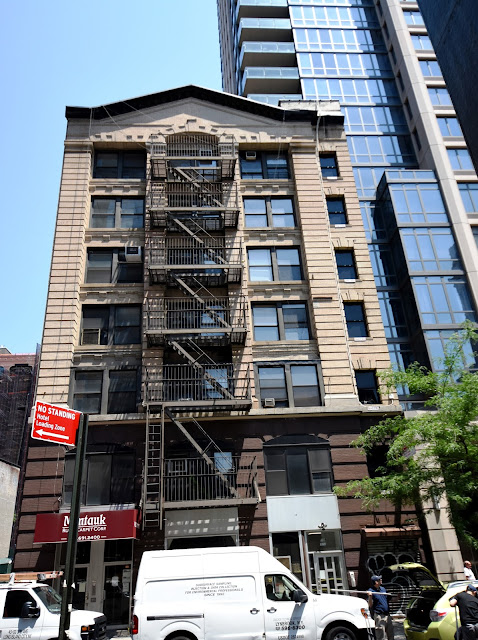 In 1886 Robert J. Horner opened his new furniture store at Nos. 61-65 West 23rd Street.  The block between Fifth and Sixth Avenues would include several of the leading furniture dealers by the end of the century, including George C. Flint and Geiger & Braverman.  Horner, who targeted both middle- and upper-class buyers, launched an innovative technique to attract customers: he installed bedrooms, dining rooms and parlors in the upper floors where furniture could be displayed in room settings.

Despite the Financial Panic of 1893, Horner’s success continued.  In the fall of 1899 he purchased two old buildings on the north side of West 24th Street between Seventh and Eighth Avenues from “a Mr. Barber.”  On November 5 the Real Estate Record & Builders’ Guide reported that “R. J. Horner & Co., the furniture firm…will built a 6-story storage house for their own use.”  The Guide pointed out that the firm had paid “$50,000 cash” for the 50-foot wide property at Nos. 109-111—in the neighborhood of $1.47 million in 2016.

R. J. Horner commissioned the architectural firm of George Edward Harding & Gooch (which often went simply by “Harding & Gooch”) to design its new building.  By the time that a contractor was hired six months later in May 1900, the plans had changed to seven stories.

The completed edifice smacked of a greatly expanded commercial stables building.  The extra-high two story base was clad in stone and featured wide truck bays.  Harding & Gooch used buff-colored brick on the upper floors, laid to resemble rusticated stone.  Here the five-story pilasters, the splayed lintels with their double keystones, and the stepped brackets of the sills were executed in brick.  Above it all a peaked pediment, similar to those routinely found on stables, completed the design.

Horner’s fleet of vehicles was stored and maintained on the lower section, while the upper floors were used both for storing the latest in furniture models and for manufacturing them.  During the day the building would have been a hive of activity as horse-drawn drays came and went, clattering along West 24th Street with their heavy deliveries of bedroom suites and dining room furniture.

There were about 48 workers in the building on Saturday, morning March 19, 1904; all but four of them working in the factory and warehouse portions on the upper floors.  Suddenly, at around 10:30 a “loud report” was heard on the second floor.  A container of benzine had exploded.

American Cabinet Maker and Upholsterer reported “Within a few moments great tongues of flame were licking the inflammable material stored on every floor, roaring up the stairs and shafts, and dense smoke rose on every side.”  Most of the employees were able to rush down the stairs before being cut off by flames; but about a dozen fled by jumping to the roofs of neighboring buildings.  One, however, had to be rescued after being paralyzed with fear.  “A young woman who had become hysterical when she saw that the stairs were blazing was dropped about ten feet by rescuers.”

Although firefighters responded quickly, the water pressure from the hydrants was nearly useless.  The trade journal explained “It was fully twenty minutes after the arrival of the first engines before a stream of any size could be sent into the building, and even then the pressure was not great enough to be effective.”

The water shortage resulted in four fire alarms.  The situation was compounded when two responding companies, Engines No. 18 and No. 72, collided at Sixth Avenue and 12th Street.  “There was a terrific shock, and all the horses were thrown.  Both of the poles of No. 18 snapped short, one of them piercing one of the horses of No. 72 and cutting him so that he had to be killed.”  Only Engine 72 could continue on to fight the blaze.

For two hours traffic on Sixth Avenue was held up and crowds of female shoppers—estimated in the thousands--poured from the emporiums on “The Ladies’ Mile” south of 23rd Street to witness the firefight.   American Cabinet Maker reported “The police had some difficulty in handling the crowds and in keeping them back until five mounted men were obtained from Fifth avenue.  Those who would pay no attention to the policemen afoot promptly retreated before the horses and kept at proper distance.”

The Police Department gained an important lesson in crowd control that day.  “It was the first time that mounted police were used at a fire in the heart of the city, and they demonstrated their usefulness.”

Although the upper floors were devastated, Harding & Gooch’s “fireproof” structure withstood the conflagration.  The trade journal announced “The upper portion of the building was gutted, but the structure proved most substantial, and remained almost intact from the outside aspect.”

Robert J. Horner estimated the damage at $50,000.  The building was repaired and operations continued until 1912.  That year, in February, the firm moved to No. 22 West 36th Street.  Robert J. Horner, Sr. explained to the Record & Guide that because of “the general tendency of all business to move farther uptown on account of the greater transportation facilities the firm decided upon the move.”

The former furniture warehouse and factory was taken over by a most unexpected tenant:  The Boyertown Chapel.  For six years it would be the scene of funerals and wakes amid the factories that had cropped up along the block.

On March 2, 1918 R. J. Horner & Co. leased the entire building to the Kimberly & Clark Co.  The Wisconsin paper manufacturers would store its goods here for years, getting a new landlord when the Robert J. Horner estate sold the building to Emil A. Stumpf on August 6, 1922.  The buyer made a quick profit when he resold it two months later to Clara P. Trunk for $105,000.

In 1945 Robert L Marx took the top three floors for his pipe manufacturing factory.  A printing firm was on the 4th floor and the lower three floors were used as storage.  The following year, with soldiers returning home from war, Marx became active in promoting the hiring of veterans.  He told a reporter “With the boys coming back today there is just as big a job to do as ever, and something should be done to bring attention to those companies that are making the real effort to give the veteran a job and make him a functioning part of our national economy.”

His proposal to “bring attention” to firms that hired veterans was a special flag.  His idea went all the way to the War Department where a design was approved by Secretary of War Robert P. Patterson.  The flag was unveiled in Robert Marx’s office in the 24th Street building on June 7, 1946, with members of the American Veterans Committee and the United States Employment Service present.

Joseph B. O’Connor, Regional Director of the United States Employment Service commended Marx’s idea.  The New York Times reported “Foreseeing support of the flag both on a local and national scale by his organization, Mr. O’Connell added: ‘Something like this is needed to stir up employers.  Also it would act as an incentive for them to do more than they are doing at the present time.’”

At mid century the ground floor was converted to the showroom of the Montauk Rug & Carpet company.  The upper floors were home to firms like the Continental Corp., manufacturers of wooden novelties; and the Frances Yarn Company. 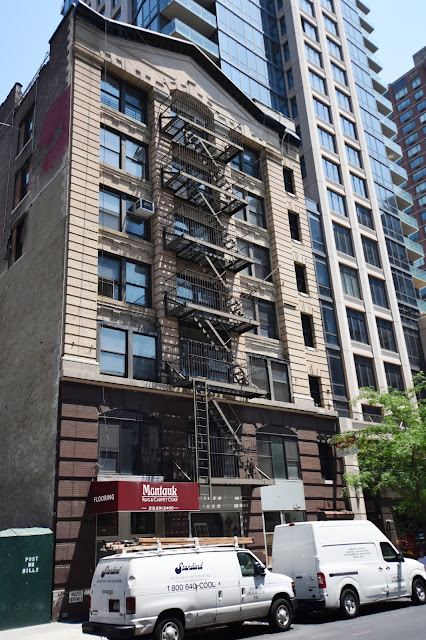 Little has changed to the upper floors of the handsome warehouse building.  An ill-advised coat of chocolate-colored paint covers the limestone base; but the Montauk Rug & Carpet showroom still calls the ground floor home after more than half a century.

photographs by the author
Posted by Tom Miller at 1:47 AM