On Tuesday, October 23, 1855 Sophie Gougenheim, the eldest daughter of A. M. Gougenheim, was married to Mario Manzocchi of Naples in the Roman Catholic Church of St. Vincent de Paul.  It would be among the last services held in the church, whose buildings engulfed the Canal Street blockfront between Lafayette Street and Broadway.


Daniel Devlin had big plans for the sprawling factory and store building he envisioned at Nos. 261-267 Canal Street that year.  He purchased the properties from the Church and began a two-year construction project.   Completed in 1857, the five-story Italianate-style building was faced in gleaming white marble above an elegant cast iron base.  The elegant structure held its own among the lavish retail palaces of the day.  The store fronts included fluted Corinthian columns with elaborate capitals.  Above, the architrave openings were decorated with triangular pediments, carved lentils and diminutive sill brackets.  Quoins ran up the sides.

The ground floor was divided into four individual retail stores.  Edward A. Nichols ran his silk goods shop from No. 263 in 1866.  He leased a back room of the second floor "in which goods are store by him before their examination and assortment," according to The New York Times.

The front office on that floor was occupied by an attorney's office, where William Trues worked as an office boy.  Just as one of Nichols's clerks, LeGrand W. Ketchum, reached the top of the stairs on Thursday, November 8, he saw William Trues leaving the storeroom, "with something apparently under his coat."

Alerted, Ketchum followed the boy, then found a policeman and had him arrested.  Trues had two bundles of silk valued at $165 under his coat--a heist worth more than $2,500 today.  He confessed to having stolen at least 10 other pieces of silk; but offered a credible excuse--at least in part.

Trues had taken his first stolen silk to a tailor, Wolff Holzmann, at No. 124 Walker Street.  Holzmann purchased the silk, then threatened to have the boy arrested if he did not continue to supply him with goods.  The felonious tailor soon joined Trues in jail, and both were held on $1,000 bail.

Another tenant of a store and upper floor space was Andrews, Sanford & Smith, who were in the building by 1870.  The firm manufactured ladies' hats upstairs, and ran its retail operation selling dry goods at street level.  That year it advertised for a "first-class milliner" to work in its shop.

The high-end stature of the store was evidenced following a break-in on December 25, 1870.  On January 7, 1871 Andrews, Sanford & Smith placed an advertisement in The New York Herald:  "Our store, 261 and 263 Canal street, was robbed on Christmas night of Velvets, Satins, Silks, black Ribbons, white and black Thread, Lace, &c.  The above reward will be paid for the recovery of the goods, or in proportion to what is found, and no questions asked."  That reward was a stunning $1,500, around $30,000 in 2016 dollars.

Daniel Devlin died in February 1868.  A clause in his will forbid the sale of any of his real estate before five years of his death; and then only "at public auction."  The heirs apparently waited impatiently for the deadline, and on January 10, 1872 the announcement of the forthcoming auction was announced.

Executors Henry F. Spaulding and Jeremiah Devlin noted "The stores were built by the late Daniel Devlin and are constructed in the most thorough and substantial manner, have modern improvements and conveniences and are capable of being sub-divided so as to accommodate a number of tenants."  They noted that the current annual rental income was $72,000.

S. N. Robbins operated his carpet store here in the early 1870s.  He was described by The New York Herald as "a gentleman of culture and refinement, and was highly esteemed by a large circle of business as well as personal friends."

On July 26, 1875 he left the store at around 3:00, as was normal.  But he never returned to the high-end Grand Central Hotel where he lived with his wife and two sons.  Mrs. Robbins and their youngest son were "in the country," as was the case with most moneyed families in the summer months.

Twelve hours later, at 3:00 in the morning, a policeman in Central Park near 102nd Street heard a gunshot.  The following day The New York Herald reported "on search [he] found Mr. Robbins lying in a cluster of bushes, dead.  He still held the fatal weapon in his right hand."

The Herald noted that for some time he had complained of  being "very ill," and added "He is supposed to have been suffering from a temporary aberration of mind."

Another upscale manufacturer in the building at the time was maker of ladies' and children's underwear, Bernard. King, on the third floor.  The quality of the firm's garments necessitated only the most qualified workers.  On February 1, 1877 it advertised for "A first class designer who has held the leading position with first class suit houses and is a guaranteed cutter and fitter."

Another carpet manufacturer, Eugene S. Higgins not only had his store here in 1878, he now owned the building.  The store at No. 261 was home to B. L. Coffin's "notions and white goods" business; and the store at 263 and 265 held the Hill Brothers' millinery and straw goods store.  On the second and fourth floors were Cohn, Ball & Co., makers of boys' and children's clothing.  Sharing the third floor with Bernard King was R. Elias & Co., shirt manufacturers, and the fifth and sixth floors at Nos. 261 and 263 were leased to the Lingerie Manufacturing Company.

Other tenants included William O. Headley & Sons, manufacturers of trunks, whose store was at No. 267; and Thomas Chatterton & Co., clothing dealers.

Just after 4:30 on the morning of March 26, 1878 fire broke out in B. L. Coffin's store.  The fire burned and spread for some time, finally reaching the upper floors where the flames were noticed.  By the time firefighters arrived, the structure was an inferno.  At one point Fire Chief Bates feared "the entire block would fall a prey to the flames," as reported by The Times.  Firefighters battled the fire until noon before finally extinguishing it.

The 1872 boast that the floors could be sub-divided was now blamed in part for the disaster.  Investigators said "Subsequently it was altered to suit the convenience of a number of tenants and lath and plaster partitions were erected, dividing the different floors."  The cheap materials added to the fuel.

The damaged was severe.  "The interior of the building above the store floors is destroyed and the roof is entirely gone.  A portion of the rear wall has fallen...The front and side walls are almost intact."  Extensive repairs were made and it was most likely at this time that the sixth floor was added.

On New Year's Day, 1892 the Canal Street building would become home to its most visible tenant, well-known carriage makers Studebaker Bros. Manufacturing Co.  The firm made and sold a dizzying variety of vehicles, as evidenced in an advertisement in The Sun later that year, on October 9.  It listed "High Grade Carriages, victorias, broughams, wagonettes, phaetons, surreys, buggies, runabouts, and all varieties of carts and traps.  Farm Wagons, express wagons, all kinds of business wagons."


In an age when dirt streets produced clouds of dust which entered windows and frustrated Victorian housewives, the ad noted "We invite special attention to our Street Sprinkler with new patented device for distributing water" and "Our 'Little Gem' lawn sprinkler excels anything in its line."

On October 8, 1894 The New York Times printed an article headlined "New from Track, Stable, and Salesroom."  In what was most likely a paid-for plug, the article included "Fancy driving traps of excellent quality, stylish design, and moderate prices, are a feature of the stock of Studebaker at 265 Canal Street." 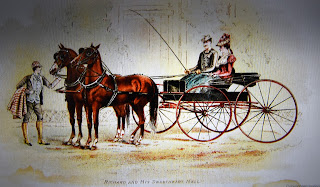 At the turn of the century, by August 1900, Studebaker had relocated a few blocks north to Broadway and Prince Streets.   The building now housed firms like the J. G. Shaw Blank Book Co., and D. Galewski & Co. which took two floors, comprising 20,000 square feet, in 1916.


D. Galewski & Co. had been located at Nos. 321-323 Broadway for 16 years, manufacturing traveling bags and suitcases.  Headed by Sigmund Galewski, it would remain here into the 1920s.

In 1917 Philadelphia-based paper manufacturer Whiting-Patterson Company leased the entire building from Eugene Higgins.  The Sun reported "The lessees will occupy a large portion of the space and sublease some of the upper floors.  Extensive alterations will be made to the building."


D Galeswki & Co. was still here in 1922 when another leather bag manufacturer, Samuel Bercowitz, tried to pull a fast one.  On October 7 Bercowitz asked Sigmund Galewski to cash a $900 note for him; which Galewski kindly did.  Later, however, he realized that the Bercowitz had carefully altered the numeral 1 on the note, changing $100 to $900.  Bercowitz landed in jail charged with grand larceny.

Two months later the Shoe and Leather Reporter revealed that Bercowitz's $15,000 bail had been reduced to $10,000.  The lowered amount was due to his sudden remorse.  The journal said Bercowitz's lawyer "told the court his client desire to be released from jail in order to make restitution."

The 1930s saw several of the tenants hit hard by the Great Depresion.  In 1937 Jovanis Sardelis declared bankruptcy, and in 1939 both Tri-Boro Engraving Co. and the Pioneer Metal Goods Mfg. Co went under.

The ensuing decades would see a wide variety of businesses in the building, including General Die & Stamping Corp. and Stransky Products Corp. in the 1940s; and Rosenblum in the early 1950s, whose "Magnetsik" was guaranteed to "cement everything, wood, celluloid, glass, metals, china, bakelite, marble, plastic."  For fifteen cents customers could try a sample.

Perhaps as devastating as the Great Depression was the aftermath of the 9/11 attacks.  There were ten apparel factories in the building.  With streets shut down for months and delivery trucks unable to get to the site, four of the garment companies had closed within a year. 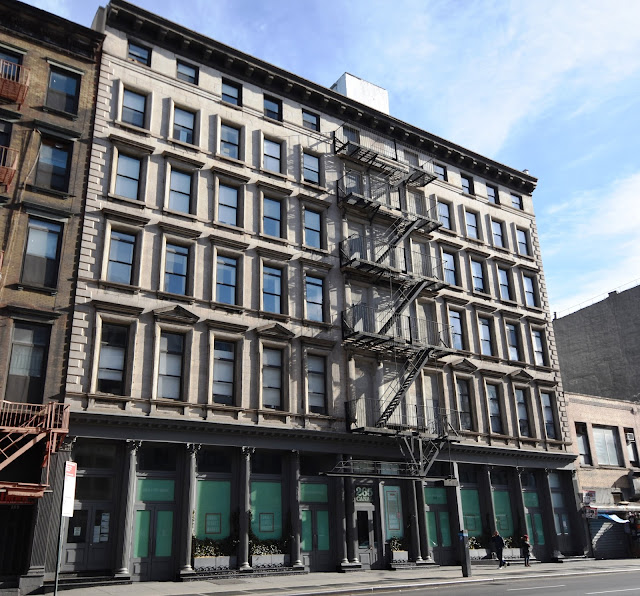 Eventually, of course, things returned to normal on Canal Street.  Recently a far-reaching restoration of the facade was initiated, headed by the architectural firm CTS Group.  The sorely abused ground floor has been rescued.  And other than the 20th century fire escape (which apparently is soon to come down), the remarkable marble building is much intact.