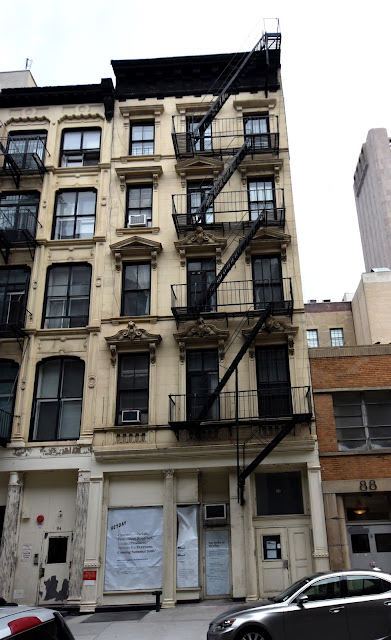 In 1876 a wooden house still stood at No. 92 Reade Street, a reminder of the pre-Civil War era when the neighborhood was quietly residential.  In the rear yard was a small brick shop building.  In February that year Mary E. Earle bought the property in foreclosure, paying $4,600 (around $105,000 today).

Mary apparently recognized potential in the rapidly changing district.  On October 30, 1877 the lot was advertised “For Sale at a Bargain…price, $16,000.”  The frame house and shop were sold and resold with lightning speed.  In August 1878 William Zschwetske took title from John E. DeWitte and his wife Naomi, who lived in Boston.

It was the end of the line for the old wooden house.  Zschwetske cleared the lot and commissioned architect John B. McIntyre to design a modern commercial building.  The two-man team wasted no time.  Plans were filed the first week of September for a “five-story white marble store.”

McIntyre’s work covered a broad range of structures, from small brick and stone commercial structures to substantial loft buildings.  For this project he blended popular styles to create a quintessentially Victorian beauty.

The loft and store building was completed at a cost of $15,000.  Four floors of gleaming white marble sat above a cast iron storefront.  At street level flat paneled side pilasters and fluted Corinthian columns framed an offset retail space and a wide entrance to the upper floors.  The building’s relatively narrow 25-foot width prompted McIntyre to install a clever side panel to the loft entrance which, when opened, transformed the door into a wide service entrance capable of accommodating large items.

The upper floors took on a near-residential tone.  Tall windows at the second floor sat behind  pseudo-balconies with blind openings.  They were crowned with lusty marble French Second Empire pediments supported by leafy scrolled brackets.  Carved medallions were encased in scrollwork which rolled over the top like a cresting wave.   With each succeeding level, McIntyre gradually reduced the grandiosity of the window treatment.  He gave the third floor one centered Second Empire pediments, flanked by two reserved triangular Renaissance Revival pediments.  The fourth floor had a single Renaissance pediment, and two shelf-like lintels.  The scrolled brackets became slightly diminished at this level.  And on the top-most floor three projecting lintels were upheld by unadorned brackets.  Above it all a rather mundane pressed metal cornice crowned the design.

William Zschwetske, who lived in Elizabeth, New Jersey, transferred title to the new building to his wife, Augusta, on March 1, 1879.  Less than two years later, on January 3, 1881, the couple sold No. 92 Reade Street to Charles Fries for a satisfying $32,500.

Fries was the head of the chemical manufacturing firm Alexander Fries & Brothers.  Born in Bavaria in 1831, he came to New York in 1849 and co-founded the company with his brothers.  The firm specialized in scented oils and artificial food flavorings.

At the International Exhibition of 1876 Alexander Fries & Brothers was commended for its “ethers and essences and oleo-margarine.”  The committee admired “the variety and chemical purity of artificial ethers exhibited, and for delicacy of flavor of fruit essences produced from them; also for production on a large scale, from fresh bullocks’ fat, of an excellent butter substitute known as oleo-margarine.”

Alexander Fries & Brothers produced aromatic chemicals like Oil Wintergreen, Rhondinol II which “replaces perfectly best natural Oil of Rose,” and Heliotrophine Crystals “sachet formula.”  In 1893 the firm, now known as Fries Bros., was working “to improve the quality of tobacco by the use of flavors,” and soon delved into the flavoring of liquors.

Fries Bros. initially rented space in the building to at least one other small business.  Haines & Underhill, “manufacturers of sheep leather,”were here in 1882.  In the meantime the ground floor store was home to the shoe store of Fridberg & Adler.

Otto Fridberg had arrived in New York from Mainz, Germany around 1877.  He became a naturalized citizen and found a high-paying job as a traveling salesman for a wine company.   Then he fell in love and married.  His brother-in-law, Dr. Jacob H. Asch, later explained “His love for her was almost morbid.  When he married he gave up his position as a traveling salesman…and bought the Reade-street shoe business that he might remain in the city to spend his spare time at home.”

Fridberg and his bride moved into a home at No. 164 East 105th Street.  But their idyllic love story quickly developed problems; greatly enhanced by Otto Fridberg’s sensitivity.  When two babies were born within a year, “it caused some remarks and touched Mr. Fridberg’s sensitive nature,” reported The New York Times later.

And in stark contrast to his happy home life, things were not harmonious at the shoe store.  Dr. Asch recalled “all went well until Mr. Fridberg discovered that his partner in the shoe business was not congenial to him.  The fact that they were not suited for one another worried him unnecessarily.”

Nothing, however, could have been more devastating to Otto Fridberg than the death of his beloved wife in 1884, “which changed his spirit.”  Asch explained “His friends thought that the gloom would pass away in a few months, as the children—a boy and girl—were bright and interesting, and their father seemed to idolize them.  In fact he showed such extraordinary attachment for them and spent so much of his time caring for them that his business was neglected.”

The doctor advised his brother-in-law that “his mind would be affected” if he “allowed his fondness for the babes to pass beyond the bounds of reason.”  Fridberg simply replied that he wanted to get out of the shoe business.

By now Otto Fridberg and the children had moved into the Asch residence, at No. 207 East 58th Street.  On the morning of June 28, 1885 he left the house; but he did not show up at the shoe store that day and he never returned home.  The police were notified by Dr. Asch asked that a “general alarm” not be sent out yet, saying that “a man who had more than an ordinary father’s affection for his children would surely return to them.”

Two weeks passed with no word.  Then Dr. Asch picked up The New York Times on July 12 and saw a small headline “Otto Fridberg Found Dead.”  With a dateline of Cape May, New Jersey, the article succinctly reported that the shoe dealer “was found dead in his room at the new Columbia Hotel here to-night.  He was suffocated by escaping gas.”

Authorities had tied to find relatives; but when they went to Fridberg’s old address no one knew where the family had relocated.  Dr. Asch called the death of the 35-year old “a sad mystery—sad because he had been unhappy, and mysterious because no one understood him nor the melancholy which seemed to blight his life.”

The shoe store was taken over by Morton F. Copeland.  In advertising its $2.50 shoe, the M. F. Copeland store promised “every piece of stock is tanned expressly for this shoe.”  M. F. Copeland manufactured its stock on an upper floor here, and asserted “Our lasts and patterns are the very latest, most stylish and best fitting ones used by the finest makers, and none but the most thorough workmen are employed.”

On Saturday, February 16, 1889 two veteran thieves broke into the Copeland factory.  Thomas Hanley also went by the alias Thomas Cleary; and his cohort, George Morton was known both as George Wilson and “Big Tommy.”  The men hired an express wagon and parked it in front of No. 92 Reade Street.  The rig was necessary to handle the amount of their anticipated haul.

After using a “jimmy” to break into the loft; they gathered up boxes of merchandise.  But just as they were leaving with 32 pairs of shoes, they were met on the stairs by Detectives Cottrell and Alonchle.  A struggle ended with shoes and men toppling down the stairs.  Alonchle was badly bruised from his fall down the stairs; but while his injuries were serious enough to land him on the sick list for a few days, they did not prevent him from taking his prisoner to headquarters.

M. F Copeland’s boot and shoe business seemed to be doing well.  And so when the firm’s bankruptcy was announced on April 23, 1891 it “caused a genuine surprise,” according to The New York Times the following day.  The embarrassment of bankruptcy was made worse three months later when Copeland and his brother, Harry, were charged with fraud.

By 1894 Charles Fries was leasing space in the building to E. Lothar Schmitz, manufacturer of safety razors.   The Fries brothers formed another firm, the Torsion Balance Company by 1899 which manufactured a variety of scales: milk scales, drug scales, and textile scales among them.

In 1898 the health of Charles Fries began to fail.  On February 21, 1900 he died at the age of 69 in his home at No 15 West 82nd Street.  The operation of Fries Brothers passed to his nephew, Dr. Harold H. Fries, a son of Alexander Fries.  He also became the President and Treasurer of the Torsion Balance Company.

In the 1920s, when Harold Fries transferred title of the building to his Torsion Balance Company, another scale manufacturer, Becker Christian, was in the building.   Becker Christian sold its “balances” from the Reade Street location, while its factory was in Jersey City, New Jersey.

Dr. Harold H. Fries died at the age of 80 on June 30, 1946.  Although tenants changed throughout the rest of the 20th century--including the Yorktown Electrical Supply Co., for instance—the striking marble building did not.   In 1982 it received a splash of color after Port Richmond High School senior Fran Peduzzi won the “Paint a Bright Future for New York” contest.  The aspiring Staten Island artist was one of 200 finalists from city high schools in the competition sponsored by the Hudson-Shatz Painting Company.  Her winning mural was applied to the side of No. 92 Reade Street in November that year.

The mural was just one sign of the changing personality of Tribeca.  Art galleries, restaurants and trendy shops were taking over the former factories.  The same year that Fran Peduzzi’s artwork appeared on its eastern elevation, No. 92 was converted to residences above the ground floor store—just one spacious apartment per floor. 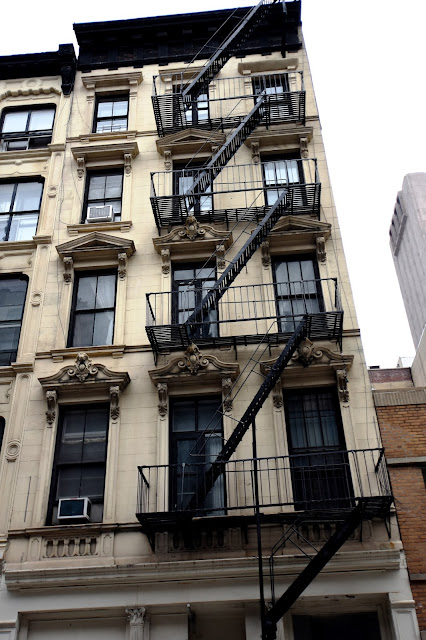 Although a bit scruffy, the 1879 storefront survives surprisingly intact.  And above, partially obscured by a regrettable zig-zagging fire escape, John B. McIntyre’s robust Victorian design remains a show-stopper.