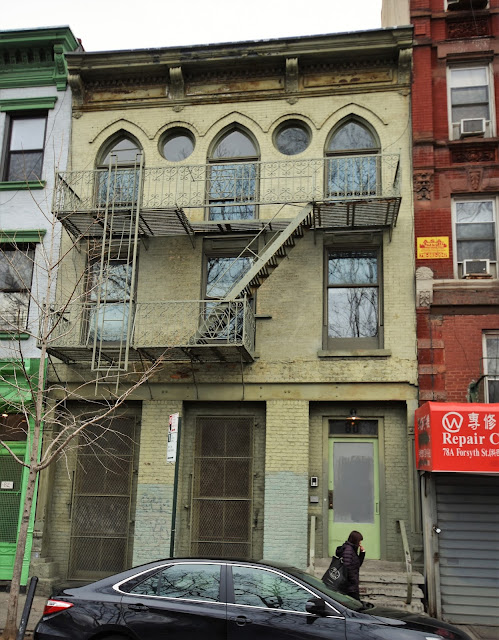 By the Civil War years, thousands of immigrants were pouring into the Lower East Side.  The three-story brick house at No. 80 Forsyth Street and the little two-story dwelling in its rear yard were home to a few of them.  The family of one tenant in the back building, however, had been in New York at least for one or two generations.  In her advertisement for work in The New York Herald on October 3, 1865, she clearly differentiated herself from her neighbors.

By 1874 the property was owned by the Schwartz family.  That summer C. Schwartz hired builder A. Shappel to convert the front house to accommodate a store for Anthony Schwartz.  The alterations cost $200.   Schwartz described his shop as selling "furniture, &c."  And he proudly listed "two pianos" among the inventory the following year--surprisingly upscale items in the impoverished neighborhood.

At the time the immigrant population in the neighborhood was changing.  Between 1859 and 1880 the number of Jews who settled in New York City had doubled--from 40,000 to 80,000.  Before the turn of the century, Forsyth Street--only about eight blocks long--would see the arrival of several synagogues.

Their renovations made the old brick structure nearly unrecognizable, other than the Italianate pressed metal cornice.  Two story Gothic-arched windows at the upper floors were separated by round openings--all of them filled with stained glass originally, no doubt.  They were united by a single, slightly protruding brick eyebrow.  Wrought iron fire escapes incorporated stars of David into the design.


The conversion, completed by summer of 1882, included a mikveh, or ritual baths, on the ground floor where Anthony Schwartz had exhibited his two pianos.  Congregation Kol Israel Anshe Poland did not intend to operate the baths, however; and in August signed a 10-year lease with Solomon B. Oschinsky, charging him $400 per year.  What must have seemed to be a savings of time, expense and trouble would cost the synagogue in the end.

The City taxed the congregation $670.30 on the property every year from 1881.  So Congregation Kol Israel sued in 1885, "asserting that as the property was used for religious purposes, it ought not to be taxed," said The New York Times.

Prior to the trial, which was not held until May 2, 1888, the City did some investigating.  While "the congregation said that the baths were a feature of its religious ceremonies and that the expense of sustaining them was defrayed by the members of the congregation," officials found that Solomon Oschinsky was operating it as a business.

"But the city proved that the baths were used, not only by the members of the congregation but by all Hebrews who wished to use them," reported The Times.  Upon that evidence, Judge Lawrence decided that the synagogue was liable for the taxes.

All the while the synagogue was the scene of weddings, funerals and services.  Later that year, for example, on October 18 the "happy synagogue wedding," as described by The Evening World, of Rachel Rosenthal to J. Doniger was celebrated here.

The somewhat lavish event was in stark contrast to the often-gritty surroundings.  The newspaper noted "The bride wore a dress of white satin, with trimmings and draperies of cream plush and white lace.  A long bridal veil was fastened in her hair by a wreath of orange blossoms.  Her ornaments were diamonds and pearls."  After the ceremony the guests "were received in Everett Hall, where they sat down to a bountiful supper, after which they danced for several hours to the music of Wollenberg's orchestra."

Among the first congregants in the synagogue were Samuel A. Samuels and his wife.  In 1882 he purchased two pew seats, both given the number 10.  A clause in the pew deed clearly noted that should the congregation ever relocate, "the said Samuel A. Samuels shall be entitled to the same seat in such other Synagogue."  The trustees of the congregation apparently did not take the wording so literally as did Samuels.

In 1892 Congregation Kol Israel Anshe Poland sold the synagogue, as it moved into its new, expansive shul at Nos. 20-22 Forsyth Street.  Samuels was enraged when he realized that the pews allotted to him and his wife were numbered 20--not 10--and he demanded his rightful numbers.  The trustees refused, explaining that the relative location of the pews was the same, just not the numbering.

Samuels was unmoved and sued Congregation Kol Israel Anshe Poland to "redress the wrong which he claims to have suffered by reason of not having been allotted seats No. 10," according to court papers.  Although lawyers for the synagogue argued that the wording "same seat" referred to location and not specific number; the courts ruled in favor of Samuels.  What is unclear is whether the synagogue had to renumber all the pew seats; or whether Samuels and his wife were simply relocated.

In the meantime, No. 80 Forsyth Street became home to Beth Hamidrash Sha'arei Torah, also known as Sharo Torah.  An early New York congregation, it had been formed in 1856.  In 1906, the same year it celebrated its jubilee, it hired architect Nathan Langer to make "extensive alterations" to the synagogue, as described by the Record & Guide on March 24.

Many of the tenements in the neighborhood were dangerous firetraps.  Such was the case with the five-story building at No. 69 Forsyth Street, nearly opposite the synagogue.  At around 3:30 on the morning of June 21, 1925, fire broke out here.  The New York Times reported "All the six families in the house were aroused from sleep to find their rooms ablaze at the side and rear, and exit by the stairs cut off by flames that extended from the street level to the top." Among those trapped were the widow Freda Marks and her three sons, one of whom was an invalid, on the fifth floor.

Because the fire originated in the entrance hall on street level, the wooden stairs quickly burned through all the floors.  One of Mrs. Marks's neighbors, Louis Rosen, lived on the second floor with his wife and two children.  He later told reporters that he "opened his door to the hall and stair and was met by a gust of flame.  There were no rear fire escapes and his rooms at that end were afire."

Rosen tossed his children from the front windows to the arms of men on the sidewalk.  Then he lowered his wife and dropped her before jumping to the street himself.

Firemen found the Marks boys, 19-year old Alexander, "a semi-paralytic," Theodore and Benjamin all unconscious on the floor.  The Times reported "Mrs. Marks, who was 55 years old, was found dead on her bed, suffocated by smoke."  With the smell of smoke from the burned out building still pungent, the funeral of Freda Marks was held in the synagogue later that afternoon.


By 1930 Sharo Torah would leave Forsyth Street and by 1946, when the Manhattan Store Fixtures Company purchased No. 80 Forsyth Street, it was described as a "loft building."  The neighborhood would see incredible change beginning in 1965.

In 1882 the Government had passed the discriminatory Chinese Exclusion Act which essentially banned all immigration from China.  The restriction was slightly eased in 1943 when exactly 105 Chinese per year were allowed.  Then, in 1965, the Federal Government did away with the quota system and, as had been the case with Eastern and Middle Europeans a century earlier, Chinese arrived by the thousands and settled in the Lower East Side.

Two years before the change in immigration law, the former shul at No. 80 Forsyth Street had been purchased by abstract artists Milton Resnick and his wife Pat Passlof.  They converted it to two apartments--a duplex in the basement and ground floor, and another on the top floors.


Resnick and Passloff lived in worked out of No. 80.  His works are represented in prestigious galleries like the Smithsonian American Art Museum in Washington D. C., the National Gallery of Art, and the Museum of Modern Art in New York City.  Passlof, an abstract expressionist, had studied with Willem de Kooning.  Resnick died in 2004; and Passlof died of cancer at the age of 83 on November 23, 2011.

The building was sold in 2013 to, according to a Wall Street Journal article, "help fund a foundation to showcase [Resnick's] artwork and advance the legacy [Pat Passlof] thought he deserved."  The sale helped form the Milton Resnick and Pat Passlof Foundation, a non-profit organization to preserve, exhibit and publish works by the two artists, was well as "other painters working out of that tradition." 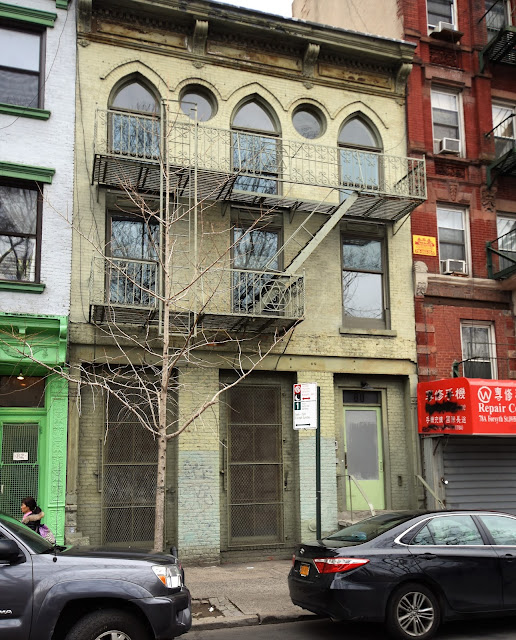 Today the former synagogue is painted an industrial green, and is surrounded by vinyl awnings with store names printed in Chinese characters.  The venerable structure which has seen such tremendous change is easily overlooked by the casual passerby.