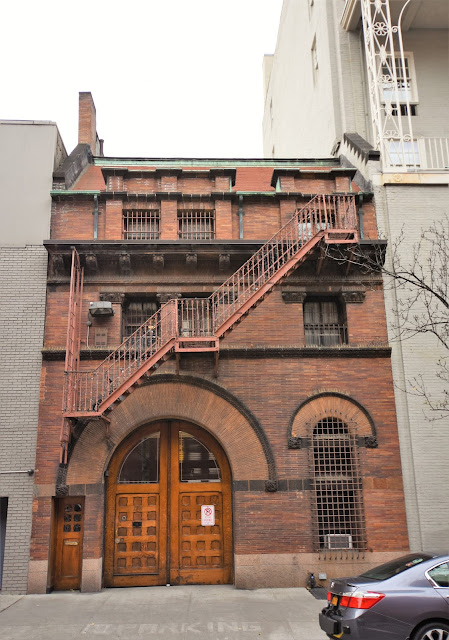 In 1889 architect Charles C. Haight set to work on two mansions designed to appear as one, at the northern corner of Fifth Avenue and East 66th Street.  The hulking residence for millionaire Henry O. Havemeyer would sit at the corner and face sideways, taking the address No. 1 East 66th Street.  Its matching, smaller brother, at No. 852 Fifth Avenue would become home to bachelor Oliver Hazard Payne.


Once in their grand homes, the two moguls addressed another need, their carriage houses.  In June 1895 Havemeyer purchased the three-story house at No. 134 East 66th Street, between Park and Lexington Avenues, from Edgar Davidson (the address would later be renumbered No. 126).  It completed a plot necessary for two lavish private stables--one for himself and the other for Payne.

Havemeyer was obviously in charge of the project.  He owned the land and it would appear he chose the architects, S. E. Gage and W. J. Wallace.  Wallace was his cousin.  The two stables, designed to appear as a unit, were completed in February 1896.  The behind-the-scenes dealings between the two neighbors were obvious when Havemeyer transferred title to the "three story brick stable" on February 26.  The price listed was "nominal."

The architects had created harmonious Romanesque Revival structures of light-colored Roman brick, trimmed in brownstone and terra cotta.  Like his mansion, Payne's carriage house was a smaller version of Havemeyer's.  Only about half as wide at 28 feet, it was nevertheless spacious and functional.


In 1900 Munsey's Magazine described the interior as having "tiles and polished wood and wrought metal of modern magnificence," and depicted its "church-like solemnity, where ten or a dozen traps may repose at once in dignity and comfort; the harness cupboards with plate glass doors, and the velvet lined cases for the shining bits and buckles."

Upstairs were the living quarters for Payne's stable staff.  "The coachmen and grooms are no less well treated than the aristocratic beasts they serve, for their quarters overhead abound in hard wood, enameled tubs, shower baths, and all the comforts of modern heating, ventilation, and plumbing."

Two years later, in an article about Manhattan's lavish private carriage houses being outfitted with modern "sanitary science," Engineering Review mentioned "the private stables of New York's horse-loving millionaires have become celebrated by reason of the addition of such well-known stables as those of H. O. Havemeyer and Colonel Oliver H. Payne at 134 and 136 East Sixty-sixth street."


Born in Cleveland, Ohio on July 21, 1839, Payne was named after Oliver Hazard Perry, a relative of his mother, Mary Perry.  He earned his title Colonel during the Civil War in the 124th Ohio Infantry.  Following the war, he invested in iron and oil refining.  When Standard Oil acquired his interests around 1868, he became the treasurer of that firm.  He assisted in the formation of U. S. Steel and organized the American Tobacco Trust.  By the time he moved his horses and fleet of vehicles into the 66th Street structure he was considered among the 100 wealthiest men in the United States.

The mothers of Manhattan's debutantes may have had high hopes to snag Manhattan's most eligible bachelor, but marriage was not in Payne's future.  And while he enjoyed his massive fortune, building the world class steam yacht Aphrodite in 1898, for instance, he was lavishly generous to his family.

He gave his sister in Ohio "a beautiful home in the outskirts of Cleveland, besides providing for the education of her children," according to The Sun, and he built a Fifth Avenue mansion for his other sister, Mrs. William C. Whitney.   When her son, Payne Whitney, was married to Helen Hay in February 1902, he presented the couple with a stunning wedding present--a marble mansion at No. 972 Fifth Avenue designed by McKim, Mead & White.

Oliver H. Payne's name appeared in newspapers in 1914 when the list of Americans earning more than $1 million per year was made public.  That amount would translate to about 25 times that much today.  His philanthropies were well-known, although he "would never discuss it," according to The Sun.  In 1913 he gave $4,350,000 to Cornell University, where he had already established its medical school.  His gifts to the university would top $8 million in his lifetime.

The bachelor millionaire died in his Fifth Avenue mansion on June 27, 1917 at the age of 78.  His holdings in the Standard Oil Company alone were estimated at the time at a staggering $90 million.  His will left large gifts to institutions like the New York Public Library, the Lakeside Hospital in Cleveland and Dale University, each of which received $1 million.   The Metropolitan Museum of Art received gifts, including a priceless late Gothic tapestry.  The Sun reported that it "has the exceptional interest of being signed by Jan Van Room, also called Jan Van Brussel, who was painter to Margaret of Savoy, Regent of the Netherlands (1507-1530)."

Payne Whitney's share of the estate was significant.  He received all of his uncle's "chattels, furniture, pictures, silver, china books, and personal effects, all his interests in social, shooting or fishing clubs, as well as his yacht and the country place called 'Greenwood Plantation" in Thomasville, Ga., and all other real estate except the place in Ulster county," according to The Sun on July 7, 1917.  Among "all other real estate" was the carriage house on East 66th Street.

By 1920 Payne Whitney's fleet of vehicles had a different type of horse power than his uncle's.  Cabriolets and broughams had been replaced by touring cars and limousines.  Louis Weiniger was Whitney's chauffeur and he lived upstairs in the former carriage house.  On September 16, 1920 he drove his employer to Wall Street.

Domestic terrorism had gripped Manhattan for two decades.  In the early years of the 20th century it was anarchist groups like the Black Hand which were responsible for bombings and murders.  Now communist agitators plotted deadly attacks.  Just before noon that day, Louis Weiniger was parked in an unfortunate spot.

In the equivalent of today's car bombings, a horse-drawn wagon containing 1,000 pounds of dynamite and 500 pounds of iron sash weights and other shrapnel pulled up to the J. P. Morgan building at No. 23 Wall Street.  The subsequent blast was fearsome, blowing out the glass panes of office buildings for blocks. There were 30 immediate fatalities and hundreds of injured. Six more would subsequently die of wounds.

Payne Whitney's chauffeur was among the luckier victims.  He was treated for scalp wounds received from flying debris.

When Whitney died on May 25, 1927, he left what The New York Times declared "The largest estate ever appraised in this country"--$178.893,655, or about $2.5 billion today.  Much of his wealth was held in stocks.  The newspaper noted that "This enormous volume of stocks...grew from a fund of many millions set aside some years ago for Mr. Whitney and others by Mr. Whitney's uncle, the late Colonel Oliver H. Payne."

At the time of his death, the carriage house was valued at $80,000.  It passed to Whitney's son, John Hay Whitney.   Almost unique among personal stables of the 19th century, No. 126 East 66th Street continued to be used as a private garage.  In 1969 John Hay Whitney housed his nine vehicles here.  That year the AIA Guide to New York City noted "Rarely does even consciously monumental architecture achieve such power."

Somewhat sadly, by the time the editors Norval White and Elliot Willensky made the comment, the Havemeyer carriage house had been demolished, leaving the Payne stable looking a bit off center and squashed.

Whitney died in 1982.  Known familiarly as Jock, his remarkable and varied career included U. S. Ambassador to the United Kingdom, publisher of the New York Herald Tribune, president of the Museum of Modern Art, and chairman of the board of Selznick International Pictures.  He funded half of the production costs of Gone with the Wind, and for the 1940 film Rebecca.

The Payne carriage house continues its original purpose today--a garage on the ground floor and a single residence above.  While it could stand a facade cleaning, its continuous use by a single family has resulted in its nearly perfect preservation.