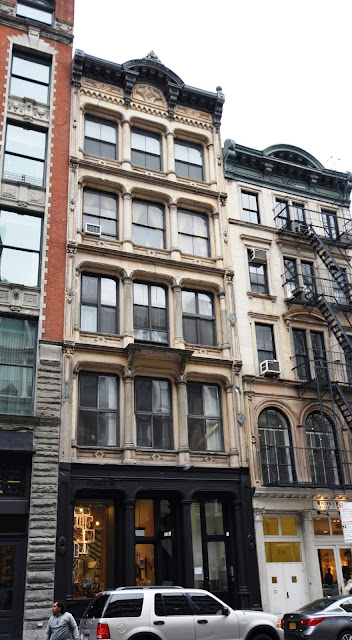 The house at No. 510 Broadway which had been home to Thomas F. Cornell in the 1830s, was being used as a medical office by 1841.  Dr. John H. Whittaker shared the building with Dr. Granville Sharp Pattison.   In 1842 Dr. Whittaker agreed to testify to the good character of a friend who was looking for employment.  An advertisement in the New-York Daily Tribune read “A married man wants a situation as Salesman or Clerk in a Wholesale Grocery, Wine or Spirit Store—has been at the business for fourteen years, and understands his business perfectly.  For character and capability I refer to John H. Whittaker, Esq., M. D., 510 Broadway.”

Dr. Whittaker remained in the former house at least through 1845.  That year Dr. Pattison was no longer here, but Dr. Arnold F. Wainewright listed his practice at the address.  Another physician, John M. Swift, had his office in the building by 1869.

By now this stretch of Broadway—once a fashionable residential district—was being overtaken by commerce.  In January 1866 Samuel and Abraham Wood paid about $115,000 for No. 510 and contracted architect “Mr. Alexander” to design a new business building.

But problems soon arose.  Court papers from 1873 revealed that, first, “There was an objection by Abraham Wood to fronting the store with colored marble.”  Alexander’s plans were rejected.

But before new designs by Isaac P. Duckworth could be made, neighbors stopped the process.  “Four suits were commenced against Abraham and Samuel Wood, in regard to injuries arising out of the construction of this building.”

And in the meantime, Alexander sued the Wood brothers for breaking his contract.  No. 510 Broadway had become a major headache for the real estate developers.  As the snarl of law suits continued, the “House and Lot” and plot were valued at $108,309.  The assessment, more than $2 million in 2016 dollars, reflected the changing character of Broadway which now saw the rise of modern loft and store buildings.

The Woods leased the property to Heymann & Sons who succeeded where the brothers had failed.  The developers commissioned architect William Bloodgood in 1878 to design a commercial building on the plot.  In the 12 years that had passed since the Woods had bought the property, the last of the residential neighbors had moved on.  There would be no lawsuits against Heymann & Sons.

Construction began on July 3, 1878 by builder Freeman Bloodgood (sometimes erroneously listed as “Freeman & Bloodgood”) and was completed on September 12 the following year.   It is unclear whether Freeman and William Bloodgood had a family connection; but the men had worked together two years earlier in building the Academy of Medicine.

The commercial facade was similar to the many cast iron buildings going up at the time.  But William Bloodgood clad No. 510 Broadway in stone above the cast iron storefront.  The iron piers of the ground floor were duplicated in stone on the upper floors.   Engaged columns separated the openings and an attractive balcony provided dimension at the third floor.  A robust cast cornice sat above a carved corbel table and decorative panels. 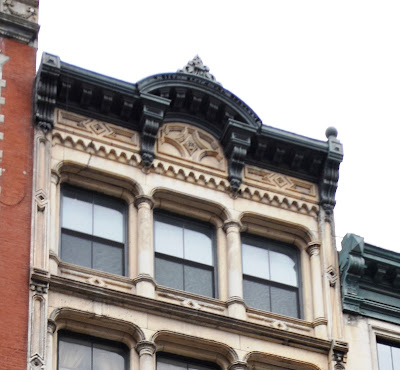 Among the tenants in the building in 1893 was Ketchum & Jonas, cloakmakers.  In the fall of that year Saul Ketchum and Julius Jonas realized that the financial condition of the company was irreparable.  But before they declared bankruptcy, they attempted to skim funds for their own use.

In November 1893, a few days before announcing their bankruptcy, “they prepared a false set of books, in which a considerable part of their assets was made to disappear,” reported The Sun.  “The false books, it is alleged, are in the handwriting of Ketchum.”

Unfortunately for the devious pair, their bookkeeper, Charles J. Halfer, was more honest.  He alerted authorities of the hidden $10,000.   Julius Jonas was arrested in July 1894.  He pleaded not guilty of “removing and secreting account books.”  His partner, Saul Ketcham, was in even bigger trouble.  He was charged with three counts: “alteration of books with intent to defraud, disposing of property with the same purpose in view, and grand larceny in the second degree.”

Others were arrested as well, including their attorney Abraham Josephs and clerk Harry Jacobs for “aiding and abetting the commission of crime.”   When their scheme was uncovered and police on their tails, Ketchum and Jonas were first hidden for several days in the attorney's house.  They were then moved to Jacobs’s house in Brooklyn.

While Jonas sat in jail, investigators were still looking for his partner.  On July 23, 1894 The Evening World reported “Mr. Ketchum avoided the detectives on Saturday night, and has since kept out of sight.”   Later that same day Ketchum gave himself up.

One tenant not involved in the apparel trade was Hunninghaus & Lindemann, makers of window shades.  In 1897 two Lower East Side retailers, Herman Rappaport, whose shop was at No. 124 Attorney Street, and Max Fishman at No. 430 Grand Street, concocted a plan to acquire window shades at a sizable discount.

Stephen Hart worked for Hunninghaus & Lindemann as a shipping clerk and Charles Wuest was the firm’s errand boy.  They were approached by Fishman and Rappaport with a business proposition.   The men offered to buy stolen window shades from the boys.   To deflect suspicion, they had rented a basement on Attorney Street to receive the goods.

By the time Hnninghaus & Lindemann discovered the thefts, the firm had lost more than $2,000 in goods.  Stephen Hart, 18 years old, and Charles Wuest, 19, were arrested on July 16, 1897 and charged with grand larceny.  They were quick to blow the whistle on Rappaport and Fishman, saying they “induced them to steal and bought all of the goods from them.”

The retailers claimed innocence and said they had no idea that the goods were stolen.

Also in the building were Becker & Co., makers of women’s waists—the most popular piece of apparel in the country; and Weinelbacher & Rice who called themselves “the largest glove importers in the country.”

In the first decades of the new century Goldwater Bros., “laces and embroideries,” was here; as was the American Trunk and Bag Company.   And by 1922 41-year old Samuel Zuckerman had his office and tie-manufacturing firm on the second floor.

On the night of Saturday, March 18, 1922 fire broke out in Zuckerman’s factory.   Among the first respondents was Lieutenant William Coles of the Fire Department Bureau of Investigation.   When the blaze was extinguished, Coles set to work.  And what he found was disturbing.

He reported that “he found two fires had been started in the factory, ten feet apart, and that he found the safe stuffed with paper and silk soaked in benzene.  There was no money in the safe.”

Detectives went to Zuckerman’s home on South 4th Street in Brooklyn to question him about the suspicious evidence.  The tie manufacturer claimed he “knew nothing about the benzene.”  But he was then showed a receipt for two gallons of the liquid that was recovered from the site.  Suddenly he recalled the purchase.

“When confronted with the receipt, he said he had sent an errand boy to get benzene one gallon to be used at his home, the other to clean silk at his factory,” reported the New-York Tribune on March 20.  Unknown to Zuckerman, detectives had already interrogated the retailer who had “identified Zuckerman as the person who had bought the benzene.”

Samuel Zuckerman was taken from his house in handcuffs, charged with suspicion of arson.

The handsome building at No. 510 Broadway survived the rest of the 20th century without major change.  At some point the railing of the balcony was lost and although the cast iron storefront had been slightly updated, it has been recently restored.  In 1976 the upper floors were converted to “joint living/work quarters for artists.”