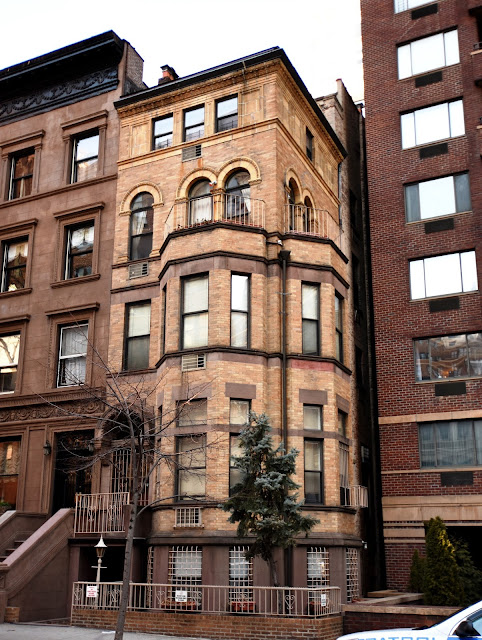 The population of the newly developed Upper West Side—called by some a “new city”—needed schools, fire and police stations, and churches by the 1890s.  Among the first of the churches to move north was the Protestant Episcopal Christ Church.

Organized in 1793 it had stood at Fifth Avenue and 39th Street for many years before erecting what The New York Times called a “beautiful” structure on the Boulevard (later renamed Broadway) and 71st Street.  The newspaper noted in 1895 “it has been identified prominently with the religious movements of the city.”

Now relocated, the church needed a parsonage for its rector, the Rev. Jacob S. Shipman.  Alfred Abraham and his wife, Adelaide, and daughter, Theresa, had lived in the four-story brownstone home at No. 213 West 71st Street for only three years.  But its situation directly behind Christ Church made it a perfect choice.

The church purchased the relatively-new rowhouse, demolished it, and commissioned architects Rose & Stone to design a new residence.  Rev. Shipman had been rector of Christ Church since 1877 and, like other pastors of fashionable churches, he lived in grand style.  The new house would reflect the social station that accompanied his ecclesiastical position.

Completed in 1892, the Shipman house exerted its individuality on a block of identical brownstone-fronted homes.  Rose & Stone clad the four-story structure in beige brick trimmed in brownstone and terra cotta.  Taking advantage of the church lot, the architects were able to create two exposed facades; an advantage providing extra sunlight available normally only on corner lots.  The Renaissance Revival design featured two-story faceted bays at the corner which sprouted balconies at the third floor; and a decorative terra cotta cornice.  But perhaps stealing the show was the robust Renaissance-style hood over the entrance. 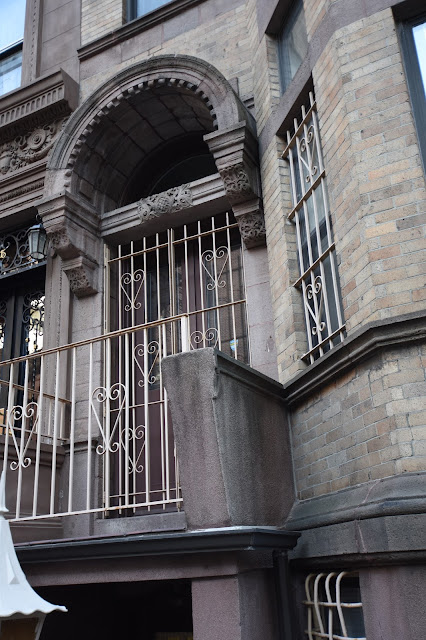 Moving into No. 213 with the minister and his wife, Anne Louisa, were their last unmarried daughter Laura; and Herbert Shipman (who was, not coincidentally, Assistant Minister of Christ Church).  The other Shipman children, two sons and two daughters, had already married.

In 1901 the aging Rev. Jacob S. Shipman was “stricken with paralysis,” according to The New York Times; most likely the result of a serious stroke.  On January 15 the newspaper noted that he “has since been unable to attend to his pastoral duties.”  Shipman’s title was changed to “rector emeritus” and he and his family continued to live on in the house behind the church while services were handled by various ministers.  Herbert had moved on by now, taking the position of Chaplain at the United States Military Academy at West Point.

On May 27, 1902 Anne Louise Shipman visited her daughter, Mrs. William H. Burr, at her home nearby at No. 151 West 74th Street.  While there she suddenly suffered what doctors diagnosed as “neuralgia of the heart.”  Today it would be deemed a massive heart attack.  She died almost immediately.

Laura’s wedding to Chicagoan Henry Mascarene Hubbard had already been planned for a month later.  No doubt after serious discussion among the family, the ceremony went on.  Herbert Shipman came down from West Point to perform the ceremony in their father’s church.  The New York Times announced “It will be extremely quiet, owing to the recent death of Mrs. Shipman, and only a few near relatives will be present.”

With Anne Louise dead and Louise moving to Chicago, the invalid Jacob Shipman could not continue even as titular head of Christ Church.  On Laura’s wedding day, Wednesday, June 25, 1902, the vestrymen elected the Rev. George Alexander Strong of Brockton, Massachusetts as the new rector.  Like the Shipmans, the Strong family enjoyed a privileged lifestyle.  The New York Times, in announcing the appointment, mentioned “He will spend the Summer at North Haven, where he has had a cottage for some years.”

The well-respected clergyman had studied at Adams Academy, Amherst College, the University of Leipzig, and the Episcopal Divinity School in Cambridge.  He had served as assistant pastor of old St. Paul’s in Boston, and rector of St Paul’s in Malden, Massachusetts, and of St. Paul’s in Brockton, Massachusetts.

Mrs. Strong threw herself into women’s issues upon arriving in New York.   She immediately became active in the Women’s Municipal League; and when the group declared “active war on Tammany” at a meeting on October 7, 1903, she offered the rectory to help.  A “depot” was established in the house for the dissemination of “literature of all kinds” for the politically-active women.

In the meantime, her husband seems to have been less political.  That same summer he was made a member of the New York Yacht Club.

Following the devastating San Francisco earthquake on April 18, 1906 and the accompanying fire, troops from New York City went west to assist in recovery efforts.   On Sunday May 13 the First Company, Signal Corps, of the New York National Guard filed into Christ Church for services.  Rev. Strong commended the men in his sermon, saying “the country should be proud of the American soldier for the work done at San Francisco.”

In 1908 Rev. George Strong experimented with a new concept: Christian Psychology.   Dr. S. Weir Mitchell had proposed curing nervous disorders by “the combining of the two greatest powers of modern times—real religion and genuine science—in order to bring them to bear on a person at one and the same time.”

The practice had already been embraced by Boston minister Rev. Dr. Elwood Worcester of Emmanuel Episcopal Church.  He said of the cure “The disorders we treat include neurasthenia, hysteria, psychasthenia, mild melancholia, fixed ideas, and phobias.

“An important part has been the treatment of alcoholism both in men and women.  We have found a method that goes far deeper than those the Church has hitherto employed…It gives people the peace of mind and strength required to fight life’s battles and resist temptations.”

Strong was understandably cautious.  The Times explained “The experiment at Christ Church does not mean…that this Episcopal parish has committed itself to the new idea, much less that it is to be made permanently at home there.”   Rev. Strong gave the experiment one week—the third week in Lent.

Since nothing was again heard of Christian Psychology at Christ Church, one might assume that the experiment failed; or that the church was low in alcoholics or depressed parishioners.

The 71st Street rectory bustled with preparations for the wedding of the Strongs’ daughter, Susan Sturgis Strong, in the spring of 1913.  On the afternoon of Wednesday May 14 Susan gave a luncheon in the house for her bridal attendants.  The next afternoon, following her wedding to George Lindsley Burr, it was the scene of the reception.

After serving Christ Church for 11 years, Rev. George Alexander Strong submitted his resignation in June 1913.  The Church attributed his resignation to ill health.  “He has gone with his family to North Haven, Me.” said the announcement.  Like Rev. Jacob Shipman, Strong remained in the 71st Street rectory, at least through 1915.

Nearly two decades earlier, in 1897, St. Stephen’s Episcopal Church had followed the lead of Christ Church and moved uptown from 46th Street.  The trustees of Christ Church were defiantly opposed to the sale of property to St. Stephen’s just two blocks away from their own structure.  The New York Times had explained “It is contended that there is not room in that district for two churches of the same type of churchmanship.”

The bickering between the two parishes had grown so strained that in 1905 Christ Church sued St. Stephen’s for infringing on parish boundaries.  The suit was dismissed and the two churches continued in their tense coexistence.

Now, the competition over parishioners and the economic troubles caused by the Great Depression were most likely responsible for Christ Church's selling its costly rectory in 1935.  The once-grand home was illegally leased as furnished rooms and in 1936 received a “multiple dwelling violation.”

In 1947 the house was converted to a private school with the three top stories used as dormitory bedrooms.  Six years later the school was gone and the house was operated as “furnished rooms” again.  And in 1984 it received its final renovation into apartments. 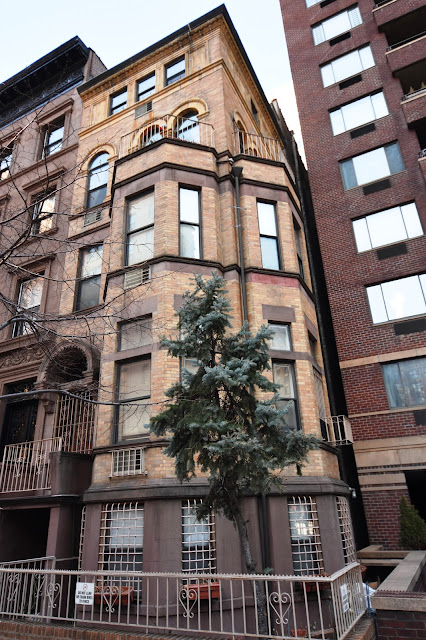 Sadly, the former rectory has lost its stoop, the doorway converted to a French door leading nowhere and the entrance moved to the basement level.  The ornamentation of the brownstone lintels has been shaved flat and the original railings of the third floor balconies have been replaced with industrial-type fencing.  But despite the regrettable abuse, the old house still stands out among its peers; hinting at the refined lifestyles of its earliest residents.