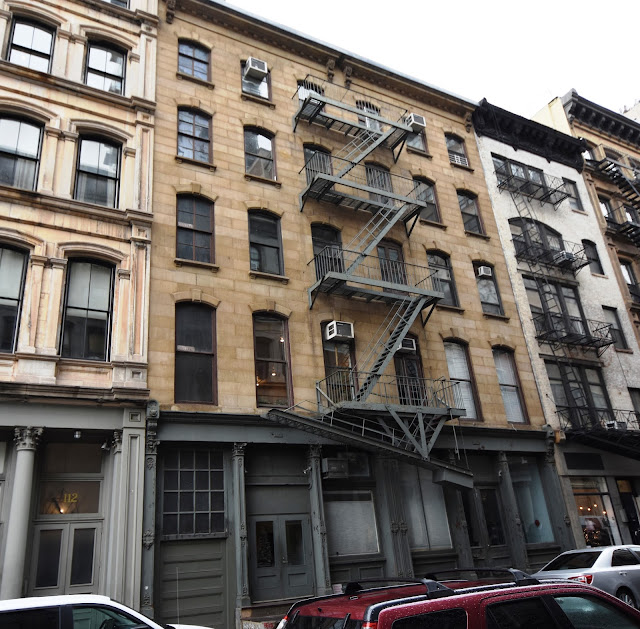 Franklin Street between West Broadway and Church Street was a quiet residential block lined with Federal style brick homes throughout most of the first half of the 19th century.  But by 1860 most residents had moved away as their homes were razed or remodeled for commercial purposes.

In 1861 two seemingly unlikely partners joined forces to replace two properties with a modern loft and store.  Ann Richardson listed her profession as “seamstress;” however her apparent financial status suggests that she was most likely a dressmaker.  William Bowne was a businessman whose well-respected family had been in America since the 17th century.

The two old structures at Nos. 108 and 110 Franklin Street were demolished and the replacement buildings—designed by an unknown architect to appear as one—were completed in 1862.  The matching shop fronts at street level were executed in cast iron—the material quickly gaining favor for its versatility and fire-proof qualities.  Thin piers with Corinthian capitals were moderately decorated, including attractive address plates.

The four floors above were clad in sandstone.  Italianate elements included protruding sills sitting on stone brackets, handsome arched lintels with prominent keystones, and a stone cornice with foliate brackets.

By 1868 the combined buildings were occupied by the wholesale dry goods operation of James Talcott.  A commission merchant, he sometimes offered what today would be called “overstock” or “close-out” merchandise.  On November 17, 1873, for instance, he offered “by order of several leading manufacturers” 750 cases of “knit shirts and drawers,” 100 cases of ladies’ vests, 100 cases of cardigan jackets, 100 cases of double brown jackets, and 500 cases of hosiery.  His sale prices were offered “to close the product of the mills.”

Like William Bowne, Talcott’s family had been in America since the 17th century; the original John Talcott arriving in Massachusetts in 1632.   Talcott started his business in 1854 at the age of 19 with one account.   By the time he moved into the Franklin Street building he had established himself as one of the leading merchants of the city and had garnered a large personal fortune.

Despite his wealth (or perhaps because of it), Talcott was intensely concerned about the conditions of the poor.  In 1879 he announced his concept of a “stock company for the erection of tenement-houses on an improved plan.”  His idea was to induce ten or more millionaires to invest in improved tenements with better ventilation and lighting, playgrounds and courtyards. 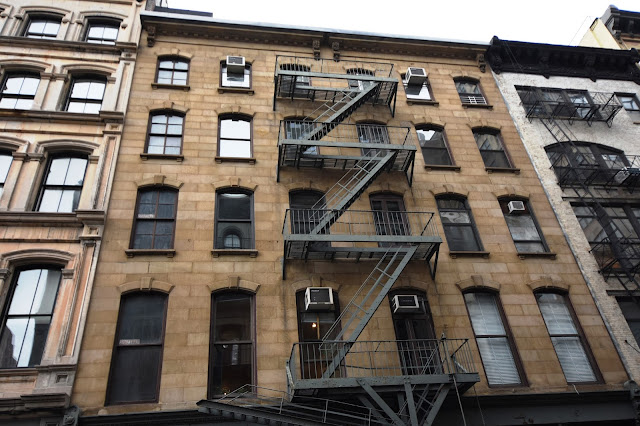 A committee was formed in Talcott's Franklin Street office which told reporters “Our ideas may, perhaps, be a little in advance of the times in which we live, but we have at our back, encouraging us, a strong army in the large mass of tenement occupants who only want a way opened to enable them to quit their wretched quarters.”

James Talcott’s broad range of interests included the business community and social reforms movement.  He was President of the National Knit Goods Association in 1882 and that year held a large meeting of knit goods manufacturers in his office “to urge upon Congress the necessity of correcting what is claimed to be an error” in the tariff laws.

In 1885, when the Young Women’s Christian Association, desperately needed larger accommodations, James Talcott was named Treasurer of its building fund; and two years later he served in the same position for the construction of evangelist Dwight L. Moody’s schools in Massachusetts.

In addition to his dry goods commission house, Talcott’s business interests included directorships in three banks and he was a member of the Chamber of Commerce.  His success did not distance him from his employees.  In 1889 William H. Allen, Jr. had been in charge of the woolen department of Talcott’s store for several years.  The 40-year old died suddenly of diphtheria on Monday evening, December 23.  The following day Talcott closed his operation “out of respect to the memory” of his employee.

The scandal-free reputation of John Talcott’s business was tarnished in 1895 by 31-year old salesman John A. Brown.  Four years earlier Brown had married 20-year old Bertha Liebert “despite the opposition of her family,” according to The New York Times. The newspaper said “Mrs. Brown’s father is a retired iron manufacturer, and wealthy, and Brown was never in a position to support the girl he made his wife in the manner in which she was accustomed to live.”

On their wedding day Brown’s physical abuse of Bertha started and “he went from bad to worse, abused his wife frequently, took to drinking, and made little effort to support her.”  Bertha left Brown several times, but always returned.  The birth of their child in 1893 “formed a bond of union between them,” said The Times.

Finally, early in 1895, Bertha took the toddler and left Brown for good.   She went to Philadelphia to live in her father’s home.  On March 29 Brown showed up at the Liebert house.  His father-in-law refused to see him and Bertha was out; but when he asked to see his baby, he was allowed in.

Unaware that her husband was in the reception room, Bertha returned home.  Although her father warned her against it, she went in.   She told Brown “that she would never return to him unless he ceased drinking and could make a living for her and her child.  Upon this Brown took a revolver from his pocket.”

Bertha dodged, a movement that probably saved her life.  Nevertheless, the bullet struck her in the back of the neck and exited through her throat.  As he fired again, Bertha “in a frenzy of terror and desperation, threw herself upon him and bore him to the floor.  She wrested the revolver from his hand, and springing up ran from the room.”

While their two-year old child watched, Brown caught up with her in the hall, grabbing her by the hair and pulling her backward.  He snatched the handgun just as Bertha’s sister and a female guest came down the stairs.

Brown’s attention suddenly turned on the toddler.  “Miss Liebert fled through the front door, but as Miss Stockton saw Brown turn his pistol toward his child, who was standing in the hallway, she seized the little one and rushed into the dining room.”  The distraction gave Bertha the opportunity to escape.  She ran through the hall and out the side door.  Brown fired a shot at her but missed.

The Times reported “When his wife disappeared through the door Brown turned the revolver upon himself and sent three bullets through his head.”

There were other dry goods merchants in the building by the last years of the century.  In 1895 Austin C. Trowbridge operated here, and in 1897 woolen importer Willard Braman had space in the building.

On October 31, 1896 New York City turned out to see its prominent businessmen march in The Great Sound Money Parade.  A booklet commemorating the event said “In the heat of presidential contests, popular demonstrations in behalf of opposing candidates are often imposing in numbers and enthusiasm…None of the equaled, rivaled or approached the Great Republican and Sound Money Parade in behalf of McKinley and Hobart, October 31, 1896.”

It noted “James Talcott, one of the substantial and veteran merchants of the dry goods district, marched in the Great Parade in the famous ‘old merchants’ division.’  Rank and authority were not thought of by the spectators who understood the magnitude of the interests represented by Mr. Talcott and his companions.”

At the turn of the century other firms in the building included dry goods merchants Snedecker & Orchard, and the American Hosiery Co., which cautioned buyers “Don’t buy Foreign Knit Underwear when there is none better in the world than ours.”

On April 3, 1904 The Times announced that “J. H. English & Co. is the name of a new commission house for the sale of cotton yarns.”  The article added “They will have their quarters at 108 Franklin Street and will be financed by James Talcott.”

After half a century in the building, James Talcott & Co. moved to Fourth Avenue in 1911.  The other tenants left too, as the Richardson estate leased the building to Wright & Graham Company, “a large linen company.”

Wright & Graham Company remained in the building through the 1920s.  Following the Depression the Superior Knitting Mills and the Industrial Waste Corporation made No. 108-110 Franklin Street their home.  Industrial Waste recycled fabric remnants to be used in the doll and artificial flower industries.

The dry goods district had abandoned the Franklin Street area by mid-century and in 1957 Custom Craft Die Cutting Corporation took a five year lease on a floor of Nos. 108-110.  By the end of the century The White Street Repacking Company occupied the ground floor. 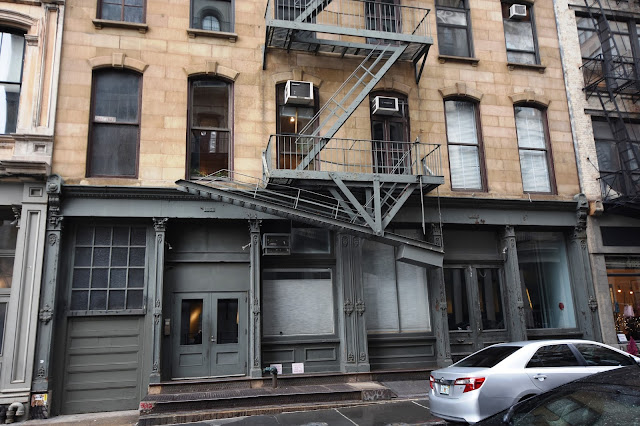 Although somewhat abused, the cast iron storefronts are essentially intact after a century and a half.  Even the wonderful address plaques survive.  And other than replacement windows and an industrial fire escape, the upper floors are unchanged since the first tenants moved in during the first year of the Civil War.