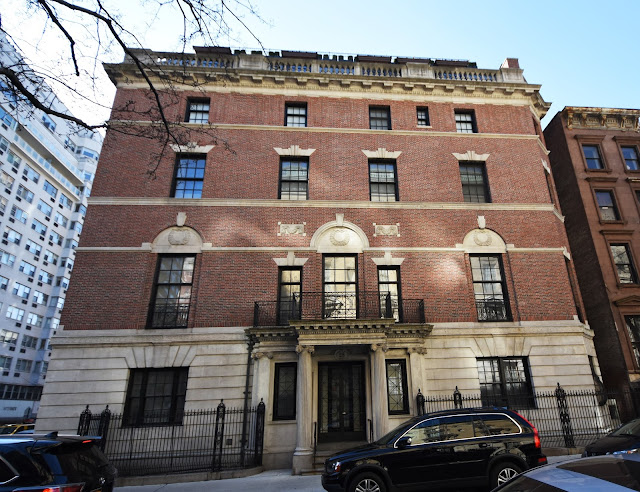 The 78th Street block between Fifth and Madison Avenues had greatly changed as the 19th century drew to a close.  At the southeast corner of Madison and 78th Street the row of four-story brownstones, erected three decades earlier, were being eclipsed by elegant limestone and marble mansions that spilled east from Central Park.

Although the vintage rowhouses were comparatively modest—a mere 16-feet wide—the increased property values of the block became evident when “Mr. Barnum” sold No. 28 East 78th Street in 1897 for $35,000.  The price tag would equate to just under $1 million in 2016.

Millionaire Philip Ashton Rollins accumulated several of the old brownstones and begin plans for a lavish mansion.  In 1901 he commissioned architects McKim, Mead & White to design his new palace.  The firm put William Mitchell Kendall in charge of the project.  He produced a dignified neo-Georgian mansion of red brick and limestone which sat on a rusticated stone base.

The Colonial Revival movement had taken root within the last decade, resulting not only in reproduction furniture but residential architecture that mimicked America’s earliest structures.  The trend resulted in other Manhattan homes like the massive Andrew Carnegie mansion and the Willard D. Straight house.

The Rollins house was completed in 1902.  Five stories tall, it was described by critic Herbert Croly as “a building with an air of great elegance and distinction.”  A handsome columned portico sheltered the entrance and provided a roomy balcony at the second floor, where the socially-important drawing room was situated.

Writing in the Architectural Record, Croly explained “The importance of the second floor…is brought out by the arched openings, connected at their springing by a band of cut stone and adorned in the recess of the arch by elaborate festoons.”  He pointed out that the private, and therefore less “important,” floors above had increasingly shorter openings.    Finally the fifth floor was hidden from view by an elegant stone balustrade.

Croly mentioned the top floor in socially-supercilious terms.  “There is a fifth story; but like all the other fifth stories, it simply does not figure in the design at all, even less than the servants who doubtless very largely occupy it, figure in the lives of the inhabitants of the house, except as a convenience.”

Philip Ashton Rollins’s background was nearly unique among Manhattan millionaires.  When he was just five years old his father, a railroad tycoon, moved the family from New Hampshire to Wyoming.  Despite his privileged circumstances, he grew up among cowboys and cattle.  His intimate familiarity with Western life would define his legacy.

Rollins attended Princeton, Columbia and New York Universities and was admitted to the bar in 1895, the same year he married Beulah Brewster Pack.  Although he sold off the cattle ranches he had inherited from his father; he continued to collect Western lore.  He later explained that the depiction of the West that Americans received through motion pictures disturbed and annoyed him.

“I wanted to show that the West was not as wild as it was painted,” he told a reporter.  “Princeton is a great deal wilder.  In many ways the West was as conventional as the Knickerbocker Club.  I’d walk into any cow camp sooner than I’d cross the Princeton campus the night the juniors take over the steps.”

Philip and Beulah Rollins, would live in the 78th Street mansion for decades.  While Rollins amassed an enormous library of Western Americana (it would eventually total over 3,000 volumes); Beulah filled the role of Manhattan socialite.  The house was, as expected, the scene of luncheons, receptions, teas and dinner parties.

In 1922 Rollins's role of collector of Western literature progressed to author.  He published The Cowboy, His Characteristics, His Equipment and his Part in the Development of the West that year.  It was an authoritative effort to give American readers a true-life depiction of Western life.   He issued an updated edition in 1936 explaining in the preface “In this new edition the text has been much enlarged as concerns branding, roping, trail-driving, riding of bucking horses, social customs, technical terms and old-time slang.”

His passion for the subject resulted in the 1927 Jinglebob: A True Story of a Real Cowboy, the 1939 book Gone Haywire; Two Tenderfoots on the Montana Cattle Range in 1886, and magazine articles and pamphlets.

After more than four decades in the mansion, in 1945 the aging couple left Manhattan.  Rollins was now 76-years old.  He and Beulah moved permanently to their Princeton, New Jersey estate.  His massive compilation of Western books was given to Princeton University Library.

The 78th Street mansion was purchased by the Automobile Club of New York.   All five floors were converted for office use.  The new clubhouse was officially opened on October 31, 1946 with the ribbon-cutting done by Governor Thomas E. Dewey.

Dewey took the opportunity to announce his intentions to improve roadways.  Decades before the first interstate highway systems were initiated, he warned that most of the New York thoroughfares were built for “the model T Ford era” and declared that “extensive road construction is vitally needed to meet modern travel requirements.”

To emphasize the Governor’s point, Automobile Club President William J. Gottlieb pointed to the increase of drivers since the end of the war.  In October 1945 there were 41,300 members in the Automobile Club of New York.  A year later membership had increased to 92,500.

The Automobile Club of New York pressed for highway safety and improved laws.  It was the resource for American motorists for maps and travel information (like hotels and vacation spots).   The Club sponsored an annual National Safety Poster contest for school children.

Not all the efforts of the Automobile Club were appreciated by everyone.  Down the block from the headquarters was Doris Duke’s sumptuous mansion at No. 1 East 78th Street.  The heiress preferred that the curb in front of her home was not sullied with automobiles not owned by her.  So she had No Parking signs erected.

Not only did motorists assume that the signs were officially posted; apparently so did at least one traffic cop.  When he noticed a car parked in front of the Duke mansion he issued a summons.  “This led to the investigation by [The Automobile Club of New York] which wrote to the Traffic Department for a definition of the right of way,” reported The New York Times.

The Club’s prompting resulted in a ruling by Traffic Department to have Doris Duke’s signs removed.  The headstrong and fabulously wealthy woman was, no doubt, not pleased with her neighbors at the opposite end of the block.

It was, however, the Automobile Club which was the target of an investigation two decades later.  Consumer advocate Ralph Nader discovered that the organizations five top officers, its general consul and two retired directors were principals in a private automobile insurance agency which they portrayed to members as being a part of the club.

The American Automobile Association moved out of the former Rollins mansion in 1990.  The building received a $1 million renovation that resulted in a combination art gallery and museum, headed by art dealer Chozo Yoshii, Milwaukee gallery owner Michael Lord, and French curator Jacques Demons.  The New York Times said on May 12, 1991 they had teamed up “to lease the building and turn it from a temple of automobile to a palace of art.  They have named their effort Elysium Arts.”

The gallery opened in May 1991 with an exhibition of Monet paintings.   Although the valuable canvases were not listed for sale; Michael Lord told The Times “that offers will be considered.”

The building remained an art gallery through 1998, when it was purchased by Arthur Carter, owner of the New York Observer for $7.6 million.  He resold it in 2006 for $34 million, making an unarguably tidy profit.  Although the mansion still contains offices throughout; it remains externally unchanged since the days when Philip Rollins filled its library with rare books on Western life and Beulah served tea to Mrs. Hamilton R. Fairfax of the Colonial Dames.