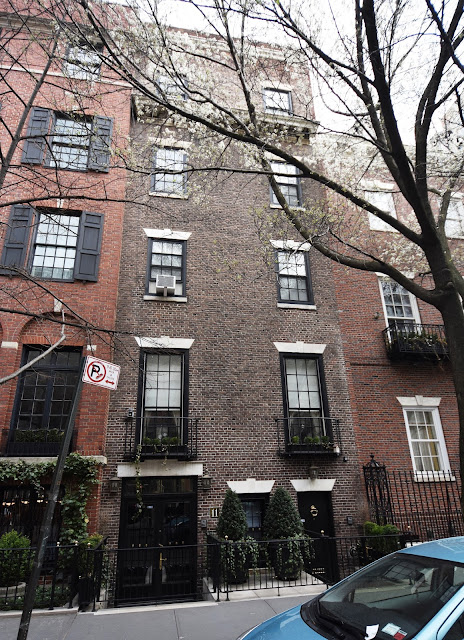 In 1879 Richard Arnold and his sister, Henrietta Constable, laid plans to demolish the old Constable and Arnold family homes on West 23rd Street.  Richard was a partner in the highly successful Arnold, Constable & Co. dry goods firm.  Henrietta had married his partner, James Constable.  And while they hired William Schickel to design the modern commercial building for that site; they turned to architect Griffith Thomas for a speculative residential project uptown at the same time.


They gave Thomas the job of designing a row of ten brownstone rowhouses on the north side of East 81st Street, between Fifth and Madison Avenues.   Construction started in 1878 and was competed the following year.  Richard and Henrietta retained possession of No. 11 until 1890, when they sold it to Henry Batjer.

Born in Bremen, Germany, Batjer was the senior member of Batjer & Co. of No. 45 Broadway.  He and his wife, Harriet also maintained a summer residence, Howcroft Farm, in Maywood, New Jersey.   The family included two daughters and a son.

Young Henry Jr. was a member of the prestigious 7th Regiment, nicknamed the “Silk Stocking Regiment” because of its socially-elite members.  Another 7th Regiment member was Henry’s brother-in-law, Albert Edward Pond who had married Josephine Batjer.  The couple lived with the Batjer family in the commodious brownstone.


As the year 1894 came to a close, Henry, Jr., became ill.  His condition worsened and on Friday, January 4, 1895 he died in the house at the age of 28.  Captain Charles E. Lydecker requested the members of his company to attend the funeral in the 84th Street house at 4:00 the following Sunday.  “The usual badge of mourning will be worn thirty days,” instructed the Captain.


The mansion was the scene of a more joyful event three years later.  Following the wedding of daughter Virginia to Luther Connah Brown in St. James Protestant Episcopal Church on Madison Avenue, the reception was held in the house.


The parlor of No. 11 East 81st Street was the scene of a funeral again, on Sunday, January 19, 1902.  Albert Pond had died of pneumonia in the house three days earlier.


Lydecker’s first wife, Ella Voorhis, had died in 1889.  A graduate of the Columbia Law School, he was a member of the firm Redfield & Lydecker and the city’s Public Administrator.  A year before his wedding to Josephine he was made president of the National Guard Association.  The new family, including Charles’ three children and Josephine’s son, moved in with Henry Batjer, now widowed, at No. 11 East 84th Street.


The family received a scare when young Kenneth Lydecker, an engineer, was traveling on the Pennsylvania Limited on Thursday, February 15, 1912.  The train wrecked near Altoona, overturning cars and injuring 67 and fatally wounding three.  Seconds before the wreck, as Lydecker realized that “things were going wrong,” in his words, he reached up to pull the emergency cord.  At that instant the car turned over.


“I fell heavily against the roof of the car and my elbow broke a hole in a ventilator,” he recalled.  “The porter was thrown into the window and badly hurt.  After the car had turned over a couple more times on its slide down the thirty-foot bank I worked my way out and helped pull out the porter.  There were sixteen persons in my car, which was second from the front.”


Lydecker suffered only a badly bruised elbow and a hurt ankle.


In 1914, as war broke out in Europe, Charles Lydecker warned of the need to prepare for war.  He helped organize the National Security League that year and was its President for two years.  Then, in 1916, he was forced to step down because of ill health.

The Lydecker family remained in the house on East 84th Street and continued to use Howcroft Farm as their summer residence.   One by one the children married and left the home.  In 1918 Warren B. Pond, Josephine’s son who was attending an Army Aviation School, became engaged to Marion Chapman.  But the wedding never came to be.


In the meantime Charles’s health continued to decline.  Finally, on the morning of May 6, 1920, he died in his bedroom.  The many obituaries paid little attention to his legal career and focused on the military man.  “During the late war his true-blue Americanism asserted itself in detection and denunciation of all forms of disloyalty,” said the Year Book of the Holland Society of New-York.  “While past the age for active service abroad his life-long connection with the Militia of the State of New York enabled him to serve his country efficiently at home.”

The New York Times recalled “After the European war started in 1914, Mr. Lydecker was one of the earliest and most vigorous advocates of preparedness.”


Lydecker’s will left Josephine one-third of the estate.  She already owned outright the houses on 81st Street and in New Jersey.  His daughter Nathalie L. Dyer received another third; and the final share, which was made up of Lydecker’s swords, medals and awards, was to be divided equally between his sons Leigh and Kenneth.   Josephine’s son, Warren, received nothing “because he is already well provided for in other ways,” said the will.


Love finally came to Warren and he was married to Helen R. Schniewind in the Fifth Avenue Presbyterian Church on October 6, 1921.  It was a high-profile society wedding with names like Payne, Gardiner and Mellon in the wedding party (attendant Ailsa Mellon was the daughter of Andrew Mellon, Secretary of the Treasury).


The house, now architecturally out of style, was sold in October of 1924 to Stanleigh P. Friedman and his wife the former Rena Frowefeld.  Before moving the family in, they hired architect Julius F. Gayler to give the façade a facelift.


Three years earlier Gayler had designed the double-wide neo-Federal mansion next door for Granville Lindall Winthrop.  The chaste architectural style had been in favor for about two decades.  He turned to it again for the Friedman house, stripping off the old brownstone front and stoop and creating a pleasing partner to its neighbor.


Instead of the more expected red brick, Gayler used brown, laid in English bond and trimmed in white marble.  Seeking harmony, he nearly duplicated both the splayed keystones and the cornice of the Winthrop house.  The main doorway, once a flight above the sidewalk, was moved to the former English basement level, a few steps below the street.


With Stanleigh and Rena in the house were their two children, Edward and Dorothy.  Friedman was a man of many talents.  Having graduated from Yale in 1905 and from the Harvard Law School in 1908, he became a partner in the law firm of Friedman & Bareford I 1912.  Active in the Association of the Bar, he served as chairman of its Committee on Courts of Limited Jurisdiction from 1921 to 1936.

And he wrote music.


In 1904 while a undergraduate at Yale University he wrote its well-known fight song “Down the Field.”  For that the school honored him with an inscription carved on the walls of Welch Hall.  He also wrote “Glory for Yale," “Whoop it Up,” and other school songs for the college.


Friedman’s talents went beyond college songs.  He wrote a cantata, “All Ye That Cleave Unto the Lord” and an anthem, “God is My Trust.”  His arrangements of Bach’s “Bist Du Bei Mir” and “Gavotte en Rondeau” were performed by the New York Philharmonic Orchestra.


Highly cultured, when the attorney was not busy with legal matters, he was President of the Schola Cantorum of New York, a Director of Ballet Associates in American, a member of the American Society of Composers, Authors and Publishers and a member of the Yale Club.


As if all of this were not enough, in 1931 he became a vice-president and director of Warner Brothers Pictures.  Friedman functioned as the motion picture company’s attorney.


The year 1940 was a momentous one in the Friedman house.  On April 18 daughter Mary’s wedding to Sylvan Schwartzreich was held in the house; and two months later her sister Dorothy’s engagement to Martin A. Roeder was announced.  Dorothy had graduated from the exclusive Lenox School and Finch Junior College while her fiancé was an alumnus of Columbia, Columbia Law School and had attended the Sorbonne. 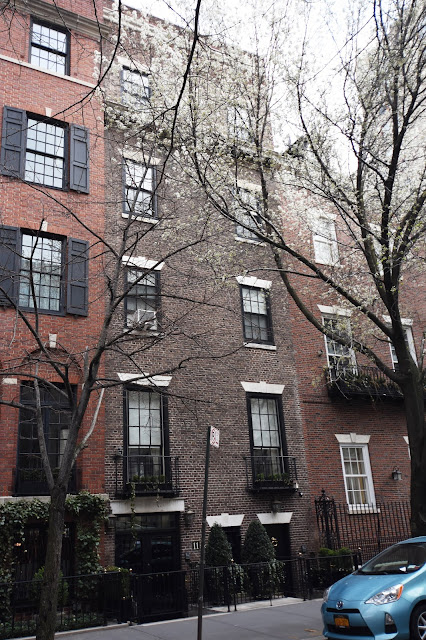 Two years later the low parapet above the cornice was removed and a story added.  While the architect admirably matched the brick and copied the lintel treatments; the addition upset Julius Gayler’s handsome proportions.  The house remains a single-family residence after nearly 140 years.

photographs by the author
many thanks to reader Phyllis Winchester for catching an earlier discrepancy
Posted by Tom Miller at 3:25 AM