In the 1840s James L. Waugh and his family lived in their comfortable 25-foot wide wooden house at No. 112 Franklin Street.  Within a decade the neighborhood was changing, as businesses moved into many of the Federal-style houses.  In 1854 Waugh was operating his “gold leaf and gold foil” business from his residence, while living upstairs.

Things changed for Waugh when the country was thrown into conflict.  A captain in the New York National Guard, he marched off when the Civil War erupted in April 1861.  The New York Times remarked “he will doubtless prove that he is quite able to win, in war, the laurels he has so long worn in peace.”

Waugh commanded Company H, better known as the “Tompkins Blues.”  In the spring of 1862 his son was seriously ill and, after “having with great difficulty obtained a brief furlough,” Capt. Waugh returned to Franklin Street to see him.  He placed a notice in newspapers that he would gladly take letters and small parcels back to his soldiers if their families would drop them off at his Franklin Street house.

The Civil War ended in May 1865 and soldiers returned to New York, replenishing the workforce.  Construction in the city, which had significantly slowed, ramped up as life slowly returned to normalcy.  The burst of construction projects included the demolition of James L. Waugh’s former home. 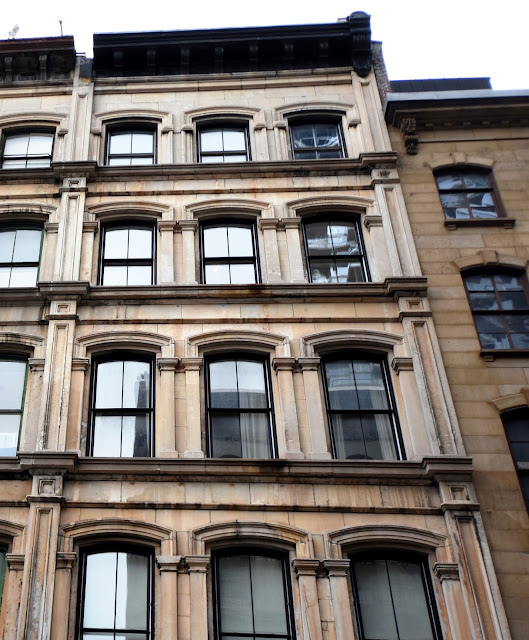 On May 17, 1867 The New York Times remarked on the dramatic changes in the neighborhood.  “Although but few of those who have passed through the streets at right angles to, and parallel to, Broadway below Canal-street, can have failed to express astonishment at the extraordinary transformation going on in that locality, yet the number who have had any clear idea of the vast sums of money which are being expended there, have not been many.  This change has been going on since early in 1865.”  Included in the article’s dizzying list of new and under-construction buildings was Weil’s No. 112 Franklin Street, with construction costs at $40,000—in the neighborhood of $662,000 in 2016.

Interestingly, when Elliot C. Cowdin embarked on a similar project a year later, he hired Warner’s architect brother (Benjamin and Samuel shared an office) to design his building.  The result was a carbon-copy.  The two identical marble structures appear, obviously, as a single building.

No. 112 filled with dry goods and apparel merchants and manufacturers.  Among the first was Louis Weddigen & Company, importers and commission merchants.  The store became home to Campbell & Elliott, dealers in woolen goods.  By the early 1870s the second floor was leased to L. Solomon & Co., manufacturers of boys’ clothing; and the third and fifth stories were occupied by Gottfried August.

On the afternoon of Sunday, March 24, 1872 fire broke out in L. Solomon & Company’s factory.  With the building vacant the blaze spread upward.  By the time fire fighters extinguished the fire, L. Solomon & Company had suffered $5,000 in losses; and Gottfried August lost $1,000 in cloth.  The ground floor shop suffered water damage of about $500.

Max Weill paid about $1,000 to repair the fire damage and things returned to normal at No. 112 Franklin Street.  The building was burglarized in 1875 by the career criminal John Richard Dolan.  The crook’s final arrest took place following the highly-publicized murder of wealthy brush manufacturer James H. Noe.  On the morning of Sunday, August 22, 1875 Noe surprised Dolan burglarizing his factory.  A violent scuffle ended in Noe’s death.

Prior to Dolan’s execution on April 21, 1876 The Times remarked “When he was arrested by Detective Dorsey he had in his possession part of the proceeds of a burglary at No. 112 Franklin street, committed a few days before, and on the night of his arrest a valise which had been stolen from No. 112 Franklin street was found in a hallway, near Dolan’s house.”

One concern not involved in the dry goods trade was F. H. Leggett, a wholesale grocery firm.  The company leased space in the building in the 1890s.  One Monday, April 1, 1895 an executive decided not to go directly to his home in Demorest, New Jersey after work.  Instead he started drinking.

Chris Johnson struck up a conversation with two women, 25-year old Josie Cole and 21-year old Annie Edwards in a saloon on the corner of 26th Street and Seventh Avenue.  The three drank until about 2:00 in the morning, and then left the bar together.  And then Chris Johnson learned what many Victorians already knew: unescorted women who frequented saloons and drank with strangers were rarely to be trusted.

On the street corner the women doubled up on Johnson, robbing him of $200 in cash and a $200 check (a significant $11,600 in 2016 dollars).  While Johnson looked for a policeman, a witness followed the women.  The Evening World reported “Josiah Julius, a colored man…saw the row on the street when the robbery occurred, and followed the women to various saloons.”

The self-appointed private detective tailed them to Eli Pierce’s Dance Hall on 26th Street.  A man there, William McPherson, argued with Josie when she “refused to divide the spoils.”  Eventually, Johnson, Patrolman McDonald, and Josiah Julius crossed paths.  Julius told the policeman where Annie Edwards and Josie Cole were drinking.  At around 3:10 they were arrested.

Both women were held at $2000 bail.  The commendable actions of Josiah Julius garnered questionable rewards.  The Evening World reported “Julius, the colored man, was sent to the House of Detention as a witness.”

Thirty-four years after its construction, the estate of Max Weil sold No. 112 Franklin Street in November 1901 to William S. Boardman.  On August 6 two years later he transferred titles to both No. 112 and No. 114 to Blanche B. Hammill.  “The properties are a gift to her,” reported the New-York Tribune.  The generous gift became more understandable when Blanche’s surname later changed from Hammill to Boardman.

By 1921 Ross Brothers, linen dealers, had been in the building for several years.  The cotton converting firm of Baum, Strauss & Co. moved out in January that year and, later, Blanche Boardman put the building on the market.  Ross Brothers purchased it for $44,000.

While the Irish-based Ross Brothers were apparently doing very well, two other tenants were not.  Moe Hyman and Louis Corn, who owned the Alert Shirt Company went bankrupt that year; and in 1922 Henry Sachs & Bro. Inc., another shirt maker, declared bankruptcy.

Ross Brothers remained at No. 112 Franklin Street until 1957 when it sold the building to Kniffen Demarest Company.  The hotel supplies company had been at No. 48 Murray Street for half a century.

The last quarter of the 20th century saw the Tribeca neighborhood rediscovered by artists and celebrities.  In 1977 the Franklin Street Arts Center, a performance arts space, opened in the basement and a year later Franklin Furnace took over the first floor.

Founded by performance artist Martha Wilson, Franklin Furnace housed the nation’s largest collection of artist-produced publications.  Grace Glueck, writing in The New York Times on March 31, 1978 said “a must stop is the Franklin Furnace, a storefront space at 112 Franklin Street that serves as a museum, archive and exhibition gallery for the large number of ‘book works’ now made by artists.  In its archives the Furnace has between 2,000 and 3,000 of them…The Furnace also presents performances and readings and is altogether a joy to its drab neighborhood.” 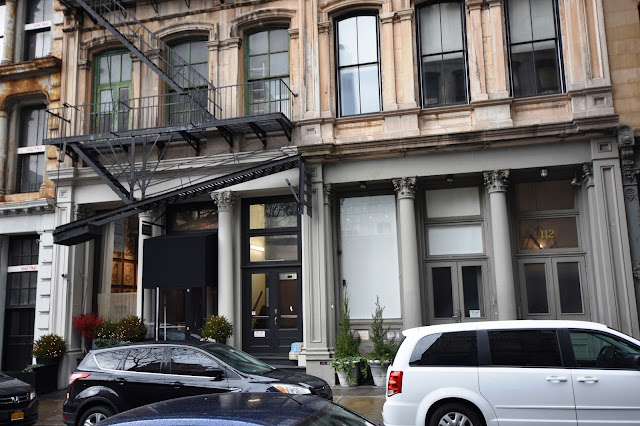 Performances at Franklin Furnace were sometimes controversial and in May 1990 it was closed down when the New York City Fire Department received an anonymous complaint about an “illegal social club.”  It continued in the Judson Memorial Church, the New School and the Cooper Union as Franklin Furnace in Exile.

In 2003 a renovation was completed that resulted in five residences—one per floor—in the building.  Bare brick walls, pine floors and pressed tin ceilings were preserved as the former factories were transformed into high end condo-coops.  Although the once-white marble is stained to dingy beige after a century and a half of weather and pollution; the building is remarkably preserved.  Even the 19th century double doors in the cast iron storefront survive.

non-credited photographs by the author
Posted by Tom Miller at 2:13 AM