When 21-year old Harley T. Procter entered his father’s soap-making firm, Procter & Gamble, in 1868 he had big ideas.  William Procter and James Gamble had founded the Cincinnati firm in 1837.  In 1863 Gamble’s son, James Norris Gamble, developed an inexpensive bar soap little different from scores of soaps on the market—except his floated.  Some attribute this to his unintentionally whipping the ingredients too long, infusing the bars with extra air bubbles.

As it turned out, women liked the floating soap which was easier to find in the dirty, soapy water.  Nevertheless, when Harley Procter came on as sales manager, the company was still a small, local operation with just three salesmen.  He instituted gutsy advertising techniques that would make Procter & Gamble a national name.

And then on a Sunday in 1879, he listened to the passage from Psalms 45:8, “All their garments smell of myrrh, and aloes, and cassia, out of the ivory palaces whereby they have made thee glad.”  The term “ivory” struck Procter as implying refinement.  He renamed the bar “Ivory Soap,” personally designed the paper wrapper, and patented the notched bar. 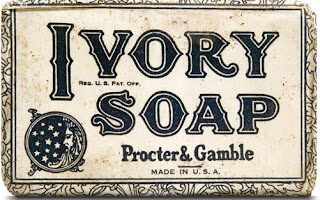 Harley T. Procter’s advertising brilliance garnered him a huge personal fortune.  Like other Ohio millionaires—the Rockefellers and Flaglers, for instance—Procter and his family spent more and more time on the East Coast where high society thrived.  They spent their summers in leased estates in Lenox and Newport, and in 1896 purchased a five-story mansion at No. 21 East 80th Street.

In October 1899 the full block of property from Fifth to Madison Avenue, between 51st and 52nd Street, became available as the Catholic Orphan Asylum prepared to move to Fordham Heights.  Wealthy property owners, most notably the various Vanderbilts, briefly panicked in fear of commercial buildings or hotels invading the mansions district.  But developers who managed to acquire plots were quickly bought out.  Instead limestone and marble mansions soon began rising.

Although Harley T. Procter, who still listed his permanent address in Cincinnati, had a home in a very fashionable neighborhood off Central Park, he joined the mansion-building frenzy thirty blocks to the south.    On September 23, 1900 The New York Times reported that he had purchased property at the southeast corner of Fifth Avenue, “including five lots on the avenue and two on the street.”  The article added “The plot is now being excavated preparatory to the erection of a new house by Mr. Procter.”

The millionaire soap maker apparently was not done with his building plans.  Almost simultaneously he bought the two brownstone houses on the opposite side of 52nd Street, facing the Asylum block.  He set architect Donn Barber to work designing a double-wide mansion on that site, plans for which were filed in January 1901.

Even while Procter was busy with his sudden burst of real estate and construction projects, his humanitarian side appeared as well.   He read in the newspapers of a 28-year old Seventh Regiment sergeant killed by a violent gang of strikers at the Croton Dam on April 16, 1900.  He immediately wrote a letter to the editor of The New York Times which read in part, “The noble ending of the life of Sergt. Robert Douglass in defending the liberty of others in their right to work has aroused my sympathy for the wife and two children who have been deprived of his care and support.”  Procter enclosed a check for $100; a generous gift equal to about $3,000 in 2016.

The double house at Nos. 15-17 East 52nd Street was completed in 1903 and the Procter family moved in.  The $100,000 Beaux Arts mansion competed with its Fifth Avenue neighbors.  Donn Barber had included all the frothy ornamentation of the Belle Epoque, including a high mansard with round windows and overblown dormers, multiple stone balconies with French-style iron railings, and a profusion of ornate carvings.  It bubbled over like a sudsy bar of Ivory Soap.

The Architectural Record was offended by the excess.  “The Fifty-second Street house is Manhattanese French of the most extreme and offensive type—the kind of French which by its exaggerations and its florid detail helps to bring into disrepute the whole French tendency in American design.”

Harley T. Procter might have been reading the architectural critiques.  That same year, on February 1, 1903, The Times reported that he had bought the brick carriage house next door, at No. 11 East 52nd Street.  He immediately commissioned the architectural firm of Trowbridge & Livingston to design a toned-down French Gothic mansion on that plot.

The Procter family was becoming permanently rooted in New York.  The year that they moved into the 52nd Street mansion, Harley Procter scouted property on Staten Island for a new, spacious Procter & Gamble soap plant.  And he continued to enjoy the life of an East Coast millionaire.  On August 15, 1903 American Gardening noted that he “has taken the famous garden estate of ‘Shadowbrook,’ at Lenox, recently occupied by A. P. Stokes, but which was closed down a short time ago.”

Now securely ensconced near Vanderbilt Row, Procter sold the 80th Street house in 1905.  In only a few years he would probably regret the decision.  Despite every effort, the mansion district in the 50s was doomed and already commercial buildings were inching their way up Fifth and Madison Avenues.

But in the meantime, lavish entertainments were held in the 52nd Street house, and the Procter and his wife, the former Mary E. Sanford, enjoyed the lifestyles of Manhattan millionaires.  When son William married Emily Pearson Bodstein on February 3, 1910, it was in fashionable Grace Church.  And as the Coaching Parade in Lenox neared later that summer, The New York Times reported “Harley T. Procter has been out this week with his famous bays on a coach, perfecting the horses for road work and trying out his various hitches for the coaching parade.”

On December 6, 1911 the Procters announced the engagement of their son Rodney to Beatrice M. Sterling.  Two months later The American Contractor reported that Procter had brought Donn Barber back to do $50,000 in renovations to No. 15-17 East 52nd Street.   But modernizing the house—less than a decade old—could not lure a buyer, nor stop the invasion of commerce.

In January 1912 Procter leased the house to “Thurn,” a society dressmaker who had been located on Fifth Avenue at 38th Street for two decades.  The 21-year lease, for a total of $500,000, reflected the high-end business and wealthy clientele.  It would translate to about $49,000 per month today.  The Times noted that Sidone Thurn would make “extensive renovations.”

Socialites gathered at Thurn on the afternoon of Wednesday, December 18, 1918 for a benefit “musicale and fashion fete” to aid L’Union Des Arts.   Thurn’s fashion show, which included “special importations from Paris,” was highlighted by music by Metropolitan Opera stars May Peterson and Robert Couzinou; and the Societe des Instruments Anciens.  The announcement made special note of “Jewels by Cartier.”

Early on the morning of May 15, 1920, Harley T. Procter died of diabetes at No. 11 East 52nd Street at the age of 73.  Of his $3.6 million estate, Mary received $1.5 million; sons William and Rodney, both of whom lived on Park Avenue, and married daughter Lillie who lived in Greenwich, Connecticut, each received about $650,000.  Despite the changing neighborhood, Mary continued to reside at No. 11 for several years.

In 1933, in the darkest days of the Great Depression, Thurn’s lease next door expired and the long-term tenant moved out.  The mansion, a relic of more elegant times, sat vacant for four years.  Then, on August 11, 1937 The Times reported that it had been sold by the Bowery Savings Bank “to an investor.”  The newspaper announced that it “will be replaced with a two-story building containing stores and showrooms.”

In 1938 the little building, designed by A. Goldhammer, was completed and became home to the high-end restaurant Henri.  The eatery was a well-known spot in Midtown until 1951 when the structure was razed.  It was replaced by an annex to Warren & Wetmore's 1926 now-named Omni Berkshire Place Hotel.