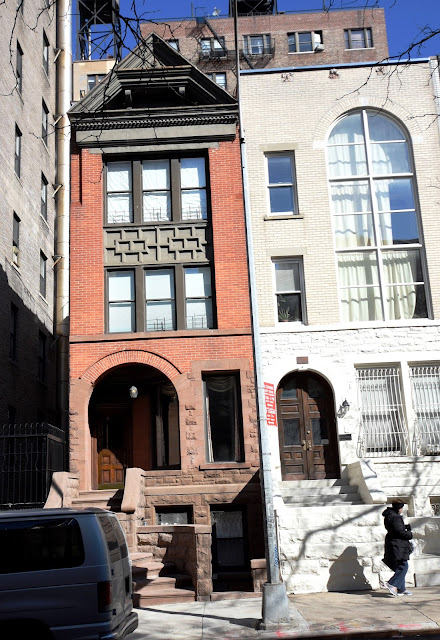 John C. Van Loon and George Truman Capron played dual roles in the development of the Upper West Side.  They were developers as well as contractors; a situation that saved them significant construction costs.  The only missing piece of the puzzle was the architect.

On August 7, 1886 The Real Estate Record & Builders’ Guide remarked on the rapidly developing Upper West Side.  “The building movement on the west side is going on steadily during the summer, and what might fairly be described as a new city, with features distinct from those in the older New York, is rapidly growing up in the region west of Central Park…In a great many quarters the work on half-finished buildings is pushed with energy; and, again, large gangs of men are excavating in solid rock, and the sound of the steam drill and the explosion of giant powder are heard on every side.”

The journal continued with a more than half-page of “elegant houses” that were either finished or under construction.  Included in the many projects, it noted that “Van Loon & Capron have thirteen three-story and basement dwellings on the north side of Seventy-first street, east of West End avenue, the walls of which are half way up.”

Three decades earlier, when the city saw a similar explosion in development, long rows of identical Greek Revival or Italianate rowhouses filled Manhattan blocks.  But the architects of the new Upper East Side mostly dismissed the concept of cookie-cutter architecture.  The rows of speculative homes were design as a whole--in the same overall style--yet each one kept its own identity.

Such was the case with Van Loon & Capron’s 71st Street row.  Designed by W. Holman Smith, they exemplified the personality of the Upper West Side.  The asymmetrical Queen Anne homes worked harmoniously together with balconies, arches, and a mixture of brick, stone, metal and terra cotta.  Fanciful dog-legged stoops led straight down from the entrances before sweeping dramatically to the left and curving down to the sidewalk. 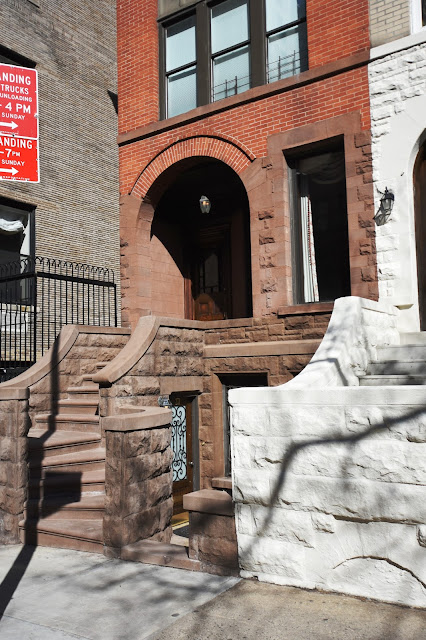 Like its neighbors, No. 271 was faced in red brick over a rusticated brownstone basement.  Its rough-cut stone blocks continued halfway into the parlor level, where they morphed into the tidy brick.  A maw-like arch engulfed the offset entrance and the angled parlor wall, providing a flood of sunlight inside.  A surprising geometric cast metal spandrel panel between the third and fourth floors smacked of the Arts & Crafts movement, just appearing in America.  Smith playfully projected a balcony through the otherwise formal triangular pediment of the attic floor.

Stanton was a member of the legal firm of Stanton & Hopkins at No. 31 Nassau Street.   His early New England pedigree and his significant wealth were reflected in his club memberships.  Not only was he a member of the very exclusive Union League, St. Nicholas Society and the Seawanhaka-Corinthian Yacht Club; he held memberships in the New England Society, the Sons of the Revolution, Society of Colonial Wars and the Sons of the American Revolution.

It was Stanton’s mother, however, who had so far attracted the spotlight.  Elizabeth Cady Stanton was one of the leading activists in women’s rights, social reforms, and racial equality.  Her sometimes shocking stances included the belief that women should have control over sexual relationships and childbearing, her approval of interracial marriage, and the insistence that “to obey” be removed from wedding vows.  “I obstinately refused to obey one with whom I supposed I was entering into an equal relation,” she later said.

Henry was, of course, present at the funeral of his mother at 11:00 on the morning of October 29, 1902.  The New York Times noted “Miss Susan B. Anthony, Mrs. Stanton’s lifelong companion and co-worker in the campaign for women’s rights, sat near the casket, which was completely hidden beneath flowers and ferns.”

It may have been his failing health that prompted Henry and Mary Stanton to leave West 71st Street.  The couple was living in the Hotel St. Andrew, on 72nd Street and Broadway, when he died on the morning of December 5, 1903.

Another resident of the Hotel St. Andrew in 1902 was Charles W. Labagh, whose sister and brother-in-law lived at No. 241 West 71st Street, just down the block from the former Stanton house.  A bachelor, Labagh was described by The New York Times as “very wealthy.”  The newspaper explained on May 13, 1902 that although he owned a “fine home” in Cold Spring Harbor, he had come to the St. Andrew because he “has been suffering for a year from nervous prostration.”

A trained nurse had accompanied Labagh and he seemed to be doing well.  But then on May 12 he went to the 71st Street house of his sister, Mrs. Joshua I. Jones, for an outing.  Meeting him there were his other two sisters and his two brother-in-laws.  “The plan of the party was to take a drive, and for this purpose a barouche stood at the curb outside Mr. Jones’s residence,” advised The Times.

The outing would not come to pass.  Just as the party was preparing to leave, around 3:30, Charles excused himself, saying he wanted something upstairs.  As the family waited in the parlor, John D. Hewlett went upstairs to hurry him along.  He found that Charles had sliced his own throat twice.   The two men struggled, but Charles broke free and threw himself from the third floor window.

Charles Labagh survived his suicide attempt; but the family apparently felt he could not return to Cold Springs Harbor unattended.  He leased and moved into the former Stanton house, close to his sister.    The troubled man died in the house on April 2, 1904 at the age of 53.

W. Holman Smith’s plans for the row of houses had called for “tin roofs.”  It was a seemingly innocent structural decision that sent the neighborhood into panic during the summer of 1909.  J. D. Thomas was leasing No. 271 at the time, and around midnight on June 16 he quietly opened his front door and motioned to Special Patrolman James McLaughlin who was patrolling the street.  He whispered to the officer that he thought he heard burglars on his roof.

McLaughlin summoned another officer, John Bohen and all three men went inside the house and up to the roof.  The New York Times reported the following day “The policemen are heavy men, and they made considerable noise as they tramped to and fro on the tin roof looking for the burglars.”

Just as they were preparing to go back downstairs, a woman’s screams emanated from No. 269 next door.  “The policemen grasped their clubs and sped down the street.  They found Mrs. Bethune at a window shouting for help at the top of her voice.  She said that she had heard burglars on her roof,” reported The Times.  The newspaper felt “she had probably mistaken Bohen and his comrade for the thieves.”

Nevertheless, the police continued their search “with renewed enthusiasm.”  When the officers returned to the metal roofs, they were heard by William Volkhart, a real estate broker, who lived behind the Thomas house, at No. 256 West 72nd Street.  He telephoned the West 86th Street Police Station and reported that “he was being bothered by a desperate band which made no attempt to rob quietly.”

Additional police arrived on the scene and the neighborhood was thrown in terrified upheaval.  Finally, “The police came to the conclusion after half an hour’s search that the only burglars who had visited the district existed in the imagination of timid persons.”

In February 1921 Eleanor P. Manning purchased the house in the first change of ownership in 24 years.  She continued to lease it before selling it around 1933 to Charles G. Keller.   For decades the large private homes on the Upper West Side were being converted to apartments.  But it may have been the Great Depression which ended No. 271’s life as a single family home.  In 1937 architect Robert Teichman made alterations resulting in “two furnished rooms” on each floor.

Renters came and went with little notice.  One, however, did catch the attention of the U.S. Government.  In 1942 resident Joseph Trum landed on the Government’s list of Communist voters. 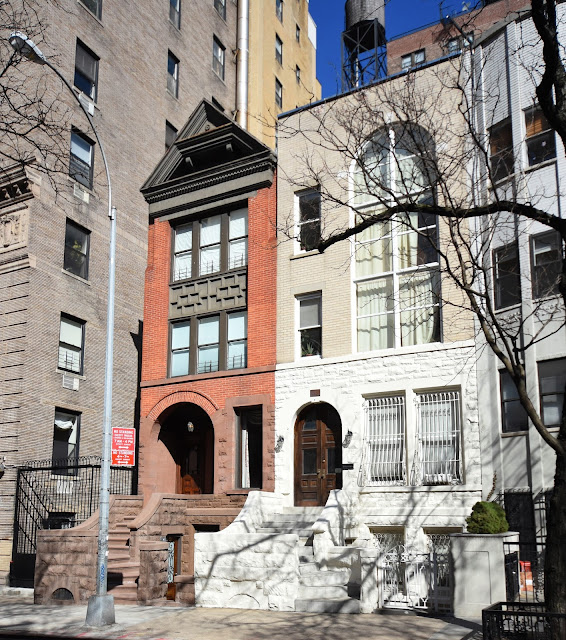 As the century drew to a close No. 271 was the last intact survivor of W. Holman Smith’s row.  In 1996 it was returned to a single-family residence and, other than replacement windows, looks remarkably as it did when completed almost 130 years ago.