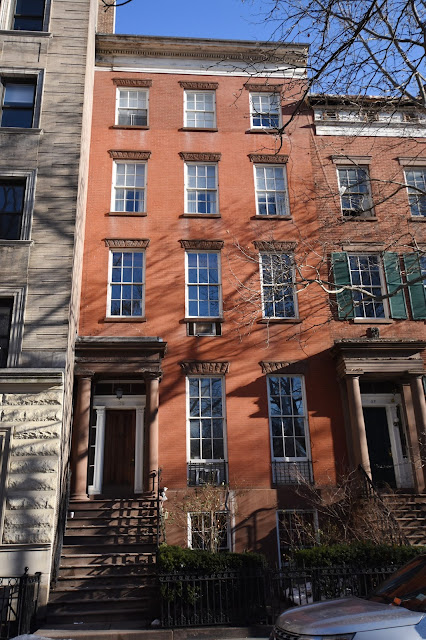 As Washington Square rapidly became an exclusive residential enclave, merchant James DePeyster Ogden constructed a three-story Greek Revival mansion at No. 26 Washington Square North in 1839.  An investment project, the brick home was entered through an impressive columned portico above a high brownstone stoop.  The single paneled door was elegantly framed, with sidelights and a transom allowing sunlight into the foyer.

The home’s fencing and stoop railings were highly unusual.  Along with more expected motifs—anthemion and rosettes—the tall, alternating finials were in the shape of pinecones and obelisks.  The pinecones sat on curlicues, representative of honeysuckle vines.

Longworth’s New York City Directory listed George B. Dorr in the house immediately upon completion.  Dorr and his wife Joanna had been living in the house of her father, Samuel S. Howland, at No. 12 Washington Square.  Howland, incidentally, built the house next door to the Dorrs, at No. 25, which was completed the same year.

Joanna Howland had been a sobering influence on her husband.  Before their marriage George had been expelled from Harvard University for “playing cards, drinking spirituous liquors, and making improper noise.”  He was now a wealthy and respected businessman.  But three years after moving into the house, 22-year old Joanna Dorr died.  Her husband moved into a “bachelor domicile” on Washington Place with his brother.

No. 26 became the home of John Oothout, president of the Bank of New York.  The Oothout family had been in America since the 17th century.  John and his wife, the former Maria Josephine Youle, had eight children, two of which, John and Jane, had died in 1838 and 1839 respectively.
John Oothout died on January 28, 1858.  His widow remained in the Washington Square house as the children married and one-by-one left.  Daughter Marie Josephine was the last to marry.  She was highly involved in the Orphan Asylum Society of the City of New-York and by 1862 was its Treasurer.  Also briefly living in the home were daughter Eliza and her husband, woolen merchant Louis P. Sieberg.

The elder Marie Oothout died on March 24, 1870, six days before her 75th birthday.  Marie Josephine remained in the house until wedding to James Bowen on April 27, 1875 at the age of 50.  She died two years later.  (In the meantime, Eliza and Louis P. Sieberg had moved next door at 25 Washington Square and in 1871 had a stable constructed in the rear on MacDougal Alley.)

No. 26 Washington Square North soon became home to the William Dare Morgan family.  Morgan was married to Angelica Livingston Hoyt, whose social pedigree was remarkable by any standards.  The New York Times would later recall that she “was born at Staatsburg, N.Y, in the Livingston house…Through her mother, a Livingston, she was closely related to the members of that family who had played such a prominent part in the early days of the Republic.  Among her ancestors were two signers of the Declaration of Independence.”

A ship owner, William Dare Morgan was Vice President of the Produce Exchange, a partner in Grinnell, Tinker & Morgan, and a governor of the Knickerbocker Club.  He was a founder of New York Hospital and graduate of Yale.  The couple had four children, Ruth, William Gerald, Margaret, and Geraldine.

Morgan died in the house on Sunday, April 24, 1887 at the age of 50.  His funeral was held in Grace Church three days later.  The church was crowded with some of the most powerful men in Manhattan, including John Jacob Astor, Amos Cutting, William Schermerhorn, John Jay, H. E. Pierrepont, William Cutting, Levi P. Morton, Joseph H. Choate, and William Rhinelander Stewart.

Victorian millionaires rarely relied on life insurance to assure their family’s financial stability.  But the day following Morgan’s funeral The New York Times reported that he had been insured for $50,000.  The benefit—equal to about $1.3 million today—was added to Angelica Hoyt Morgan’s already substantial personal fortune.

At some point a fourth floor was added and, most likely at the same time, the prim stone lintels were remodeled as chunky undressed blocks, similar to the Romanesque Revival architecture gaining favor.

Angelica and her children remained in the house.  And in 1896 her 77-year old aunt, Angelica Livingston Hamilton who was in ill health, came to live.  The widow of Alexander Hamilton, the grandson of the Revolutionary general of the same name, she had been prominent in society and charitable work, but, as noted by The New York Times, “of late years she had been compelled to live a quiet and retired life.”

Angelica Hamilton’s “retired life” for the last two decades had played out at her country seat at Irvington.  Her delicate health now made it necessary to come to the home of her niece.  She died there on April 22, 1896.  The Times noted simply “The cause of her death was old age.”

Geraldine Morgan’s wedding had already been scheduled for just two months later.  It was perhaps because of her great-aunt’s death in the house that the wedding was held in Staatsburg, where Angelica still maintained the Livingston estate.  On Tuesday, June 16, 1896 Geraldine was married to Lewis Steenrod Thompson in St. Margaret’s Church there by the Reverend P. McD. Bleecker, a relative.

Just five months later, on November 22, the engagement of Margaret to Adam Gordon Norrie was announced.  It was a socially-notable match, joining two of the wealthiest families of New York.  The couple was married almost a year to the day after Geraldine, on June 15, 1897, in the Morgan house on Washington Square.  As always, the newspapers remarked on the bride’s family connections.  “She is a granddaughter of the late Mrs. Lydig Hoyt and a cousin of Mrs. Ogden Mills,” said The Times.

As had been the case with her sister, Geraldine’s wedding was affected by a death in the family.  Her widowed grandmother, Angelica’s mother, had lived steps away at No. 20 Washington Square North. Geraldine Livingston Hoyt died there at the age of 75 in April 1897.

The New York Times noted that “Owing to a recent death in the family of the bride, yesterday’s ceremony was very quiet, and was attended only by a few relatives and intimate friends.”

Ruth and William, still unmarried, remained at No. 26 with her mother; and following their honeymoon trip, the Norries moved in as well.   They were all catered to by a large household staff.   In 1909 a dispute between Ellen Donovan, the cook, and Sadie McDonough a housemaid, ended up in court.

On March 28, 1909 The Times reported that Angelica Morgan, “philanthropist,” and “half a dozen of her servants rallied to the support of a portly cook who was under arrest yesterday in the Jefferson Market Court charged with sticking several pieces of hot toast to the housemaid’s face with the aid of scalding milk.”

The newspaper described Ellen, saying she “touched the scales at 290,” and noted Sadie was “a thin woman, much younger.”

Sadie told the judge that she “was boiling milk last Saturday night in the kitchen of Mrs. Morgan’s home to make some milk toast” when Ellen suddenly grabbed the pot “and plasters my face with it.”  She claimed that she fell unconscious and two other housemaids, Miss Creeley and Miss Rogan, “picked me up and laid me tenderly on the lounge, when I fainted right into unconsciousness.”

She implored the judge to look at the scars on her face.  “And here’s a letter from my doctor.  I was laid up for five days.”  The letter, signed by Dr. Louis Lesser, said that “Sadie was burned by scalding milk, said burns causing nervousness.”

Ellen then took the stand, insisting that “this lady isn’t telling the truth.  She was fighting all last Saturday afternoon.  You know she had the gall to ask for eggs and cocoa for her supper, and you know she isn’t allowed to have them.  And I never scalded her with hot milk.”

Magistrate Barlow had trouble maintaining order as the two women argued back and forth between themselves.  When he asked Ellen how, then, Sadie got burned, her lawyer objected.  “We don’t admit she was burned.”

Sadie blurted out “Well, I was.”

“Well, why does she lie?” said Sadie.

The gavel repeatedly banged down on the bench for order

Angelica Morgan was called to the stand.  She testified that she knew nothing about the dispute, other than she had called a doctor when two servants told her Sadie was “in a very excited condition with a towel to her face.”  She added that the doctor “said the injuries were very slight.”

William Gerald Dare Morgan had graduated from Yale University in 1901.  In 1915, with war raging in Europe, he went abroad as a war correspondent.  But he was back at No. 26 Washington Square before April 1916 when his engagement to Mary E. Newhold was announced.  Ruth had just been elected President of the exclusive Colony Club.

In 1923 Angelica was still in the Washington Square house that had been her home for half a century.  Ruth and the Norries were still there as well.  A. Gordon Norrie was now retired and their only son, Lewis Gordon Norries was a Princeton University senior where he was considered a hockey "star."

At around 3:00 on the morning of September 23, 1923 Lewis Norrie’s automobile was involved in a head-on crash near Long Branch, New Jersey.  In the car with him was Adele Ryan, granddaughter of millionaire Thomas Fortune Ryan.  Norrie died in the hospital later that afternoon.

By the early 1930s Angelica and Ruth, still unmarried and now President of the National League of Women Voters, had left Washington Square and moved to No. 153 East 61st Street.  Angelica died there at the age of 85 on March 16, 1933.  Ruth died the following year.

In the meantime, the old Morgan house had become home to former silent movie executive Richard West Saunders.  The New York Times said that “there he indulged his love of the arts.  He had a notable library and was a patron of music and painting.”  He had been controller of the Famous Players-Lasky Corporation, which merged with Paramount.  The newspaper called him “a well-known after-dinner speaker and raconteur, a lover of the arts, [who] had written much verse.”  He died on June 26, 1934 at the age of 59.

Saunders was followed in the house by well-known attorney John Pinkerton East.  His residency would be short.  He died suddenly on New Year’s Day, 1936.

No. 26 was soon converted to apartments.  It was the scene of tragedy after 38-year old David R. Husted turned on the jets of his combination gas stove and refrigerator in his two-room apartment on the second floor.  The unmarried insurance broker had moved in in November 1939.  He was dead when he was found on the morning of July 22, 1940.

The house had several noted residents in the coming years, among them painter Everett Shinn who lived here until his death in 1943; and the colorful financier Charles V. Bob.  Bob appeared in New York in 1927 and quickly became known for his chumming with “millionaire bankers, prominent social figures, wealthy sportsmen, leading fliers and even some of the better known bootleggers, including Salvatore Spitale,” according to The Times.

Bob had owned two private planes “fitted out parlor fashion,” an estate at Montauk Point, and an impressive apartment at No. 1010 Fifth Avenue.  He had offered Charles Lindberg $1 million in 1927 to head an aviation stock promotion.  (Lindberg refused.)

It all came crashing down in 1927 when he was indicted for defrauding investors of $6 million.  He fled the United States; but was finally brought back for trial and was sentenced to seven years in 1939.  Although he only spent two years in prison, his fortune was gone.  He moved into the Washington Square house, and died in November 1944.

In 1991 the Morgan house was converted to five apartments, including a triplex.  After more than 175 years the house with the somewhat quirky lintels and the unusual ironwork survives as reminder a gracious period on Washington Square.  Except those times when servants battled with hot toast and milk.

photographs by the author
LaptrinhX.com has no authorization to reuse the content of this blog
Posted by Tom Miller at 2:40 AM