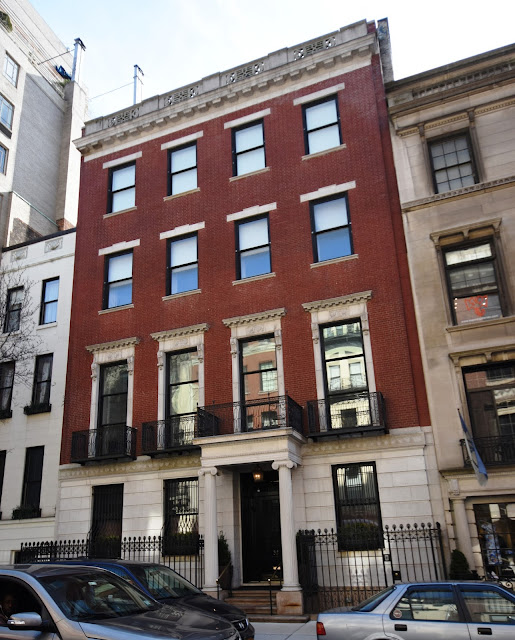 In 1904 spinster sisters Elizabeth and Mary Gardiner Thompson laid plans for a new home--one large enough to accommodate their bachelor brother, Charles Griswold Thompson, as well.  The siblings were past middle-aged (Mary was 61 and Charles was 64, for instance) and extremely close.   Although each was wealthy by anyone's standards, they moved quietly among society; rarely appearing in newsprint other than in articles announcing charitable donations.

They were members of one of the oldest families not only in New York; but in America.  Lord Lion Gardiner purchased Manchonock Island on Long Island from the Native Americans in 1639.  It was later renamed Gardiner Island.   The Thompson branch also stretched back to Colonial times in New England.   Their now-deceased parents were David and Sarah Diodati Gardiner Thompson.  David Thompson had been President of the New York Life Insurance and Trust Company (later the Bank of New York) for many years.

The sisters purchased the two three-story brownstone rowhouses at Nos. 38 and 38 East 67th Street in 1904.  The architecturally outmoded homes, constructed in 1878, were demolished to make way for the Thompsons’ cutting edge mansion.

Construction on the Thompson house began in 1905.  When Bacon filed plans on January 12 that year, the staggering cost of the project prompted the New-York Tribune to run a headline “Dwelling House to Cost $200,000.”  That amount would translate to about $5.6 million in 2016.  The newspaper noted that the house would be five stories tall, 40-feet wide, “fire-proof,” and faced in brick with Tennessee marble trimmings.

The Thompson mansion was completed in 1906.  A white marble rusticated base upheld three floors of red Flemish bond brick.  The fluted Ionic portico, which supported an iron-railed balcony, could have been plucked from London’s Mayfair district. The second story openings were framed in marble and capped by cornices on small brackets.  The treatment of each succeeding floor of windows was less ornamented.  Above the marble cornice, a parapet, pierced in a modified Chinese Chippendale pattern, hid the uppermost floor from view.

A year after moving into their new home, the three siblings sat down to devise their wills.  Being unmarried and childless, their vast fortunes necessitated careful administering.  Elizabeth, Mary and Charles chose a list of charities, a few modest bequests to relatives, and then agreed to a clever plan.  As the first sibling died, his or her estate would go to the surviving two.  Upon the death of the next, the sole remaining person would inherit that estate.  And when the final Thompson died, the combined fortunes would be parceled off to the list of charities.  It was an idea that would not be well-received by waiting relatives when the first will was read.

Even in their travels, the three Thompsons were together.   In 1910 the sisters started their summer in the fashionable Curtis Hotel in Lenox, Massachusetts.  The New-York Tribune reported from the resort on July 8 “The Misses Mary and Elizabeth G. Thompson…will go to Southampton, Long Island, to-morrow for the midsummer months.  Charles F. Thompson, of New York, arrived to-day to accompany the Misses Thompson.”

On Monday, November 17, 1913 Elizabeth Thompson died in the 67th Street mansion.  Her funeral was held there four days later.  Of her $4 million estate, $3.25 million was slated for charities—among them the Children’s Aid Society and the New York Association for Improving the Condition of the Poor—following her siblings’ deaths.  Her two nephews, David and Robert Gardiner, and a niece, Sarah Gardiner, received $94,822 each—more than $2 million each in 2016; a perhaps disappointingly small figure to the heirs.

Elizabeth made the important point that her $24,160 share of the furniture in the 67th Street house was to go to Mary.

Six years later, on Monday December 8, 1919, Charles Griswold Thompson died.  His funeral, too, was held in the mansion.  When his will was probated two months later the Gardiner family had had enough of the three-way arrangement the Thompsons had come up with in 1907.

Although Nora Loftus Gardiner was not a blood relative—she had married the Thompsons’ nephew Robert A. Gardiner, now deceased—she immediately sued to overturn the will.  Nora received nothing (her husband would have inherited $100,000 had he survived).  On February 25, 1920 the New-York Tribune reported “Mrs. Gardiner, in objecting to the will of Mr. Thompson, alleged that he was of unsound mind when he executed it in 1907, although it was shown that ten years after making the document he remained as trustee of the New York Life Insurance and Trust Company.”

Mary Gardiner Thompson agreed to allot Nora’s two sons, Alexander and Robert David, $233,000 each.  Nora still walked away with nothing.

Mary continued living on alone in the expansive mansion with her servants.  She generously contributed her fortune to worthy causes; most often doing so with little fanfare.  Nevertheless, some of her donations could not be overlooked.  On November 25, 1924 Bishop William T. Manning announced at a luncheon that “he had received a check for $200,000 from Miss Mary Gardiner Thompson” toward the completion of the Cathedral of St. John the Divine.  And the American Society for the Control of Cancer announced in February 1927 that the “largest gift for the month was one of $25,000.”  When the country was plunged into misery by the Great Depression she wrote a check for $100,000 to the Emergency Unemployment Relief Fund in October 1931.

On April 22, 1935 Mary Gardiner Thompson died of pneumonia in her house at the age of 91.  In reporting her death, The New York Times could say nothing about social clubs and parties; but that “Miss Thompson gave away hundreds of thousands of dollars to religious, charitable and other organizations.  Much of her beneficence was done so quietly that few knew of it.”

The combined Thompson fortune had reached $15.5 million—more in the neighborhood of $265 million today.   As the siblings had laid it out in 1907, the bulk of the massive estate was divided among six institutions.  And once again the Gardiner family was displeased.

Mary’s grandnephews and niece were to each receive $50,000, a joint interest in a $300,000 trust, and a share of the family heirlooms.  Robert David Lion Gardiner sued in February 1936 to have the will declared invalid “on the ground that undue influence was exerted upon his great aunt.”

The following month, on March 12, he stormed out of court “accompanied by his mother” after a settlement was reached doubling the amount the Gardiner heirs received.  The New York Times’ sub-headline read “But He Is Not Satisfied” and the article noted that Gardiner told reporters “he was ‘coerced’ into agreeing to the settlement.”  He complained “I was denied a jury trial.”

In addition to his cash settlement, Robert Gardiner and his sister, Sarah, received the 67th Street mansion.   When they leased it in 1938 to “Argyle House,” it was announced that “the lessee intends to renovate the building and sublease the space in small units.”

For some reason, perhaps because of the economic conditions, the conversion of the mansion to apartments was not completed.  By 1943 Randolph Godfrey Philips was living here.  Since 1929 the young go-getter had been head of the United Corporation, an investment company the major stockholder of which was St. Regis Paper.

But 1943 did not start out as a good year for the 32-year old.  On February 6 The New York Times reported that stockholders in the United Corporation were seeking to oust the entire management.  And about the same time Philips received his draft notice.

With the country embroiled in World War II and in the midst of a major business crisis; Philips ignored his induction orders.  On February 23 he was apprehended by Federal authorities for violating the Selective Service Act.  Things only got worse on March 4 when a stockholders' meeting made it evident that his tenure as head of the corporation was ending.

Two weeks later, on March 18, Randolph Philips stood before Judge Matthew T. Abruzzo to explain why he had evaded the draft.   He explained that he wanted to be excused from military duty because he was a conscientious objector.

The Judge asked “Suppose we were attacked here in the city and a German storm trooper had you up against that wall, would you fight to save your life?”

“No, I would try to reason with the man as a human being.  I would rather die than kill a man even under such circumstances.”

When asked what religion he followed, Philips responded “My religion is my own and has been gleaned from many sources.  I am not a member of any formal cult or creed, but I have been a believer in non-violence since childhood.  I cannot kill.”

Judge Abruzzo had Philips brought with him to another floor where the judge was scheduled to administer the oath of allegiance to 400 new citizens.  After he did so, he told them “There is a person in the rear of the room whom I want to hear what I am going to say.  You new citizens have taken an oath which obligates you to defend this country with your lives.  There is a man in the rear who is willing to let you do this for him though he was born in this country and you were not.

“If you violate your oath to defend the country, the government may cancel your citizenship, but it may not revoke the citizenship of a person born here who refuses to carry out his obligations in that regard.”

After considering the case, Assistant United States Attorney Frank J. Parker asserted “there was no legal ground for granting the release of Philips.”  The Times reported “Dressed in civilian clothes, Philips was returned to Camp Upton in the custody of two Army officers.”

The Thompson mansion endured a series of various uses.  In 1947 it became home to the Asia Institutes, a trio of schools focused on a “greater awareness in the United States of the importance of Asia to world peace,” according to its founder Dr. Arthur Upham Pope.  It shared the house with the Helen Norfleet School, and the Violin Cello Teachers Guild.

In 1954 the house was converted for use as the Dresden Madison Nursing Home.  Its residents throughout the next decade included aged artists, writers and wealthy New Yorkers without close families.   It was then purchased by the Egyptian Government as its Mission to the United Nations.  According to architect Michael Gadaleta several years later, “They…chopped up the rooms into little suites, placing bathrooms in parlors and dining rooms…The ceilings were destroyed, woodwork was painted over.”

In March 2001 two wealthy bachelors, Michael Gleissner, 32 years old, and George San Pietro (the former husband of Wheel of Fortune hostess Vanna White) purchased the house for $9.75 million.  They initiated a renovation that included restoring the façade and removing as many as 30 coats of paint on mantels and woodwork.  Moldings were reproduced to replace those lost or damaged.

The result was a shared first and second floor and the basement level; San Pietro and his two children had the third floor and Gleissner moved into the top floors.  The renovated house had several amenities the Thompsons could not have even envisioned:  a Japanese meditation room, a gym, and a movie theater in the basement.

The owners sold the mansion two years later to hedge-fund manager Stephen Feinberg for $19.5--a tidy profit.  Gillis Architects PC undid a few of the renovations to return the residence to a single family home.  Other than the replacement windows, the mansion looks as it did in 1906 when three fabulously wealthy siblings moved into their new home.