The Romantic Compound at No. 93 Perry Street 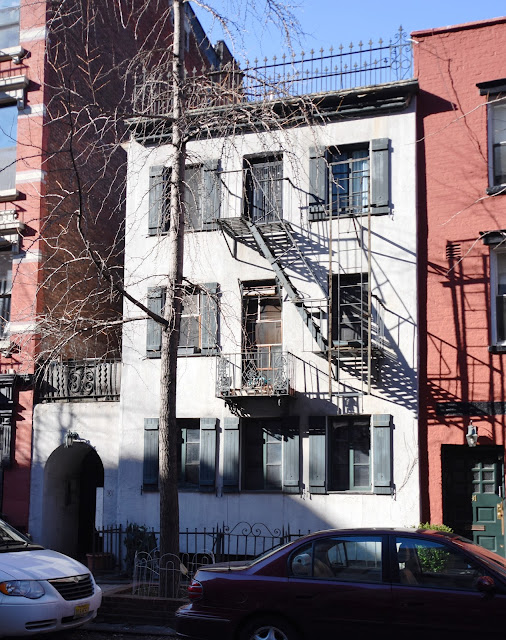 In 1811 Carpenter-builder Abraham A. Campbell leased the plot at what would become No. 93 Perry Street.  It may have been the construction boom in Greenwich Village in the 1820s that prompted him to erect a new wooden shop at the rear of the lot in 1827.  A year later he built his frame house at the front of the property.  Clients accessed the shop by a narrow “horse walk” at the left side of the house.  Campbell lived and worked here until late in 1832.  An apparently righteous man, while living here he annually donated $1 to the American Tract Society.

He sold the lease “and the buildings thereon” that year.  The shop building became home to the trap-making factory of Miles Standish.  A direct descendant of Captain Myles Standish of the Plymouth Colony, Standish made traps for the American Fur Company, among others.

The Miles Standish Company of New York was one of the largest, if not the largest, of the manufacturers of iron traps for fur traders in the Rocky Mountains.   In 1832 Nathaniel Wyeth ordered 240 traps for one expedition.  It is possible that his business quickly outgrew the shop behind No. 93 Perry Street.  He left in 1835 and his later traps are afterwards marked “90 Perry” directly across the street.
Mary Jones and her husband lived in the house in the mid-1850s.  Mary showed signs of depression or other emotion problems in August 1855; and they came to a climax on August 26.  She attempted suicide by jumping from a second story window.  Her plans were thwarted by the relatively short distance to the sidewalk.

The New York Times reported she jumped “to the pavement, whereto falling heavily she fractured the bones of a leg, besides causing severe internal injuries.”  The newspaper noted that for days she had showed signs of “mental derangement;” and reported “She lies in a precarious state, but may possibly recover.”

Following John B. Law, who died in the house at the age of 35 in 1876, No. 93 became home to the Robert B. Pitcairn family.  Pitcairn was a policeman and he and his wife, the former Mary C. Wing, had three children: Joseph, Mae and Ida.

Robert Pitcairn worked from the 9th Precinct; but was given a temporary assignment in 1878 which he may have been happy to be relieved of.   On November 16 that year The City Record noted that he had been returned to patrol duty, having been “heretofore details to duty at the several public baths.”

In his 1885 Our Police Protectors, A. E. Costello noted that Pitcairn was head of Corporation Ordinances in the 9th Precinct.  He described the Greenwich Village precinct neighborhood saying the residents had “the tendency to coalesce, or herd in flat, apartment or tenement houses, more than in any other precinct.  Its streets are quiet, cobble-stoned; and its iniquities, according to the Police record, few.”

That same year the Pitcairns had visitors.  Terence Curry, 50 years old, arrived in town from Johnstown, New York, with his daughter.  Because the Pitcairn family had no room to put up their guests; so they went to Earle’s Hotel at Canal and Centre Streets.

A common problem in 19th century New York hotels was the modern gas lighting.  Visitors from more rural towns were accustomed to kerosene lamps, which they blew out.   Hotel clerks who recognized “rubes” often cautioned them to turn the gas key to extinguish the light.  This did not happen with Terence Curry.  The New York Times reported on December 2, 1885, “He blew out the gas and yesterday morning was found dead in his bed.”

In the meantime the Snodgrass family, Pitcairn’s landlords, had renovated the former shop to a residential building.  James Snodgrass owned much property in the Village, including other buildings on Perry Street, on West 4th Street and West 11th.

The “Widow Love,” her invalid son and 16-year old daughter, Grace, lived on the second floor at No. 93 Perry in 1891, probably in the rear building.   Mrs. Love was a strait-laced, God-fearing woman.  She and her headstrong daughter did not always see eye-to-eye.  The Sun, on March 27, 1891, wrote “Now, if there is one thing that the Widow Love detests more than another it is theatrical performances of any kind.  Theatres she dislikes and museums she considered low and godless.”

Grace “has always been a good, quiet girl, and has never been much away from her mother,” according to the newspaper.  But early that year she made friends with Stella Taylor, who was slightly older than she and lived nearby on Greenwich Street.  Mrs. Love viewed her “with suspicion,” especially after Stella convinced Grace to go to museums with her.   Many “museums” at the time were more like stationary carnivals, filled with curiosities and wonders which were often faked.

And so in February Stella and Grace visited Huber’s Museum on 14th Street.  There they saw the “Human Stepladder,” Leander Fuller.  A congenital deformity (The Sun blamed it on “undue haste on the part of nature in making him up”) resulted in one leg being two feet shorter than the other.  The newspaper cruelly described him as “this freak” and added “he is singularly plain.”

The girls “struck up flirtation with the freak, and got on very friendly terms with him.”  Grace visited the museum several times, not always with Stella.  When Fuller’s appearance at Huber’s was over, he appeared at Doris’s Museum far to the north on 125th Street.  The girls followed.

All the while Stella had been teasing Grace, accusing her of being in love with “the stepladder.”  Grace laughed it off and continued making fun of Leonard Fuller.  But then, on Wednesday March 25, 1891 Grace confided that she and the human stepladder intended to elope the next Sunday.  She said Leonard was booked in a “fine engagement” in another city.

Stella went straight to her mother, who sent immediately for Widow Love.   Mrs. Taylor’s first words left the woman speechless.  The Sun reported “Mrs. Taylor, who is short and stout, and a good, round, speedy talker withal, said: ‘Mrs. Love, that daughter Grace of yours is goin’ to elope with a museum freak on Sunday.”

Grace vehemently denied the elopement plans, telling her mother “it was a harmless flirtation and nothing more.”  But Mrs. Love was not convinced.  She went to the Jefferson Market Police Court and asked for help; but because Grace was over 16, there was nothing they could do.  Nevertheless, Agent Finn had a long talking-to with the girl “and scared her until her blue eyes were much reddened with tears.”

Her mother vowed to keep vigilant until Leonard Fuller was out of town.  “As to the freak himself,” noted The Sun, “he pretends to know nothing at all about the affair, although he will not deny that his charms have had an effect upon the young woman.”

In the 1920s the New York Evening ran a regular column entitled “Little Sketches About Town.”  On August 29, 1924 the column portrayed the hidden courtyard and quaint wooden buildings of No. 93 Perry Street.  The article caught the eye of author H. P. Lovecraft and according to his biographer, S. T. Joshi in his A Dreamer and a Visionary, he sought out the location that very day.

Lovecraft used No. 93 Perry Street as the setting for the end of his story “He.”  Here the narrator finds himself “at the entrance of a little black court off Perry Street.”

At the time Lovecraft discovered No. 93’s hidden courtyard, Greenwich Village had become the center of Manhattan’s artist community.  For over a decade old houses were being transformed to studios and their facades remodeled to Mediterranean, Tudor and other romantic fantasies.  In 1927 builders MacKathryn & O’Sullivan purchased No. 93, announcing on April 17 they would “remodel the premises into studios.”

The firm hired architect Floyd McCathern to design the project.  He moved the entrance of the main house to the side, accessed through an arched opening.  The wooden buildings were coated in thick stucco; and the front building was given a second story Spanish balcony.

Among the myriad residents who came and went over the next decades was author and journalist Lamar Middleton.  His extraordinary career included working for The New York Daily News, the Paris Herald, and the Paris edition of The Chicago Tribune.  His several historical books included The Rape of Africa; Revolt U.S.A., which analyzed 10 minor American riots; and Heirs Apparent: The Vice Presidents of the United States.  He was 67 years old when he died, living here, on May 2, 1969. 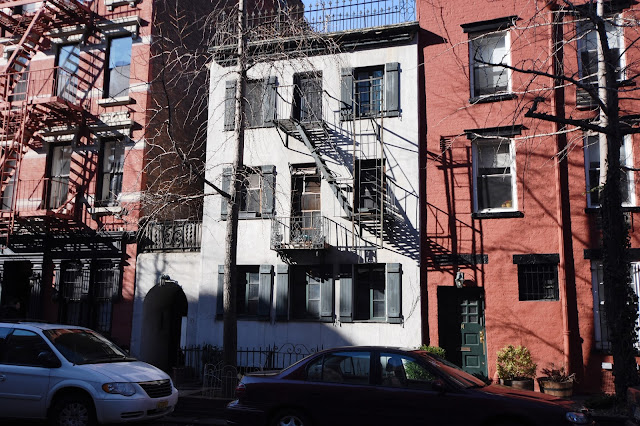 The 1927 makeover of the two structures resulted in a new type of charm that survives today.  The quaint Mediterranean compound with its hidden courtyard is emblematic of the charisma of Greenwich Village.