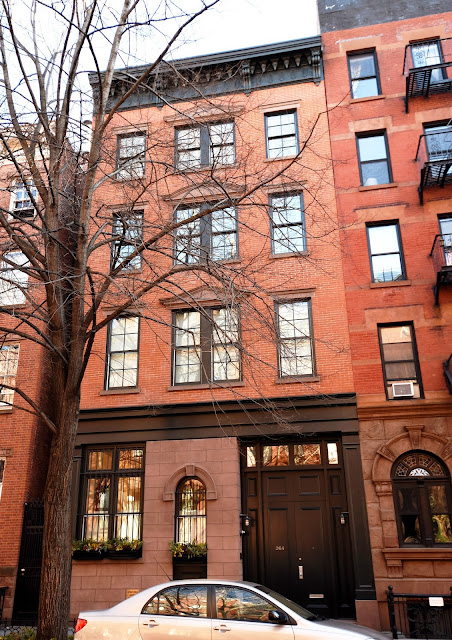 In the post-Civil War years Peter Nodine earned his living as a carman—what we would call today a trucker, or deliveryman.  Nodine, who lived several blocks north on West 17th Street, would have owned at least one team of horses and a wooden wagon.  But his construction project at No. 264 West 11th Street, completed in 1868, suggests that his trucking business was no small operation.

Peter Nodine did not use his new stable building for long.  By 1874 it was owned by John H. Berdan, who lived in Paterson, New Jersey.  The commodious building was necessary for Berdan’s freight business, which operated on both sides of the Hudson River.  He had the contract for handling all the freight of the Erie Railway Company.

Berdan earned an extra $35 on November 3, 1874 when he leased a portion of the 11th Street stable to the City as a polling station for the General Election.   But it would appear he did not really need the money—about $750 in today’s dollars.  By 1882, according to William Nelson’s Biographical Sketches, Berdan was handling about 50 tons of freight for the Erie Railway every day--$50,000 worth every year.  On the Paterson side of the river, “twelve teams of horses are kept busy.”

The volume of business apparently prompted Berdan to move his New York operation from West 11th Street in 1881; although he retained possession of the building.  That year he leased it to Elias T. Hopkins for “7-12 years” at a yearly rent starting at $1,200 and rising to $1,400.

Like Nodine and Berdan, Hopkins operated his freight business from No. 264.  Much, if not all, of his contracts were with the produce companies downtown.  His colorful entrance at the Produce Exchange on June 29, 1892 was partly political and partly a marketing event.

The New York Times reported “Elias T. Hopkins, a transportation man, personally conducted the first Republican demonstration of the campaign on the Product Exchange yesterday afternoon.  He appeared there wearing a vast ‘grandfather’s hat,’ a structure of straw about a foot and a half high and with a spreading crown of vast extent.  As he is very tall, it was an imposing spectacle.”
Hopkins was obviously well-liked among the produce community and his antics were well received.  “He was warmly greeted by the brokers, and the hat was carried around the grain pit in triumphal procession.”

Two years later Hopkins was back at the Produce Exchange creating another newsworthy incident.  William M. Manwaring had arrived that morning making fun of Tammany Hall by bringing a prize game cock from his upstate farm and a dead chicken.   The dead fowl was labeled “Tammany” and the rooster wore “a highly colored anti-Tammany decoration.”

The brokers were gleefully fed the rooster from the corn bags on the sample tables when Elias Hopkins, previously tipped off about the demonstration, showed up with a white Leghorn rooster.  Business in the Produce Exchange was set aside as order in the room disintegrated.  “This bird also partook of the corn, while the crowd danced, shouted, cheered, and indulged in general antics,” reported The Times.

But then someone in the crowd had another idea: a cock fight.  “They were hauled out of the pit, where they had been so busy eating as to be unmindful of their inborn enmity, and placed in the middle of the floor.  The crowd formed a ring around them.”

Manwaring and Hopkins prodded their respective roosters into “mutual antagonism.”  But just as they were about to engage in battle, the Floor Committee broke up the illegal game, threatening to report everyone concerned.  “The owners of the birds had no recourse except to make a disconsolate retreat, with their championship untried.  The crowd drifted back to business.”  One is left to wonder if Hopkins’ Leghorn was brought back to West 11th Street.

Elias T. Hopkins retired when his lease on No. 264 West 11th Street expired.  John Berdan then operated the building as the Abingdon Boarding and Livery Stables.   He received a lucrative contract on August 28, 1896 when the City approved “the acquiring of patrol wagon stabling accommodations from the Abingdon Boarding and Livery Stable, No, 264 West Eleventh street, for the Ninth Police Precinct.”  The building would be rented at $60 a month (about $21,000 a year today) through the turn of the century.

John H. Berdan’s sons, William and Henry, inherited the stable.  Although William transferred his half ownership to his brother on November 26, 1901; it was William who renewed the stable license in 1906.  Interestingly, that same year, on October 3, I. S. Combes received his license from the city “to keep stable in cellar” here.

By now horses were slowly disappearing from the streets of New York as motorized vehicles replaced the horse-drawn drays.  But No. 264 continued as a trucking headquarters when Siegler Brothers, Inc. took over the space decades later in 1974.  The firm, founded in 1895, advertised “local, long distance and international moving, storage and packing.”

In addition to its moving business, the company also sold used furniture and other items from the building.  Richard Siegler explained to journalist Terry Trucco of The Times in May 1994, “Often, when you move someone, they ask you to take things away.  And we wind up with it.”  Trucco said “Instead of holding auctions, Siegler Brothers sells second-hand goods outright.”

The old stable building would not be storing furniture and moving trucks for much longer, however.  In 1999 a dramatic conversion turned the structure into a one-family dwelling.  The truck bay was filled in with plaster-covered masonry that mimics brownstone.  The cast iron piers and entablature remain exposed.  And above, the cleaned façade hints at the sounds of horses hooves and creaking, iron-rimmed wagon wheels of a century and a half ago.