Justus H. Rathbone was impressed by Irish writer John Banim’s 1821 play Damon and Pythias which highlighted the ideals of friendship, loyalty and honor.  In February 1864 he founded The Knights of Pythias, a fraternal group which stressed those qualities and provided philanthropic aid.

Like other secret societies, The Knights of Pythias was organized around mystic rituals and included ceremonial props and costumes.  Local units were called “Castles” (a term later changed to “Subordinate Lodges”), and members, depending on rank, were Pages, Esquires and Knights.  And, like the Masons and Shriners, by the early 20th century their elaborate lodges reflected exotic architectural styles—Moorish, Egyptian and Byzantine, for example.

In the mid-1920s the Pythians began accumulating property for its new Manhattan lodge.  They had chosen a rather unlikely location—West 70th Street between Columbus and Amsterdam Avenues, a narrow, residential street.  By 1926 eight four-story houses had been demolished and construction begun.

The Knights of Pythias turned to architect Thomas White Lamb to design the large building.  Their choice was possibly influenced by his reputation for creating lavish motion picture palaces for the Fox, Loew’s and the Keith-Albee chains.  The Pythian Temple would emerge in 1928 as an exotic $2 million behemoth among the rowhouses--the counterpart of an epic silent movie set, 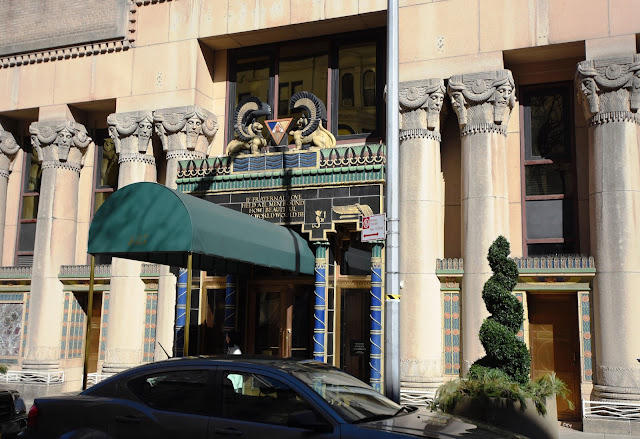 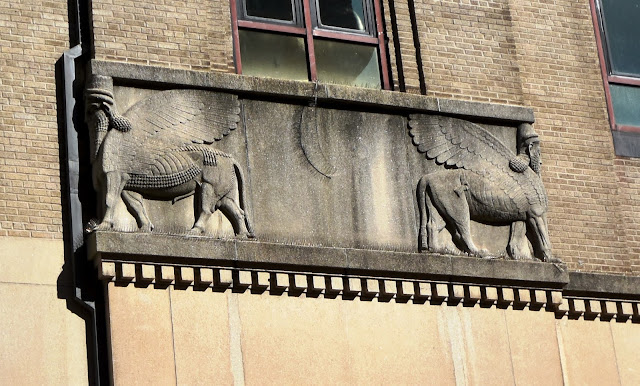 Even before the lodge was completed the main auditorium space was leased.  On October 6, 1927 Dr. Nathan Krass, rabbi of Temple Emanu-El, preached his Yom Kippur sermon on “Tolerance” here.  The following month an operatic concert was held here; and on January 20, 1928 the New York Press Club held an “entertainment and dance.”

Five days later the building was officially dedicated in the larger of the two auditoriums.  More than 1,600 persons were in attendance and the program was well underway when Mayor James Walker—who had a reputation for being late—arrived.  He had not been informed that his arch rival, former Mayor John H. Hylan, would share the stage with him.

Walker did not notice Hylan until he had already begun his address.  He handled the awkward moment by nodding to his nemesis and saying “If I’d seen you when I first came in, I would have paid my respects then.  Time has brought a sympathy for you I never held before.”

Walker joked about his tardiness, saying “I suppose you have heard of the ‘late Mayor.’ It is a characterization I can’t deny.”  But he apparently did not appreciate the shock of Hylan’s presence.  Following his speech, in which he congratulated the Knights of Pythias on the new building, he walked off the stage and left.

The larger auditorium featured a pipe organ; and the Christman Piano Co. of New York proudly announced that the Temple had purchased eight pianos, “some of which are Studio grands and the rest uprights.”   At least one of these would be housed in the smaller auditorium, which was capable of holding 500 persons.

The new building offered members a gymnasium, a bowling alley and billiards room in the basement, 15 lodge rooms decorated in Aztec, Egyptian and other motifs, and a rooftop solarium.

The auditoriums and meeting rooms were routinely leased for wedding receptions, musical programs and lectures.  Meetings as diverse as those of the Christian Science Liberals, graduation exercises of the Jewish Theological Seminary, and the church services of the Manhattan Congregational Congregation were held here.

The week-long hazing of Columbia University fraternity pledges ended here on February 17, 1929.  The Columbia Spectator reported three days later, “Since noon of last Tuesday twelve Sigma Chi pledges have been going through the well known miseries connected with ‘Running Week.’  Much to their relief it all ended Sunday night with the formal initiation and banquet.  These functions were held at the Pythian Temple on West Seventieth Street.”

While the Calvary Baptist Church was being constructed in 1929, the congregation held its Sunday services and its weddings and funerals here.  And in April 1930 the Milton Herbert Gropper and Oscar Hammerstein II play New Toys opened here by the Garfield Players.

By now many of the meetings held here were of a more political nature.  The first session of the Annual Convention of the Federation of Polish Jews met in May 1930.  More than 400 delegates met to draft a resolution to Warsaw asking for aid for Polish Jews.  That same month Daniel F. Cohalan and Saliendra nath Ghose addressed Indian Nationalists on the 73rd anniversary of the Sepoy Mutiny and the imprisonment of Mahatma Ghandi.  And the following year the United Romanian Jews met here, as did the convention of the Advancement of Atheism, formed five years earlier.

While Jewish and Christian congregations continued to use the auditoriums on weekends throughout the next two decades, the increasingly extreme political assemblies filled the halls during the week.  On May Day 1939 the Federation to Combat Communism and Fascism, Inc. held a demonstration to “protest the infiltration of Communist, Nazi and Fascist propaganda.”  But on the same holiday in 1946 the Socialist Labor Party held its celebrations here.

It reported that “On August 28, 1946, the Upper West Side Civil Rights Congress of New York City held a meeting at the Pythian Temple, 135 West Seventieth Street, which was cosponsored by the Communist Party, West Side; American Labor Party; American Youth for Democracy; United Negro and Allied Veterans of America; and the International Workers Order, Lodge 572.”  The Report cautioned that some of these groups used deceptively patriotic names.

In the first years of the 1950s the Knights of Pythias gave Decca Records the exclusive use of the main auditorium as a recording studio.  Some of the best known names in Rock ‘n Roll would produce their hits here.

Bill Haley and the Comets recorded the albums “Rock Around the Clock” and “Shake, Rattle and Roll” here in 1955; and Johnny Burnette and the Rock ‘n Roll Trio recorded its debut album here the following year.   Buddy Holly’s first recording session in the Pythian Temple studio was on June 19, 1958.  Other hits recorded here were Bobby Darin’s “Early in the Morning” and “Now We’re One,” and Leroy Anderson’s “Sleigh Ride.”

In the meantime the smaller auditorium continued to be used for operas, plays, and meetings.  In April 1956 the People’s Artists staged a “Hootenanny” here and in January 1957 folk singer Pete Seeger held a concert.

One notable event was the meeting of the National Council of the American-Soviet Friendship Association in November that year.  The group had been meeting here for years with little real notice.  But that night, when actor and activist Paul Robeson spoke, the timing was ill-advised.  The Soviets had fired on student demonstrators in Budapest a month earlier, killing one.  It sparked the 1956 Hungarian Revolution and American sympathies.  When the meeting broke up, its members were pelted with eggs, spoiled tomatoes and other projectiles.

In 1957 the New York Institute of Technology purchased the building in foreclosure for $500,000—exactly one-quarter of its construction cost.  A few weeks later, in January, officials explored the structure to map out classrooms, lecture halls and other areas.  What they found was a bit startling and equally creepy.

Meyer Berger reported in The New York Times on January 20, 1958, “Wardrobe lockers still hold Egyptian, scriptural and other ritualistic garb.  There is great store of halberds, ancient staffs and magic wands and rods.

“Under several of the meeting-room altars, which are done in Egyptian, Babylonian or Aztec motifs, the college faculty found coffins filled with grinning skeletons, some done in plastic, some apparently human—the kind of thing used to chill and horrify initiates.” 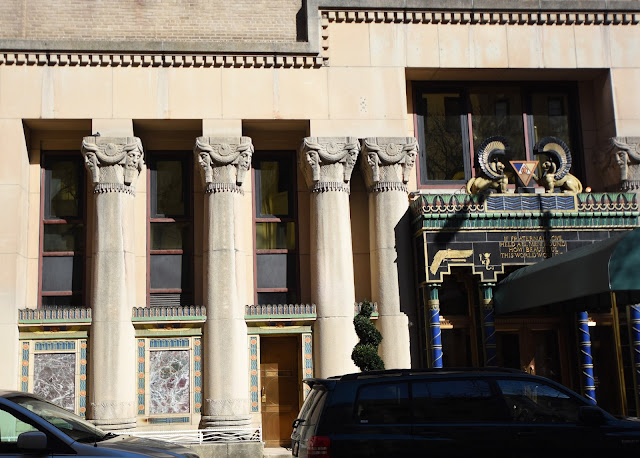 For several days leading up to September 1, 1960 police had received reports of a mysterious cat-sized beast slipping among the buildings on the block.  The phantom animal was considered “imaginary” by officials--until it appeared in the lobby of the New York Institute of Technology that night.

Discovered by an elevator operator, the animal curled into a corner was Timmy, the escaped honey bear owned by 17-year old Robert Engler.   When police arrived a safari of sorts ensued.  Timmy bolted, making his way to a basement restroom; then upstairs to the lobby lavatory.  Police were close on its tail, literally.

Timmy was eventually captured, but not before Detective Walter Bentley was bitten on the wrist.  The prisoner was taken to the West 68th Street police station in a pail and calm was restored to West 70th Street.

In 1983 architect David Gura completed a conversion of the structure into apartments.  He called the project “like dealing with an enormous Rubik cube” because of the myriad spaces.  Windows were carved into the vast brick façade, the major change to the exterior, and 83 different apartment layouts were created.  Some of the resulting duplexes had 16-foot high living rooms. 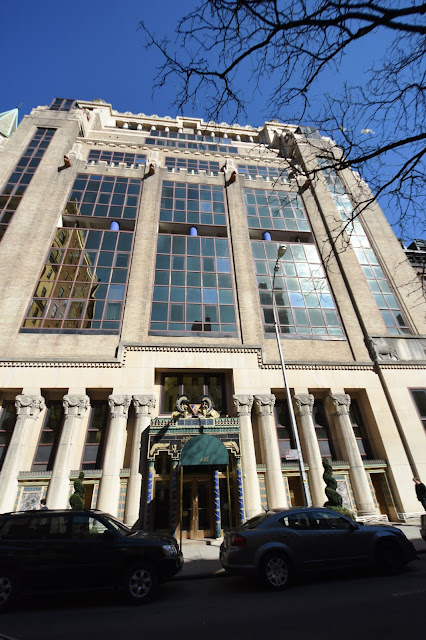 Because of its side street location, the extraordinary building, now called The Pythian, is as overlooked today as it was in 1928.  But its dramatic, brilliant decoration is worth a detour.

non-credited photographs by the author
Posted by Tom Miller at 3:03 AM