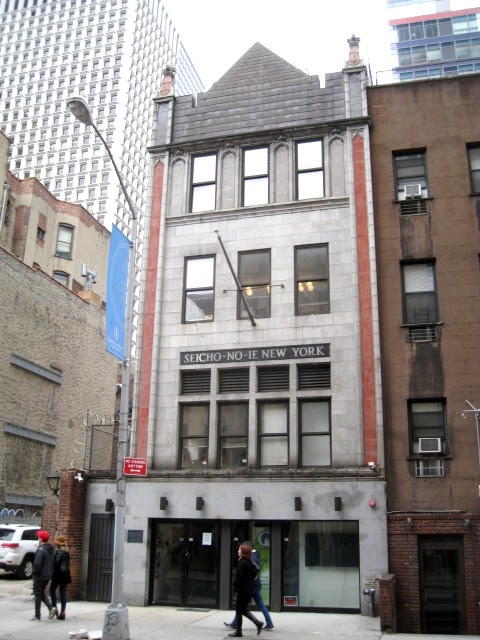 Although the Turtle Bay neighborhood near the East River filled with slaughterhouses, cigar factories and breweries following the Civil War; the block of 53rd Street between Second and Third Avenues boasted handsome brownstone-faced dwellings.  The three story home at No. 247 East 53rd Street was purchased by Frank Schaeffler in 1881.  He paid Jette and Baruch Strauss $12,500 for the 25-foot wide building—nearly $300,000 in today’s dollars.

A real estate developer, Schaeffler remained in the house at least until 1888.  But by now the block had noticeably declined.  Tenements filled with immigrant families lured by the low-paying jobs in the factories and slaughterhouses.

With poverty came crime and vice.  Since the mid-19th century missions and reformers had been hot on the heels of decadence and wantonness.  On March 2, 1918 the Queen Mab Realty Co. announced it had hired architect Frederick P. Hill to remodel the old house at No. 247 “into a club house.”  And then two weeks later the Real Estate Record & Builder's Guide supplied more clues to what was to come.  The journal identified the lessee of the proposed building as the Prescott Memorial.

The Brevoort Mission was incorporated in 1869 by the First Universalist Mission Society of New York City.  When it moved into the completed Prescott Memorial Building in 1919 it changed its name to the Prescott Mission.

Hill had transformed the Italianate brownstone to a terra cotta-fronted institutional building.  Sparsely decorated, it gave tepid nods at neo-Gothic, with blind Gothic arches and crockets at the top floor and rooftop finials.

The goals of the mission were to take the neighborhood boys off the streets where temptations were rampant, and to educate women in nutrition, economics and housekeeping.  In 1921 the Directory of Social and Health Agencies of New York City described the Prescott Memorial as providing “general club work, gymnasium, classes in household economics.”

In January 1922 eyebrows were raised across Manhattan when the Church of the Divine Paternity hired a new minister who would work at the 53rd Street location.  The New York Herald pointed out that Helene Ulrich was “Manhattan’s only woman minister.”

And Helene brought progressive ideas to New York City.   A month and a half after she arrived a Herald reporter questioned her on current topics—and her responses bordered on shocking.   She felt ministers were short-sighted in their blanket denunciation of motion pictures and stage plays.  “I am certainly not in sympathy with attacks upon the stage and its people,” she said.  “I believe absolutely in the stage as one of the greatest possible mediums for widespread good, and I think the present condemnation of it is greatly overdone.”

Regarding flappers—those modern women who donned short dresses and bobbed hair—she brushed off the entire issue.  “As to ‘flappers,’ their virtues or deficiencies, the whole subject is a matter more of talk than of anything else.”

And her work in impoverished neighborhoods as well as her understanding of the plights of the poor was evidenced in her stance on birth control.  “I emphatically believe in it, and I approve of birth control propaganda….I feel this way about it: If there are people, a man and wife both, let us say, who do not want to have children, and do want to have dogs, by all means let them have dogs!”

Helene Ulrich encapsulated her goals at the mission as to bring about an “understanding in my own church between strongly contrasted classes of people, the rich and the poor, for instance, and between the educated and the uneducated.”

By 1927 the Divine Paternity House had instituted the Baby and Child Welfare Clinic in the building.  The work of the clinic was supported by the highest levels of society; and when a benefit bridge party was held in the Plaza Hotel on February 8, 1927 Mrs. Andrew Carnegie was among the wealthy patronesses.

The announcement by the Universalist Church of the Divine Paternity in May 1946 that the 53rd Street building had been sold to a furniture maker shocked and angered nearby residents.  Among its other functions, Prescott House ran a day care facility which allowed mothers to work.  Its loss would be devastating to the low-income neighborhood.

On May 11 The New York Times reported that “Thirty mothers and their children rode in relays in a horse-drawn wagon through midtown streets on the East Side yesterday urging neighbors to sign petitions protesting the proposed sale.”  A sign on the wagon read “Prescott House Must Not Be Sold” and advertised a protest meeting scheduled for the following Friday night.

Richard Wheelright had paid a $10,000 deposit on the $40,000 building on April 18.  But now the unfriendly hoop-la made him wish he hadn’t.  His attorney told reporters that he “wishes to withdraw from the sale and has asked for a refund of the deposit” and that “Mr. Wheelwright does not desire to put an end to the service of the neighborhood house.”

The Universalist Church of the Divine Paternity was, perhaps, less Christian in its response to the frantic mothers.  It refused to release Wheelwright from the signed contract.  But the women forged on and came to an agreement with the furniture maker directly.

Within a week of the protest and strategy meeting of Friday, May 17 around $7,400 had been raised to save Prescott House.   By January 7, 1947 there was enough money to repay Richard Wheelwright his original $10,000 down payment and he accepted long-term payments at low interest for the remaining $30,000.

The New York Times reported “Prescott Memorial Neighborhood House has been saved and now belongs to the community it serves...Under a new executive board it will continue operation of a day nursery attended by seventy children, besides it other work for older children and teen-agers.”

The new owners turned to motion picture and stage stars—the professions that Helene Ulrich had defended a quarter of a century earlier—for support.  Throughout the coming years box office receipts for certain opening night performances went to Prescott House.  Such was the case in 1955 when Katharine Cornell and Tyrone Power opened in The Dark Is Light Enough; and in April 1958 when Alfred Lunt and Lynn Fontanne donated their opening proceeds of The Visit.

As the 20th century drew to a close the Turtle Bay neighborhood had once again changed.  Upscale apartment buildings replaced old brownstones and tenements, and there was little need for the aging mission house.  In 1993 the building was renovated for Seicho-No-Ie, a spiritual group founded in Japan in 1930.  The name means “The Home of Infinite Life, Wisdom and Abundance.” 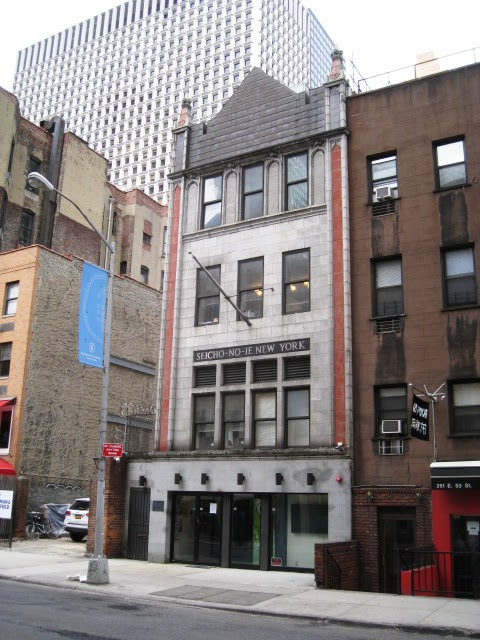 Although the street level was significantly altered; the bulk of the 1993 work was internal.  The upper floors of the former Prescott Memorial Building remain surprisingly intact; looking much as they did in 1919 when mission workers sought to help the neediest of New Yorkers.

photographs by the author
Posted by Tom Miller at 4:00 AM