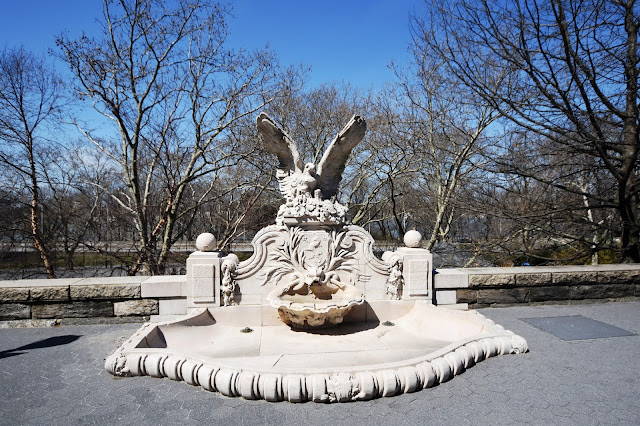 An attorney, Robert had attended both Columbia College and Columbia Law School.  In 1881 he was elected to the New York State Assembly and remained in office until 1889.  Like the rest of his respected family members, he led an untainted life—until his last year in politics.

Hamilton had begun an affair with Evangeline L. Steele in 1886.   Unbeknownst to him, as The Sun later said, she had led “a disreputable life.”  What he also did not know was that she was already married, to “Josh” Mann.  Popularly known as Eva, she recognized the financial opportunity the affair presented and she laid plans to ensnare her lover.


In December 1888 Eva and Josh traveled to Elmira, New York.  The Evening World later reported “They decided that Eva should get a baby, and make Mr. Hamilton believe it was his.  If they succeeded they knew he would not suffer the little innocent to go through life unnamed.”  On December 17 they paid $10 for an unwanted newborn.

Hamilton believed the child was his; but Eva’s demands that he marry her were temporarily halted when the baby became ill and died.  The death certificate listed the child’s name as “Alice Mann, daughter of George and Alice Mann,” and stated the cause of death was “want of breast milk.”  Eva, who had never been pregnant, was unable to nurse the infant and it died of starvation.

Before the baby was buried, according to court testimony later, a replacement baby was purchased (also for $10).  Josh Mann’s mother, “Grandmother” Anna Swinton, moved in with the couple to ensure this one would not die.

“Hamilton knew nothing of the death of the first one, and yielding to the persistence of Eva he married her in Paterson, N. J. on the 7th of January last,” explained The Evening World.  In February Hamilton took an apartment in the Marshall Flats on West 15th Street.  Joshua Mann rented a flat on the same street and when Hamilton was not around, he and Eva lived together as man and wife.  And she provided him with large sums of Hamilton’s money to live on.

Because Hamilton was still serving in the Assembly, he was often out of town.  The New-York Tribune reported “Before she married Hamilton, he agreed to give her $6,000 a year for pin money and to defray her expenses at home.”  A quarrel over that allowance brought an end to the marriage and to Hamilton’s reputation.

On August 26, 1889 the couple was summering in Atlantic City.   Eight months earlier, just after Hamilton learned of the baby, he had hired a nurse, Mary Anne Donnelly, to care for the child.  Donnelly traveled with the family, accompanying them to California earlier that year.

But that morning, after Evangeline repeatedly pressed Hamilton that they should live permanently in Manhattan; he told her that he would reduce her allowance if they did.  “Quick-tempered and passionate, she began to quarrel with him and threatened to leave him forever,” said the New-York Tribune a few days later.   Hamilton refused to budge on the subject.

At one point Mary Anne Donnelly tried to intervene, but she was told to leave the room.  Eva did not like the nurse and already had instructed her husband to fire her.  She demanded that Mary Anne leave the cottage.   When she was unable to move her husband, Eva turned to the whiskey bottle.

At 11:30 a. m. the nurse returned.  Now Eva upbraided her for leaving the child alone, they argued, and Eva fired Mary Anne Donnelly.  Within earshot of Hamilton the nurse took her last shot, denouncing Eva “as a faithless woman.”

A physical confrontation followed, during which Mary Anne proved to be a better street fighter than Eva.  “Mary was as strong as a bull and had the fight lasted much longer Mrs. Hamilton would have been beaten insensible,” reported the Tribune.  Hearing the battle, Hamilton rushed into the room just in time to see Eva thrust a knife into the heart of the nurse.  In trying to break up the fight he was cut in two places.  Mary ran from the room and died on the parlor sofa.

Astonishingly, Evangeline blamed the death on Hamilton.  As she was taken away she said “You know I told you before I left New-York that if you did not discharge that nurse there would be murder committed.”

The scandalous details of the affair came out during the trial.  Newspaper readers nationwide learned of the purchased baby, the other husband, and the plot to get Hamilton to leave his fortune to the baby Beatrice.   His lawyer described him as “outraged and indignant.  When he remembers all he sacrificed for that woman he can hardly restrain himself.”

Eager to escape the scandal, Robert Ray Hamilton went into partnership with John Dudley Sargent, a stage coach driver in the Rocky Mountains who proposed establishing a tourist resort in Yellowstone Park.  Hamilton funded the plan and Sargent acted as the “experience.”  They built a luxurious hotel and lodge on Jackson’s Lake in June 1890.

Three months later Hamilton was dead.  He was found drowned in the Snake River under suspicious circumstances.  He was quickly buried and when investigators from New York later disinterred his body, it was found forced into a too-small wooden crate.  The Sun reported on October 15, 1891, “Strangers found his body, and those who could not appreciate his worth knocked a few rough boards together for a coffin, wrapped the body in a dirty and ragged tarpaulin, loaded it into the box, and so without a tear or a prayer dumped it into a hole on a desolate hillside…A loyal friend, a true gentleman, and a brave man was Robert Ray Hamilton, but hundreds of dogs have been more decently interred by their master than was he by the friends to whom he was loyal.”

Sargent was arrested for his murder, but was later sent to an insane asylum.

Hamilton’s will included the clause “I direct my executors…to expend the sum of ten thousand dollars in the purchase and erection of an ornamental fountain which I give and bequeath to…New York City, provided that such fountain may be erected in one of the streets, squares or public places in said city.”

Scandal and controversy would follow Hamilton even in his death.  His generous bequest was fought by the family.  On April 22, 1891 The New York Times ran the headline “Let Him Be Forgotten,” and explained that the Hamilton and Schuyler families petitioned the City to ignore his wishes.  “Such a memorial as the will designates would, they believe, perpetuate a name that brought dishonor to the family.”

The battle would last for years.  In the meantime Evangeline Mann had been released from prison.  She had received a settlement of $10,000 from Hamilton’s will.  But she died penniless on November 23, 1904 in St. Vincent’s Hospital.  The Evening World reported that “the body was buried in the common plot in Mount Olivet Cemetery, there being but one mourner present.”

The Park Board accepted the design for the fountain, submitted by architects Warren & Wetmore, on December 30, 1903.  Two months earlier it had approved the location—on Riverside Drive at 76th Street.  The architects’ baroque fountain featured a spread-winged eagle above a coat of arms and a shell-shaped basin fed by a dolphin.   Water from the basin spilled into a large pool.  The entire Tennessee marble fountain formed part of the stone wall separating the Drive from Riverside Park.  Along the rim of the pool was the inscription “Bequeathed to the people of New York by Robert Ray Hamilton"

Far beneath the fountain, at the base of the wall on the Park side, was a marble bowl that served as a horse trough for thirsty, passing carriage horses.  In reporting on the installation of the Hamilton Fountain, newspapers said it was “for man and beasts.”

By the second half of the 20th century the horse trough in the park was buried by accumulated soil—a total of 10 to 12 feet deep by the new century.  With the parkside marble bowl long forgotten, the “man and beast” comment resulted in the lavish ornamental fountain on the Drive being termed a “horse trough;” a reputation it still carries.  In fact, Hamilton’s will does not mention the "ornamental fountain" being used by horses, and its positioning makes that improbable.  Carriage drivers would have to direct their horses onto the sidewalk to take a drink.

Throughout the 20th century the marble fountain suffered vandalism and neglect.  The eagle’s beak was smashed off and the inscription was eroded to nearly illegibility.  Riverside Drive residents did their best, planting flowers in the no longer functioning basin.

Then in 2008 the Riverside Park Fund and a small maintenance endowment initiated a $150,000 restoration.  The eagle’s beak was replaced, the stone restored, and the plumbing repaired.  And in November an archeological dig of sorts was undertaken to find the old marble horse trough.  It was successful.  Parks Commissioner Adrian Benepe said, on December 1, “the basin might be excavated and reused elsewhere, perhaps as a dog fountain” or “perhaps it will be amply documented and then simply left in place.  That will allow another parks commissioner in another era to find it again.” 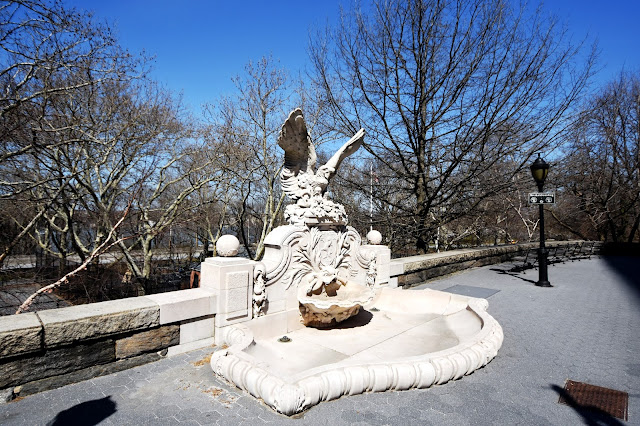 In the meantime, the stunning marble fountain continues to be deemed a horse trough--an ironic similarity to the memory and reputation of its donor.