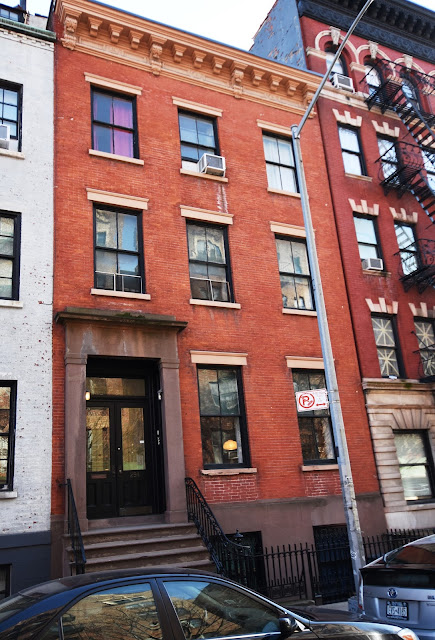 At a time when rows of identical high-stooped rowhouses were being erected in Greenwich Village by speculative developers, the block of West 11th Street, between Hudson and Bleecker Streets bucked the trend.  Each house was erected at different times; and when Samuel and Mary Frost completed their brick-faced home at No. 294 in 1842, it was as individual as every other house on the block.

A commodious three bays wide, the Frost house had little to set it apart from the many Greek Revival homes being constructed at the time.  The entrance was exceptionally understated; but other elements suggested the Frosts’ comfortable station.  Delicate stone lintels graced the openings, the cornice was adorned with foliate-scrolled brackets and panels, and elegant iron stoop railings (only one of which survives) swept down the steps to swirl around a pretty newel.

Frost was highly involved with Village politics and was a long-time member of the Ninth Ward Democratic Whigs.  He sat on the nominating committee in 1850 as candidates for positions like Constable, School Commission and Assemblymen were being considered.  Such situations were taken seriously and things boiled over that fall with splinter “committees” tried to submit nominations.

In a meeting on Monday, October 28 Frost and the other committee members congratulated the Ward’s chairman for not yielding to “the gross and outrageous conduct of a few men in making committees, by means of disorderly mobs of non-residents, boys and Loco-Focos” and by his “refusing to recognize any nominations made by such means.”  (The committee’s derision of the unrecognized committeemen as Loco-focos referred to the Democratic faction called by Ralph Waldo Emerson as “stiff, heady, and rebellious.”)

The Frosts’ well-appointed parlors were the scene of daughter Mary’s wedding on Wednesday evening, October 10, 1855 to William C. Heath.  And four months later, on Wednesday, February 13, their niece, Emily Chapman, was marred to H. O. Rawls of Norfolk, Virginia in the house.

In 1868 Samuel Frost took out a mortgage on a house on West 12th Street from William Bostworth.  Replaced the Frosts in the West 11th Street residence was the family of William Cooper.  Cooper was a real estate operator and owned considerable property in Manhattan, much of it in Greenwich Village.

In the house with him and his wife, Catherine, were three children—William Suckley, Emma Matilda, and John Henry.  They were here only a short time before William Cooper died in January 1870.  Although Emma and John were young adults by now, the entire family remained in the 11th Street house for decades.  Cooper’s will divided his real estate holdings among the family; sometimes in odd parcels.  For instance, on May 8, 1896 The New York Times published an article complaining about the “eyesores on Lower Broadway” and strongly pushed for the removal of “shabby buildings” to make room for modern structures.  Among them were seven 18th century houses facing Bowling Green.  “They were the residences of wealthy families, and they are fair examples of the style of architecture that prevailed when that locality was favored by fashionable folk years ago.”  The article noted that the first in the row was owned by William Cooper, “except a fifth part” that was held by Catherine Cooper.

Catherine Cooper died on October 23, 1907 and her funeral was held on Saturday, three days later.  Before long the Coopers left West 11th Street and their home of four decades became a boarding house.

By 1915 Mrs. Joseph A. Imhof lived here.  She was an editor with Sloan Syndicate, Inc., a firm that marketed short stories to periodicals.  The Editor reported on January 1, 1916 that she was “in the market for short stories of not less than 1,500 words and not over 2,000 words each.”  The author was paid for each publication that used the piece “in accordance with the size of the city.”  The Editor seemed to caution writers not to get their hopes too elevated.  It said that Josephine “will guarantee the writer a small and reasonable amount.”

Greenwich Village was the epicenter of Manhattan’s artistic community and by 1917 artist Howard P. Heath was boarding in the house.  A member of the Society of Independent Artists, he annually exhibited in its art shows.   He remained in here well into the 1920s; but moved on by the Great Depression when he became a WPA artist and traveled extensively.

In the meantime Thomas Victor Hall had been making a living by illustrating stories in newspaper and magazines with pen-and-ink drawings.   By 1915 he was getting more advanced work, with his full-color illustrations appearing in periodicals like Life Magazine.

While in Paris in 1923 he married artist Josephine Helen Andre Maxine.  They arrived back in New York City on April 4.  Two years later they moved into rooms at No. 294 West 11th Street.  The couple would work and live here until 1930; during which time T. Victor Hall made a name for himself as an illustrator of pulp fiction.

At the same time American modern painter Milton Avery and his wife, illustrator Sally Michel Avery, lived on the top floor.  The couple married in 1926 and Sally worked as a freelance illustrator so Michael could devote all his time to painting.  The couple had a daughter, March Avery, in 1932.

In 1929 The Phillips Collection in Washington DC became the first museum to purchase an Avery painting, and in 1944 it gave him a one-man exhibition.  Art critic Hilton Kramer said of him “He was, without question, our greatest colorist.”

When Avery died in 1965 Sally donated his personal papers to the Smithsonian’s Archives of American Art.  She remained in the house, continuing her artistic career.

In 1981 she exhibited in her only solo show in New York at the Waverly Gallery.  In 1987 a retrospective of her work was held at the University of Iowa Museum of art; and another at the Fresno Art Museum in 1990.  Often overshadowed by her illustrious husband, Sally’s art now hangs in the permanent collections of the Metropolitan Museum of Art, the Corcoran Gallery of Art, the Israel Museum and several other well-known museums.  On January 9, 2003 Sally Michel Avery died at the age of 100. 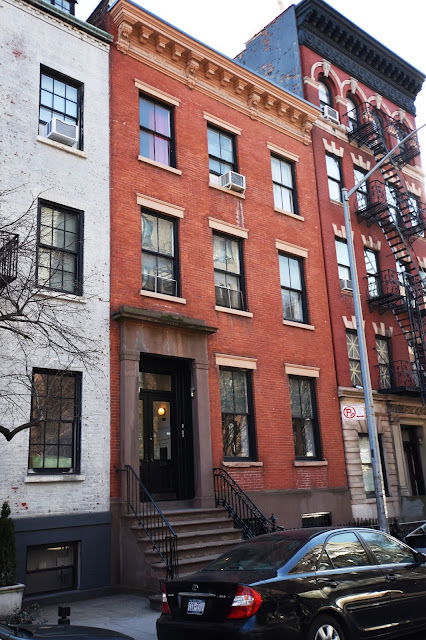 While the neighborhood around Samuel Frost’s home is much-changed since 1842, the house remained outwardly little altered.  Within its rooms artists created a wide range of memorable works for nearly a century.