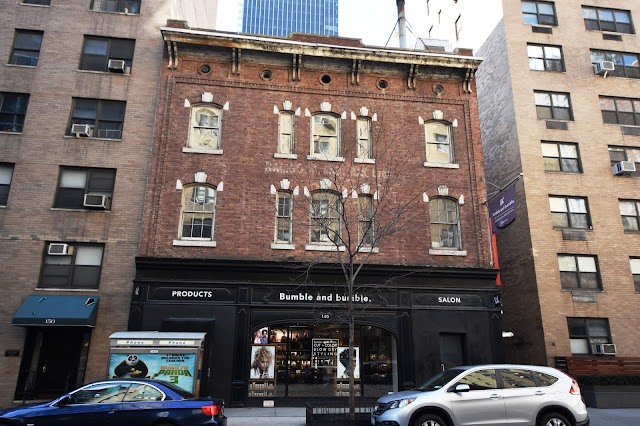 By the turn of the last century the once-residential block of East 56th Street, between Third and Lexington Avenues, had been greatly overtaken by business.  The ground floor of three story brownstone house at No. 148 was home to the Pleasure Palace Cycle Co. in 1901.  The two employees in the storefront business did bicycle repairing.

A year later, Harriet D. Freohlich sold Nos. 146 and 148 to developer David H. Taylor.  But it would seem that Taylor did not have the funds necessary to carry out his ambitious project for the site.  On June 11, 1903 he sold the property to Genevieve S. Page for $28,500; and two days later she gave him a loan “to erect a building,” according to the Real Estate Record & Builders’ Guide.

It would be another two years before Taylor would move on the venture.  Early in 1905 he commissioned architect Charles A. Gifford to design a “three-story private stable.”   Gifford’s plans called for “Steam heat, brick and stone, slag roof, blue and limestone coping, galvanized iron cornices, wire glass skylights, steel frame, etc.”  He placed the projected total cost at $40,000—about $1.1 million today.

In 1905 the automobile was making noticeable advances and the construction of a private stable was, perhaps, a bit short-sighted.  As it turned out, the finished building would never see a horse.

The new building became home to the New York School of Automobile Engineers in December 1905.  At the time only the wealthy could afford an automobile; and the school endeavored to instruct coachmen on the operation of the machines.  On June 14, 1906 that year The New York Times wrote “How completely the automobile has entered the realm of the horse-drawn vehicle is shown by the increasing number of coachmen and grooms now studying to be chauffeurs.”

The newspaper pointed out that just before heading to Europe, Anna Sands sent her groom to the school.  “She will not sacrifice her horses entirely, but it is her intention to do more automobiling in the future.”  Miss Sands was not alone in educating her employee.  In the class with her groom were the coachmen of millionaires Henry M. Flagler, Albert C. Bostwick, and president of the Erie Railroad, Frederick D. Underwood.  Tycoons from other cities, like R. B. Mellen of Pittsburgh, sent their coachmen.

The men, accustomed to wearing livery and driving elegant carriages, would leave East 56th Street with a new title: chauffeur.

The New York School of Automobile Engineers instructed its students on mechanics, with special focus on the fundamentals of the gasoline engine, on traffic laws (of which there were few), and on safe driving.  M. S. Gilmer, head of the school, said in April 1909 “It is of paramount importance that a careful, cool-headed, sober man be at the wheel.”

Gilmer’s greatest complaint was that anyone could drive a car so long as he paid the State of New York the $2 fee.  There were no driving test, no age limits, nor physical examination.  He lashed out at the system saying “This law still stands, and the number of incompetent chauffeurs now doing duty is due to this farcical system of adding to the revenue of the State without in return giving protection to the public.”  He insisted that before a chauffeur were allowed to drive, he should have to prove his “ability to control the car, to drive through traffic on wet asphalt, to make quick stops, and, in general, to handle it in such a manner that the safety of the other users of the road is not endangered.”

In short, he thought that everyone driving a car should attend classes such as his.

As the years passed and the automobile grew in popularity, the school marketed itself more as a trade school.  In addition to training already-employed coachmen, it hawked the great opportunity that driving as a profession presented.   On January 15, 1910 young men crowded into the lecture hall in the New York School of Automobile Engineers to hear William J. Foster speak on “Automobiling as a Profession.”

He remarked that there was no business “in which the opportunities for future advancement and success will be greater to energetic and capable young men that there are and will be in the automobile business.”

In October 1913 the New York School of Automobile Engineers was absorbed by the Y. M. C. A.  The Horseless Age announced that “The entire equipment has been moved to the Y. M. C. A. school.”  Within the month the New York branch of the Chicago-based Stromberg Motor Devices Co. moved into the 56th Street building.

In 1922 the structure came as near as it would to its original purpose when millionaire Edwin Gould converted it to his “private garage.”  The ground floor housed his vehicles, the second floor became “chauffeurs’ quarters,” and the third floor contained “recreation and dressing rooms,” according to submitted plans.

Gould died in 1933; but before then he had give up the 56th Street property.  Around 1930 it had been secretly converted to a speakeasy—the Merry-Go-Round club—by Austrian-born architect Joseph Urban.  Well-known for designing the lavish sets for the Metropolitan Opera and the Ziegfeld Follies, he did not disappoint with his design for the Merry-Go-Round.

The round bar sat on a mechanized turntable and the barstools took the shape of carousel horses.  According to William Grimes in his Straight Up or On the Rocks, patrons “took a little trip as the bar completed a circle every eleven minutes.”

The arcane nightspot sat squarely amid what Prohibition officials called the “speakeasy Fifties.”  In the neighborhood were upscale nightspots like the Stork Club, the Mona Lisa, and the Casa Bella.  Women dripping in jewels and tuxedo-wearing men, including the flamboyant Mayor Jimmy Walker, drank in swanky surroundings.

The end of the line for the bar came on the night of February 17, 1933 when, according to The New York Times the following day, a group “of Federal agents raided the Merry-Go-Round, on the second floor of 146 East Fifty-sixth Street.”  There were 25 patrons in the bar at the time and agents seized 300 bottles of liquor and arrested the staff.

The second floor was locked, while the Beekman Galleries operated on street level.  The auction gallery offered rare books, artwork and valuable furniture.  But on December 20, 1933 a most unusual auction took place.

The Times reported “Instead of the works of art that customarily come under the hammer in New York’s galleries, there were offered pedigreed dogs, eighty-three of which were knocked down for a total of $3,234.50, the average per head being $39.”  It was the first such auction on the East Coast and New Yorkers responded in the hundreds.  The newspaper noted “At 2 o’clock, the hour advertised for the sale, the galleries were packed and it was impossible to get inside the doors.  Motor cars were constantly arriving and adding scores more to the crowd, which remained about the doors despite the downpour”

On December 5, 1933, ten months after the Merry-Go-Round was raided, the 21st Amendment to the Constitution was ratified, ending Prohibition.   A year later the second floor of No. 148 East 56th Street was opened again.  On Thursday night, December 20, 1934 the Reno Merry Go Round “a new dinner and supper club” was opened with a benefit event.

In 1938 the building was renovated again.  This time architect Robert Teichman altered the first floor as an automobile showroom and gutted the old Merry Go Round Club for “temporary church use.”  Whatever church made use of the space, it was indeed temporary.  On February 25, 1939 the Club Show Stop opened here.  The experimental cooperative venture was formed to audition and present “talented artists, actors and musicians.”

The short-lived theater-club staged revues, plays and musicals; but was replaced by Jacques Bustanoby’s upscale Café des Gourmets, which engulfed the first and second floors, in 1940.  Bustanoby, along with his brothers, Andre and Louis, had been well-known in New York since 1901 when they opened the Café des Beaux Arts.

On April 10, 1940 George Tucker, in his syndicated “Man About Manhattan” column reminded readers nation-wide “Bustanoby’s Café des Beaux Arts, on 40th Street at 6th avenue, introduced dinner dancing in New York, and it was there that Jim Brady’s celebrated dinner for Lillian Russell was given, at $100 a plate.  At that dinner were Count Von Bernstorff, the German Ambassador, David Warfield, Mary Garden, Otto H. Kahn, and the gorgeous Anna Held, whom Ziegfeld has just brought over from Paris.  Mlle. Held was the first woman to enter Bustanoby’s new women’s bar, a sensational innovation then.”

Tucker’s purpose in recalling the old restaurant was to mention that Jacques, “one of the great restaurateurs of an older, mellower and perhaps more genteel time,” was opening his new restaurant. “Perhaps by the time this reaches you the Café des Gourmets, in 56th street, will have opened its doors with Jacques Bustanoby at the door to greet you.  There will be no Anna Helds, Richard Harding Davises, Jim Bradys, or Dana Gibsons to sit around the tables and spin airy brocades of fancy, but the Bustanoby manner will be in evidence, and that is all that ever mattered anyway.”

The swanky restaurant did not last long, however.  Before Jacques Bustanoby’s death on March 23, 1942, it had been shut down.  For more than a decade the Swann Auction Galleries occupied the space; then in 1954 the first floor became a furniture store, the second continued as an auction gallery, and the third floor home to a photographic studio.

For years, starting in 1961, the first and second floors No. 148 East 56th Street were leased by Forum Floors, Inc.  The lease was taken over in 1976 by International Printworks, fabric manufacturers.  Its street level store was called Fabrications.

When the hair salon Studio International took over the former photographic studio on the third floor in 1976, it made history of sorts.  Women of color had always gone to all-black beauty parlors where their hair was treated with chemicals, heat and styling products to mimic white hair.  And those salons were certainly not located in fashionable Midtown Manhattan.

Studio International was a “cooperative of black and white stylists.”  The civil rights movement had inspired a cultural movement, “black is beautiful,” which encouraged black women to embrace their heritage and wear their hair natural.  Studio International’s three black stylists specialized in Afros, braiding and other current styles.

In 1988 The New York Times announced that another hair salon, Bumble & Bumble, had opened in the building.  The stylists offered “makeovers” that involved two sessions for the then pricey $150.  The salon remains in the space two decades later. 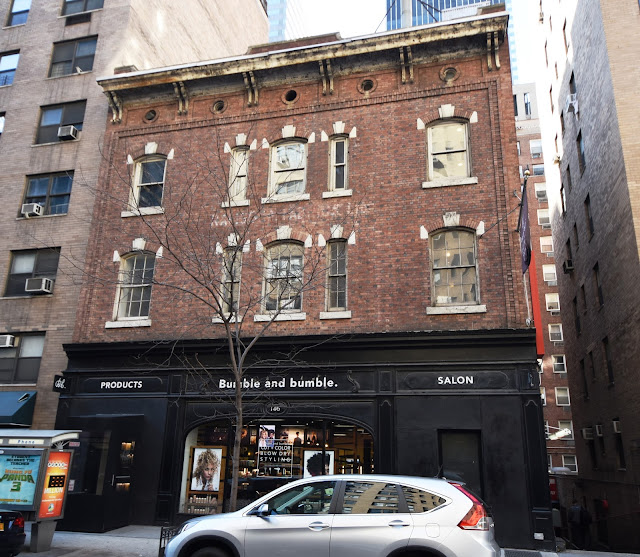 Charles Gifford’s handsome brick stable building is hidden away among apartment and office buildings; a remarkable relic with an equally remarkable history.