Quintessentially Victorian, the James Fountain in Union Square is not just a charming relic of a bygone era, it was an generous attempt by Daniel Willis James to reform the locals.

James was born in Liverpool, England in 1832, the grandson of Anson Greene Phelps of Phelps, Dodge, and Company.  Immigrating to Baltimore and finally to New York, James amassed a fortune not only by heading up his grandfather's company but by obtaining seats on the boards of major American firms like The Ansonia Clock Company, The Northern Pacific Railway and several mining companies in the west.

With his cousin, William E. Dodge, Jr., he transformed Phelps, Dodge, and Company from a comfortable business to one of the world's largest mining companies, making himself one of the wealthiest men in the country in the process.  In the meantime, his cousin became the president of The National Temperance Society, a post his father had also held.  Dodge's strict anti-alcohol convictions made an impression on Daniel W. James.

In the period following the Civil War, temperance sentiment blamed many of the evils of society on demon alcohol.  Marital strife, financial problems, sickness and immorality could be traced back to drink.  Pure drinking water, it was believed, could save the afflicted from the lure of alcohol.  A poem circulated by The National Temperance Society promised:


You may boast of your brandy
and wine as you please,
gin, cider and the rest,

Cold water transcends them
in all degrees.
It, is good, --it is better,
--'tis best.

James was already highly involved with philanthropies around the city, including The Children's Aid Society which he headed, and the Metropolitan Museum of Art and the new American Museum of Natural History.  He now turned his focus to a new fountain.

James contacted the German sculptor Karl Adolph Donndorf and laid out his vision.  The temperance fountain should foster an awareness of charity and giving, all the while imparting the purifying properties of water.  Donndorf did not disappoint.

Daniel James boarded a steamship headed for Germany when word came that a model of the fountain was ready for inspection.  The artist had used his wife as the model for the central figure and his two children for the others. Charity, holds an infant in one arm and pours cool, clear water from a ewer held in the other.  A toddler helps her mother with the task. 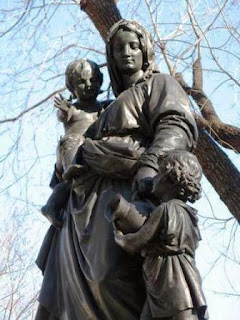 James approved the prototype and Donndorf received the commission.  The fountain arrived in New York in 1881 and was dedicated in October of that year.  The granite for the stepped base was imported from Sweden.  Below the bronze grouping, water spewed from lion's heads on each of the four sides into basins.  Tin cups hung on chains for the use of thirsty park goers.

Approximately one thousand people were in Union Square that day for the unveiling, after which lines formed to partake of the refreshing waters.  And, just perhaps, a few of them did without a drink of gin!
Posted by Tom Miller at 3:09 AM