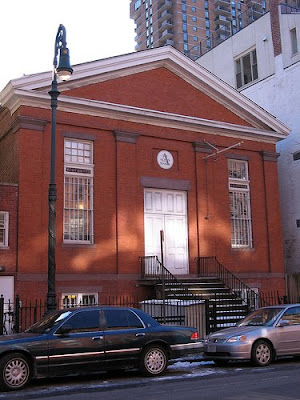 While Manhattan was slowly growing far to the south in the early days of the 19th Century, Robert B. Norton tended his farm on the west side of the island in the gently rolling hills would become midtown.  In 1848, after his death, his children would begin dividing the property and selling lots.

By that time grand homes and churches were being built by the wealthy on Fifth Avenue and Madison Avenue as far north as the 30s and 40s.  To the west, however, the poorer working class families were establishing themselves in less desirable areas -- areas such as Norton's former farm.  Here close to the river, slaughterhouses, breweries and stables cropped up.  Lower and middle class families moved into the brick tenements and affordable rowhouses that soon lined the new streets.

In this working class neighborhood The Seventh Associate Presbyterian Church was founded in 1855.  A small group, in 1857 they had only fifty-five members although that number jumped to eighty-nine by the end of the following year.  The congregation purchased two lots of Robert Norton's old farm on the south side of West 44th Street in January 1858 for their permanent building.

Although the fashion in ecclesiastic architecture had, by now, turned to Gothic Revival, the trustees opted for the more conservative and trusted Greek Revival style and, apparently, hired the services of a self-employed contractor/architect who scrutinized the popular design books of the day.  The resulting building, in a vernacular style sometimes called "Bricklayer Greek," is plain and unassuming.  Four shallow brick pilasters with brownstone capitals project slightly, evenly dividing the facade into three bays which are capped by a classic pediment.  The sanctuary with its double wooden doors sits above street level.

Although in 1900 membership had climbed to 225, as the 20th Century progressed there were fewer and fewer members.  Finally, in 1944 the church was dissolved.  In the 86 years since its construction very little about The Seventh Associate Presbyterian Church had changed; although the original enclosed portico that sheltered congregants from the elements had been, at some point, removed.

Immediately the building rapidly changed hands. The bank foreclosed on the property and it was leased in 1945 to the American Theatre Wing, Inc. as an acting school under Antoinette Perry.  It was sold again in 1951 to the National Amputation Foundation, to be used as a trade school for the disabled.

Four years later in 1955, the old church building began its most celebrated life as the home of the Actor's Studio.  It was here that artistic director Lee Strasberg guided students in the Method technique of acting.  They were taught to draw from their own personal experiences in order to realistically depict their characters.

The Studio had been founded by Elia Kazan not only to preserve this exciting new acting, but to provide a sanctuary where the professional actor could escape from outside pressures such as rehearsals and castings, and hone his talents.  To this end membership was earned through auditioning; the criteria for acceptance were simply talent and the possibility of improvement.

To a selected number of theatre professionals life memberships are offered with no tuition or other fees.

The Actor's Studio remains the preeminent American acting school and, with only minor exterior changes, the Seventh Associate Presbyterian Church still looks much as it did in 1858 -- an rare surviving example of the vernacular Greek Revival style in Manhattan.
Posted by Tom Miller at 5:10 AM