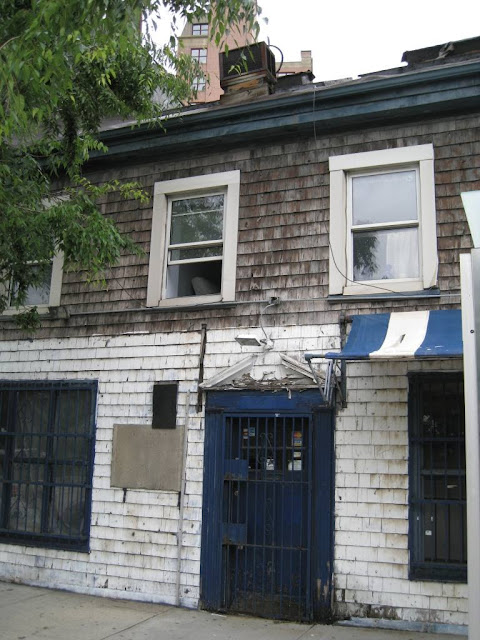 The sagging little building at 392-393 West Street has one of the most deeply varied and checkered histories in New York.

In 1796 the Newgate State Prison opened along the river in the small, rural village of Greenwich.  It was a grand building, designed by Joseph-Francois Mangin, architect of New York City Hall.  During the day inmates in the great Georgian-style prison were taught to manufacture shoes, spinning wheels, nails and other household goods that could be sold for revenue.  At night they attended classes in Latin, mathmatics and reading.

By 1825, however, the prison was losing money and an inspector noted conditions filthier than any he had ever seen outside of the notorious Washington DC city jail.  A state legislature sent a commission who reported insolence and idleness among the inmates.  A new prison was authorized to be built in Ossining, New York and by 1829 the State abandoned Newgate.

The City planned a market on the site.  Greenwich Market would cover the block created by West Street, Christopher Street, Amos Street (now called West 10th Street) and the new, block-long Weehawken Street.  The market was completed in 1834 and consisted of wooden, open shed constructions with deep overhanging eaves to shelter farm and fish wagons that would back up to the buildings. 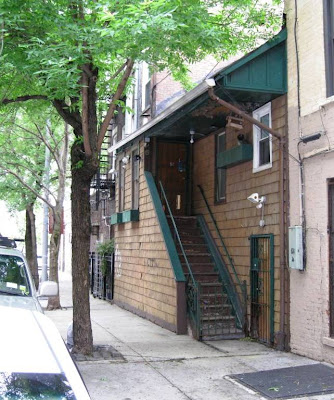 Partly because of the more convenient Jefferson Market, the Greenwich Market was never successful.  In 1848 the City closed the market and authorized its demolition.  George Munson jumped at the opportunity and purchased two sections, Nos.392-393 West Street for $1,550.  A boatbuilder by trade, he enclosed the structure and renovated it as a business, adding a second floor with a rear outside staircase and entrance on Weehawken Street.

Robert Little and his wife Rosanna leased the building from Munson, living on the second floor and running a tavern below that served "stout and malt liquors" to the sailors and working men along the riverfront.  It is the earliest documented saloon business in the area.  Conveniently for the Littles, Nash, Beadleston & Co. had started a brewery in part of the old prison in 1845. 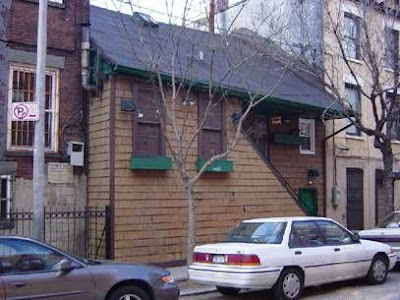 Munson lost 392-393 West Street to foreclosure in 1864, and it was purchased by Edmund Terry, a Brooklyn lawyer.  Terry continued to lease it to the Littles for another three years.  In the years after the Civil War, additional taverns appeared along West Street.  James A. Mulqueen, who operated the tavern from 1883 to 1907 fought the competition by adding a pool table.

The riverfront neighborhood was, at best, seedy.  The New York Police Department described the area around Mulqueen's tavern in 1902.  "It has at night been the resort of outcasts, drunkards, dissolute people, and a dangerous class of depredators and petty highwaymen. ... Protection from these evildoers has been chiefly asked by seafaring people whose craft are moored to the docks along the North River front, and ... by the officers and men of the ships of the White Star, Cunard, Leyland, and Transatlantic Lines, and also by dock watchmen and patrons of the ferry lines."

William (Billy) F. Gillespie took over the lease for the saloon in 1909 until Prohibition closed him down in 1920.  Bouncing back, he opened Billie's Original Clam Broth House which remained highly popular until 1925.  During the same time, the West Village neighborhood changed from "the resort of outcasts, drunkards and depredators" to a highly desireable residential enclave.

Yet the little, block-long Weehawken Street managed to retain its charm.  In 1934 The Villager called it "the almost forgotten thoroughfare" and "still picturesque."

The Terry family sold 392-393 West Street in 1943 to George Hunt, a retired mariner.  After a two-year renovation, Hunt moved in.  He told The Villager in 1945 that he "bought it cheap... but I fixed it all up inside, reinforced it and everything."  From here he sold items needed by the dockworkers and shipworkers such as canvas gloves, work clothes, and tobacco.  He owned the building only until 1946.

As the neighborhood continued to change and the waterfront traffic ceased, 392-393 West Street changed too.  From the 1970s through 1999 it housed gay bars and then a pornographic video store.  Then in 2006 it was purchased for $2.2 million by Jean-Louis Bourgeois, described by The New York Times as "an architectural historian, advocate for environmental rights and 21st-century hipster." 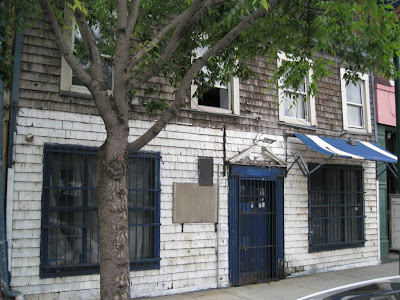 Bourgeois purchased the building with the intention of living upstairs and installing a "museum to water" in the old tavern.  That, to date, has not come to pass.  His building, though, is an rare and amazing surviving example of early 19th Century market shed construction.

photographs by the author
Posted by Tom Miller at 11:45 AM