Perhaps no single site in the United States has seen so many formative events in early American history as that where Federal Hall National Memorial now sits.  In 1699 construction began on the third of New York's City Halls, completed the following year.  Here the beginning of America's venerated freedom of the press took root when, in 1735, John Peter Zengel was tried and acquited of libel against the Crown.  And it was here in 1765 that the Stamp Act Congress met, starting the movement against taxation without representation.  It became the first Capitol Building after the Revolution, saw the first meeting of the United States Congress, and it was here that President George Washington was inaugurated.

Although the building, now called Federal Hall, had been richly refurbished by Pierre Charles L'Enfant, designer of Washington DC, it was abandoned when the Government moved to Philadelphia in 1790.  In 1812 it was razed and the polished marble mantles, crimson draperies and other remnants sold for $425 in scrap.

When, 24 years later, a Customs House -- the first in the country -- was deemed necessary, partner architects Alexander Jackson Davis and Ithiel Town were called in.  They had earned a reputation designing villas and other buildings in various revival styles and for this commission chose restrained Greek Revival.  Started in 1836 and completed in 1842, the Greek temple design connoted the democratic ideals of the young nation.  The interior, designed by John Frazee, drew its inspiration from the Pantheon and the economic power of the Roman Empire.


Before the end of the century it was also being used as The New York Sub-Treasury Building with gold and silver stored below street level in vaults.  Here the Independent Treasury System was initiated in 1862 and in 1913 the Federal Reserve System was born.  In 1907 the new US Customs House at the foot of Broadway, covering three city blocks, was completed and the Customs business left the Wall Street structure. 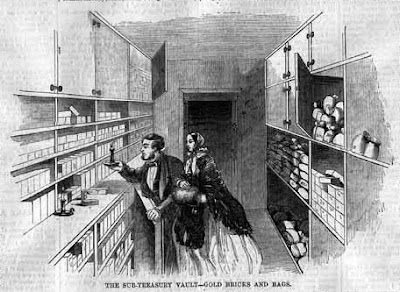 On December 6, 1920 the building ceased its functions as a Sub-Treasury; although the name remained.  For a few years it was used by the Mint and Assay Offices and The Federal Reserve Bank.  On its last day as the Sub-Treasury The New York Times wrote "History is deep there. The Subtreasury Building richly deserves to be made a public monument."

Nineteen years later The New York Times got its wish.  The building was declared a National Historic Shrine by the Secretary of the Interior in 1939 and in 1955 Congress renamed it Federal Hall National Memorial.

But troubles for the building lay in store.  Structural problems became apparent after 2000.  Constant vibration of passing cars and trucks and the subway underneath caused the ground on which the building sits to continue to shift and settle.  Small cracks which had begun appearing in the masonry suddenly widened alarmingly after September 11, 2001.  Apparently the impact of the imploding World Trade Center buildings exacerbated the problem.

The National Parks Service brought in architectural and engineering firm Einhorn Yaffee Prescott who, working with Langan Engineering and Environmental Services used ground penetrating radar to investigate the problem.  What they found was shocking.

In some areas there was a full two feet of empty space between the foundation and the soil below.  Those parts of the building were suspended in air.  The venerable Greek temple was in serious danger.

A $16 million rehabilitation was initiated that included driving four steel pilings 60 feet down into the bedrock and further stabilization using mini-caissons of a concrete-like substance injected into pre-drilled cavities.

Today Federal Hall National Memorial is as beautiful architecturally as it is significant historically.  A century and a half after being built, it is considered one of the finest examples of classic architecture in the United States.  It is opened to the public five days a week with free admission.

LaptrinhX.com has no authorization to reuse the content of this blog
Posted by Tom Miller at 5:11 AM