Sometimes the sorrow associated with the loss of a magnificent structure is equaled by the despair over what replaces it.  Such is the case at the 23rd Street and Eighth Avenue.

By the 1830's Clement Clarke Moore had begun parceling off his estate, Chelsea.  Just after the end of the Civil War, Samuel Pike purchased the leases to the land at the northwest corner of Eighth Avenue and 23rd Street with the intention of establishing a fine opera house similar to the one he had built in Cincinnati a decade earlier.  In 1868 his dream was realized with the opening of Pike's Opera House.  A lavish five story marble structure adorned with statues of Comedy and Tragedy, it cost a staggering $1 million.  While there was seating for 1800, nearly twice that many would cram in for particularly popular productions.

Pike's choice of location was well calculated--but too soon.  The city was expanding northward and The Academy of Music, the favorite of New York's upper class and memorialized in Edith Wharton's The Age of Innocence, sat far south on 14th Street.

Samuel Pike anticipated the potential of his site.  In 1865 the 5th Avenue Opera House had opened at Fifth Avenue and 24th Street; and a few years after Pike's Opera House opened, 23rd Street would be dotted with theatres including Booth's Theatre (owned by actor Edwin Booth) at 6th Avenue, Bryant's Opera House, also at 6th Avenue, and Proctor's Theatre.  His speculation, however, was nevertheless a few years too early.


Although he presented the best opera of the day, opening with La Traviata, Pike was unable to lure New York society from the hallowed Academy of Music.  Within his first year he closed the house.
Two decidedly non-operatic types purchased the building from Pike in 1869, spending another $1 million to renovate the one-year-old structure.  Jay Gould and Jim Fisk renamed it The Grand Opera House and established the lavish offices of the Erie Railway on the upper floors, while slightly changing the entertainment offered below.  They immediately added operetta, debuting Offenbach's La Perichole on opening night in January. 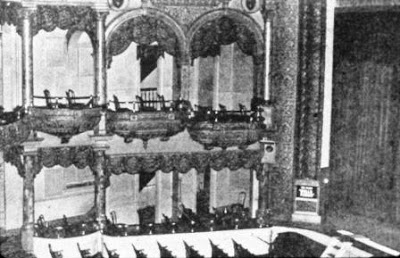 Despite his vast wealth, Fisk was reviled by New York society as uncouth, vulgar and immoral.  He added to his reputation by establishing his mistress, Josie Mansfield, in the 23rd Street house abutting the Opera House and reportedly having a connecting passageway installed.

When Fisk and Gould precipitated "Black Friday" in October of that year with their botched attempt to corner the gold market, Fisk barricaded himself in his offices here.  It was also in those offices that Fisk met his end when his business partner, Edward S. Stokes, shot him.  (This all had to do with an ugly turn of events involving Josie Mansfield.)  Fisk's body was laid in state and his majestic funeral conducted in the grand lobby.

Despite its imposing building, The Grand Opera House was never able to turn a profit.  Although it was the only theatre in New York to pass the fire safety inspections of 1876, it was a theatrical "Jonah."  That same year, new management lowered admission prices and changed the entertainment again, now producing popular stage plays like Uncle Tom's Cabin.  On September 14, 1880 The New York Times reviewed the new play The New Magdalen and its star, Miss Ada Cavendish "who has only recently returned from Europe."

Mercy Merrick shamed, hunted down and betrayed before the man she loves becomes, in her hands, a deeply interesting anomaly; and her cry of rage and passion is a cry that rings long in one's ears. Those who have not yet seen Miss Cavendish in Mr. Collin's drama should improve this opportunity, for "The New Magalen" will be kept upon the stage only during the present week.

While never a truly successful theatre, The Grand Opera House survived intact until 1938 when the RKO Theatres took it over and commissioned Thomas Lamb Associates to remodel it as a modern motion picture theatre.  Much of the ornamentation on the facade was stripped off, the colonnaded street level was broken into small retail shops and a marquee was added over the Eighth Avenue entrance.


RKO ran the theater for 22 years, finally closing it for demolition on June 15, 1960, when the Ladies' Garment Union began razing several blocks to make way for the Penn South apartments for union members and their families.  Exactly two weeks later, on June 29, Samuel Pike's magnificent opera house was gutted by fire.

Within three years a new structure appeared.  Today a bland yellow brick three-story office building sits back from its one-story commercial adjunct on Eighth Avenue.  Glaring neon hocks barbeque and donuts where once Puccinni was performed.  Pike's theatre, which cost $1 million in 1868, has been replaced with a low budget eyesore. 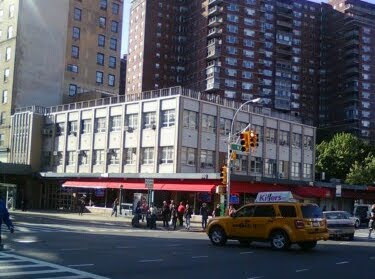