Rafael Guastavino's tiled arch construction was not a new idea in 1900; actually it had been used in Europe since ancient times.  He simply rediscovered and improved it, yet earning himself a powerful reputation in doing so.

Guastavino, born in Valencia, Spain and trained as an architect in Barcelona, immigrated to the U.S. after he earned a medal of merit at the Philadephila Centennial Exposition in 1876.  He founded the Guastavino Fireproof Construction Company and marketed his tiled arch construction as the "Guastavino Tile Arch System."

His construction designs fit well with the popular Arts and Crafts movement of the period.  Interlocking terra cotta tiles were installed in layers of mortar which enabled him to create strong arches with no visible means of support.  Although the clay tiles were, individually, fragile; together they were incredibly strong -- often compared to the inherent strength of an eggshell.

While Guastavino was perfecting his tile construction, New York City was planning a subway system.  Not only could the 19th Century elevated trains no longer efficiently move the multitudes of New Yorkers, they spewed ashes and soot and were noisy.  Through the Rapid Transit Act of 1894 the State had authorized the city to build and run a subway.  Six years later things got underway with the formation of the Interborough Rapid Transit Company.

At what would become the City Hall Station, Mayor Robert Van Wyck put foot to silver shovel and formally initiated construction on the subway system.   Architects George Lewis Heins and Christopher Grant LaFarge were commissioned to design the stations which were functional, white-tiled, nearly-claustrophibic spaces with individual mosaic themes or, in some cases, ornate tiles proclaiming the stations.

Except for City Hall Station.

The new mayor, George B. McCllellon, was explicit.  He wanted it to be a showplace.  "My station under City Hall," he insisted, "will be more beautiful than the rest."  Calling on Rafael Guastavino, Heins and LaFarge incorporated his graceful soaring tiled arches, creating a vast, elegant station.  Twelve brass chandeliers illuminated the earthy ochre, green and black Arts and Crafts tiles.  Nine stunningly ornate leaded glass skylights pierced the ceiling of every fourth bay.  On the opposite wall from the platform large bronze plaques honored the architects, the engineers and the politicians responsible. 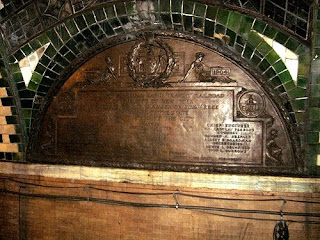 As the system was being readied for opening, the Interborough Rapid Transit described the station.  "It might readily have been supposed that the limited space and comparative uniformity of the underground stations would afford but little opportunity for architectural and decorative effects.  The result has shown the fallacy of such a supposition."

At 1:00 on October 27, 1904 ceremonies marked the opening of the New York City Subway at the City Hall Station.  After customary speeches, Mayor McClellan personally turned the silver key and acted as  motorman, transporting the dignataries far uptown to the 137th Street Station.  At 7:00 that evening, paying passengers (admission was by five-cent ticket) were admitted. 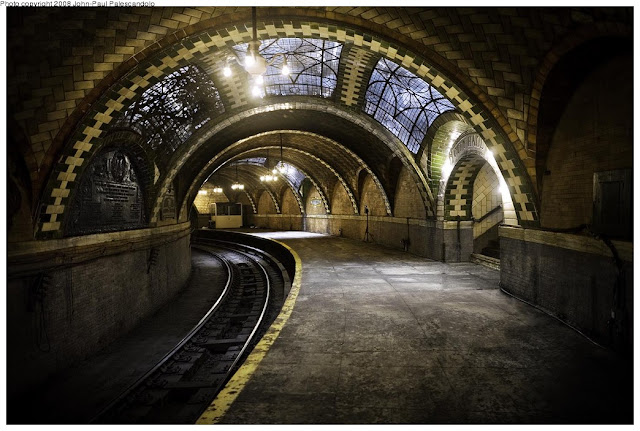 According to The New York Times that day, "The rush for tickets to the opening continued unabated yesterday, and scores of demands had to be refused, with the result that the applicants went away declaring they had been slighted."  More than 7,100 paying passengers entered the City Hall Station that evening; a fraction of the system-wide horde of New Yorkers eager to ride the new system.

The City Hall Station was unusual in that, because it was situated at the beginning of the loop where trains would swing around to head back north, its platform was tightly curved.  Eventually lack of use and this design element would doom the station.


During World War II the beautiful skylights were blacked out for security purposes, eventually becoming covered over.  Then, because the nearby Brooklyn Bridge Stop was more convenient, fewer and fewer passengers were using the elegant station.  In 1945 the Transit Authority shut down the City Hall Station, demolishing the ornamental kiosks and sealing the entrances under concrete slabs.  The tiled arches and brass chandeliers were thrust into tomb-like darkness and the station was essentially forgotten.
Any hope that the City Hall stop would be resurrected was smashed when modern train cars became too long for the sharp curve of the platform.  The wide gaps created between the platform and cars would be unsafe and logistically unreasonable to attempt to correct.
In 1995 plans were made to rehabilitate the stop as an annex to the Transit Museum.  Over $1 million was granted by the federal government and the Metropolitan Transportation Authority to restore the space and, for awhile, was opened for tours.  However, in 1998 after terrorist bombings around the globe, Mayor Rudolph Guiliani shut down the space again in concern over the accessibility to the area under City Hall.
Today tours are again conducted, although sporadically.  While some of the skylights have suffered severe damage, some are surprisingly intact.  There is some water damage and the once elegant chandeliers are covered in decades of gray dust.  Yet the grandeur of Mayor McClellan's showpiece is still evident over a century after its opening. 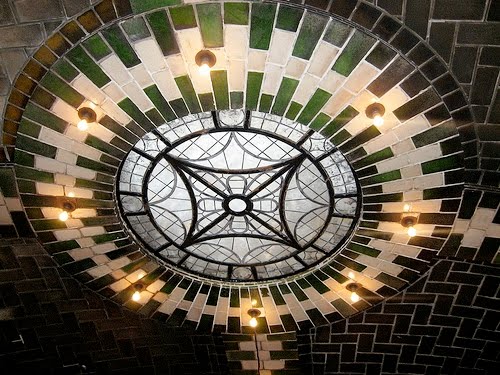