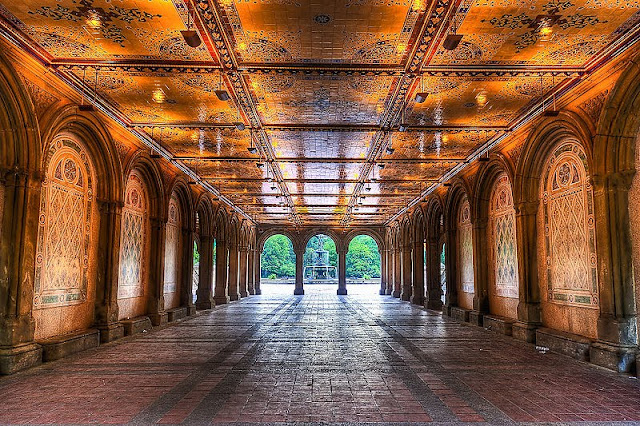 When Calvert Vaux and Frederick Law Olmsted laid out Central Park in 1858, they envisioned a grand focal point, an "open air hall of reception."  That centerpiece took shape as the three-part complex of the Upper and Lower Bethesda Terrace and the beautiful Bethesda Fountain.  Access to the fountain from below the Upper Terrace was made possible by the Arcade, a pedestrian passageway under the 72nd Street Drive.

What could have been a more-or-less mundane stone passage became, instead, one of the great architectural artworks in New York City.  Vaux's chief assistant, Jacob Wrey Mould who was responsible for many of the artistic elements in the Park, designed a tiled floor and ceiling of encaustic tiles -- created using a process by which colored clay rather than colored surface glazes form the designs. 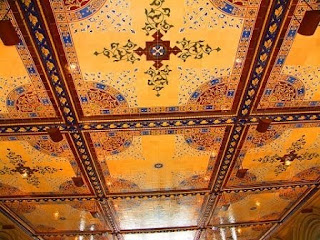 Mould separated the ceiling of the arcade, which is composed of a central walkway and two side loggiae, into 49 panels, each made up of 324 six-inch square tiles.  Islamic-inspired Victorian motifs in vibrant cobalt blue, mossy green, maroon, brown, white, ochre and cream create a vast, overhead carpet.  The shallow side niches below are painted to resemble granite and marble.

Minton and Company in Stokes-on-Trent, England was chosen as manufacturer.  Each of the 15,876 ceiling tiles was handmade and, when received in the States in 1869, was carefully hung in an elaborate gilded iron framework.

The Minton floor, unfortunately, lasted only until 1912 when it was replaced by quarry tile.

The Terrace had been waterproofed in the 1880s; however the process did not anticipate the wear-and-tear from above by anything heavier than clopping horse hooves and iron-rimmed carriage wheels, nor for modern paving and repaving.  By the 1960s water was seriously seeping through the stonework.  The 1970s, a dark time for Central Park landmarks, saw The Arcade used as a hang out for drug dealers and vandals.

In the early 1980s the 50-ton ceiling was showing obvious damage.  It was totally dismantled in 1984 and the Minton tiles were crated away for two decades.

"Restoration," explained James Reed, project director of Central Park Conservancy, "was beyond the Park's budget at the time."

When the City of New York was asked to donate $1 million to the project, the Office of Management and Budget refused.  Mayor Ed Koch quickly overturned their decision.  In characteristic Koch fashion he declared, "For us not to spend a million to restore the tiles, you'd have to be a Philistine."

Twenty years later the fund raising was finally complete. The Conservancy spent $7 million to restore the Arcade.  Seven conservation technicians hand-cleaned and repaired approximately 14,000 tiles.  Four months had been spent in simply numbering and cataloguing them. 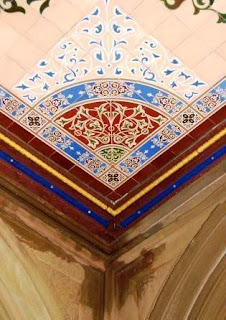 Approximately 900 tiles were missing and another 1,100 were too damaged to be reclaimed.  Those were reproduced by Maw and Company in England, the successor company to Minton, at a cost of $200 to $300 each and were installed in the east loggia.  One problem they had to surmount was thickness.  The Conservancy insisted that the new tiles match the one-inch thickness of the originals.  Modern tiles are commonly half that.

Restoration also included a complete rebuilding of the metal framework, comprehensive waterproofing, reconstruction of the decorative brick arches, and the installation of a cast iron and bullet-glass skylight, similar to the original. 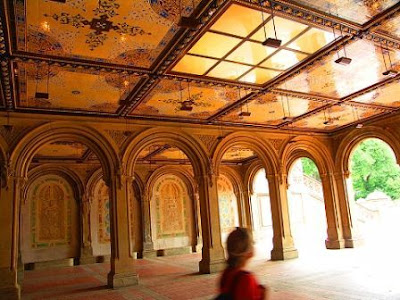 The restored Arcade with its remarkable ceiling -- the only one of its kind in the world -- was dedicated in March of 2007, marking the return of an artistic masterpiece to Central Park.
Posted by Tom Miller at 3:25 AM