In 1853, at the age of 18, Ferdinand Heinrich Gustav Hilgard came to the U.S. from his native Bavaria without his parent's approval or knowledge.  The boy was a progressive thinker, his father a conservative one.  Their political differences finally drove Ferdinand to board a ship for America, never to return. Upon his arrival he promptly changed his name to Henry Villard to conceal his identity and possible forced return.

Henry's early life in the States was not dull.  He became a journalist for several midwest newspapers, accompanied Lincoln during his campaign and rode the presidential train with him.  Villard covered the Civil War for the New York Tribune, and was Washington correspondent for the Chicago Tribune in 1865.  A confirmed pacifist, after the war he married Helen Frances Garrison, the daughter of the anti-slavery advocate William Lloyd Garrison.

By 1881 Villard was president of the Northern Pacific Railway, owned the New York Evening Post and The Nation and founded the Edison General Electric Company, which later became General Electric.  It was time for the Villards, who were living in an apartment on 17th Street, to have a home deserving of their social status.

Villard commissioned the fledgling firm of McKim, Mead and White to design a complex of six unified mansions on Madison Avenue at 51st Street.  The concept of separate houses designed to appear as a single structure was not new, but was rare in New York.  The firm, only three years old, used Rome's Palazzo della Cancelleria as its inspiration.  The result was a U-shaped Italian Renaissance palace; four homes opened onto the courtyard while two had entrances on 51st Street.

While the plans were still being drawn up, the Real Estate Record and Guide presumed, in 1881, that Villard's strategy behind his vision of courtyard-facing homes was to "secure privacy and get rid of tramps, and to live in a quiet and secluded way."  When completed the courtyard was accessed through a lacy cast iron fence the gateway of which was joined by an scrolled arch and lantern.

The interiors were all unique, using the finest materials and artisans.  Artists like Augustus St. Gaudens carved exquisite mantels, intricate wooden parquet floors involving tens of thousands of hand-cut pieces were installed and vaulted spaces were encrusted with elaborate mosaics. 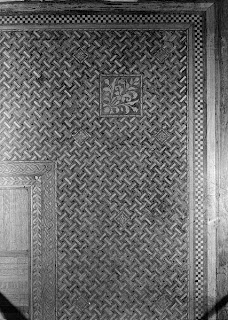 Intricate mosaic and wooden parquetry floors - photos NYPL Collection
All six homes were completed in 1884.  The Evening Post praised the restrained architecture, preferring it to what it termed the "vulgar" mansions a block away on Fifth Avenue.

Unfortunately, Villard lost his fortune around the time the homes were completed and Elisabeth Mills Reid, wife of New York Tribune editor Whitlaw Reid, purchased the Villard residence.  Although in a decade or two the 5th Avenue millionaires would abandon midtown, moving northward ahead of the encroaching stores and hotels, the wealthy owners in the Villard Houses remained.  As late as 1925 Mrs. Reid was still living at No. 451 with her 17 servants, including four footmen and two French cooks.


But while the owners did not flee the Villard Houses, they did eventually die, leaving their grand residences to be taken over by other interests.  After her death, Mrs. Reid's home was turned into Women's Military Services Club in 1943.  Mayor Fiorella LaGuardia was there for the dedication during which he wistfully said of the old home, "You won't see any more private mansions like this." 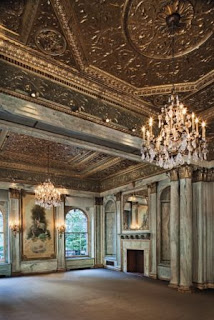 By the end of World War II in 1945, more than a quarter of a million military women had spent the night in Mrs. Reid's glorious mansion.  Their rooms cost them 50 cents a night.

While various concerns took over different houses, Random House and the Archdiocese of New York, for example; much of the interior detailing was astonishingly preserved.  In 1974 hotelier Harry Helmsley proposed a 51-story hotel on the site.  According to his plan the interiors of the homes, which had been landmarked in 1968, would be gutted and the eastern facades stripped off.

Preservationists bristled.  And Helmsley listened.  His hotel was redesigned in a more sympathetic glass and dark metal and original interiors would be preserved.  He commissioned architects Emery Roth & Sons and Hardy Holz­man Pfeiffer to design the modern structure and integrate the 1884 houses.  Started in 1977, the project was com­ple­ted in 1980.  The brownstone blocks removed from the rear of the houses were storehoused and is used even today for reparation of the historic facade, making for seamless restoration when needed. 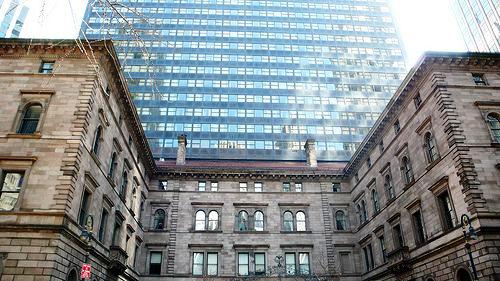 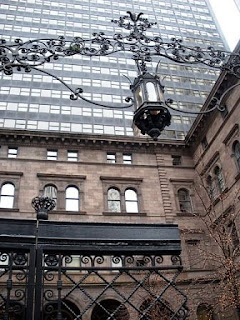 The Villard Houses as part of the Helmsley Palace mark an outstanding and creative reuse of vintage structures.
Posted by Tom Miller at 7:30 AM