The Church of the Holy Communion - 6th Avenue and 20th Street 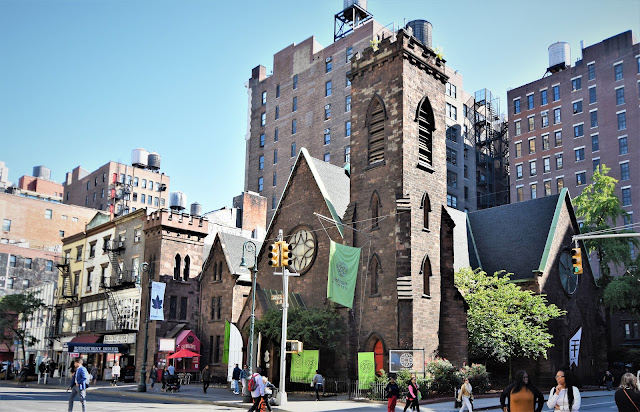 In the first half of the 19th century the Episcopal Church was still predominant among the Manhattan denominations and parishioners either rented or purchased their pews, a practice that bothered John Rogers.  He envisioned a church where the rich and poor could worship side by side.  After Rogers' death his sister, Mary A. C. Rogers, sought to fulfill his dream -- a "free church."

She turned to her brother-in-law, the Episcopal priest William Augustus Muhlenberg.  The progressive minded cleric took up the cause.   The plot on the northeast corner of Sixth Avenue and 20th Street was acquired and architect Richard Upjohn, who was simultaneously working on plans for the new Trinity Church downtown, was commissioned to design the structure.

Upjohn produced a quaint, Gothic-revival building in the style of an English country parish church.  Completed in 1846 and built of irregular brownstone blocks, its asymmetrical shape and crenelated bell tower along with the small front yard and side garden were picturesque.  Miller's Stranger's Guide to New York in 1866 called it a "singular-looking building of brown stone, in the form of a cross...The interior is novel and imposing, although divested of ornament."

The guidebook was impressed by its "free church" policy.  "Strangers can enter the church with perfect freedom, and seat themselves in any part of it."


While the neighborhood was essentially undeveloped at the time of the church's dedication, early members included such notable New York names as Vanderbilt, Astor and Gould.  From here, Muhlenberg continued his ground breaking ideas.  According to a December 12, 1885 article in The Churchman, the church was "...the first free church in this country, the first to have daily Morning and Evening Prayer, the first to have Holy Communion weekly, the first to have early Christmas and Easter celebrations, the first to decorate the chancel with flowers on festival days, the first to establish a boy choir, the first in the whole English speaking church to introduce a sisterhood, for its sisterhood antedates those of England."

What The Churchman failed to mention was that Muhlenberg also introduced medical care for the indigent, needlework programs for unemployed women, holiday dinners for the needy, trips to the country for poor boys, and the founding of a charity hospital, St. Luke's Hospital, in the Sister's House.  The sisters were dedicated to nursing and training orphaned girls for domestic service.  In an effort to help educate the poorer of his parishioners, Muhlenberg amassed a huge collection of books which later became the basis of the Mulhlenberg Library on 23rd Street.


In 1883 the church, now surrounded by the retail emporiums that made up The Ladies' Mile, hosted the first convention of black Episcopal clergymen.

By the middle of the 20th century the neighborhood around The Church of the Holy Communion had changed from opulent department stores to commercial and industrial businesses.  The former department stores now housed factories and warehouses.  The number of parishioners and the financial situation of the church dwindled.  To head off what he feared could be the destruction of the building, the rector pushed for and was granted landmark status in 1966.  Ten years later the church was abandoned and deconsecrated.

In a move that would probably have pleased Augustus Muhlenberg, the venerable church building was purchased by the Odyssey Insitute and used as a drug rehabilitation center.

However the Institute sold it in 1983 to Peter Gatien who opened the Limelight disco in the church, beginning a period of depravity including drug trafficking , reported sex rooms in the Sister's House, and a connection with the 1996 murder and dismemberment by Michael Alig of Angel Melendez, a regular drug dealer at the club.  The Limelight was closed down by police that year.

Another club, Avalon, opened in the former church for a short period before the building sat empty and neglected again until Jack Menashe renovated it as a mini-mall.  Menashe's transformation, costing $15 million, opened in early 2010 as the "Limelight Marketplace," a mini-mall.  The in the fall of 2014 the building was converted to a gym. 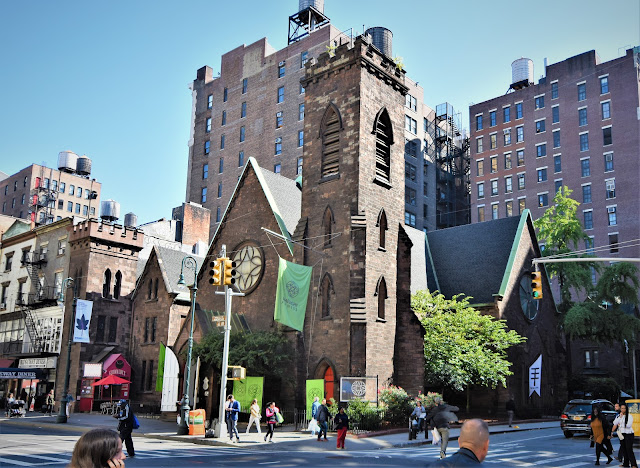 Despite its landmark statue, one of Manhattan's architectural masterworks endures continued humiliation.

photographs by the author
Posted by Tom Miller at 7:25 AM