Balto - The Dog, The Statue and the Disgrace 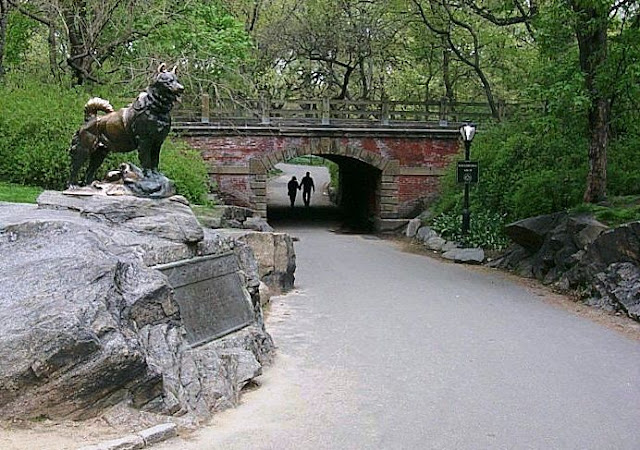 Visitors to Central Park are pleasantly surprised when they stumble across the bronze statue of a panting malamute, perched alertly on the stone outcropping on the main path near the Children's Zoo.  A favorite of children, the statue's dark patina of 105 years has been worn to a golden bronze along his back and head from the endless petting of little hands.

The unveiling of the statue in 1925 was the pinnacle of Balto's life ... things went downhill from there.

The story of how Balto earned his statue is as melodramatic as the silent films playing in theatres that winter of 1925.  In those days, Nome, Alaska was icebound and cut off from the rest of the world for seven months of the year; vicious winds prohibited air travel and the rail system terminated 674 miles away at the closest point.  Even today there is no road into or out of the town.

Nome, with a population of about 1400, had one physician, Dr. Curtis Welch, whose wife Lula served as his nurse.  When the last shipment of medical supplies arrived in 1924, Welch noticed that his requested diphtheria antitoxin was missing.  Having never seen a single case of diptheria in his eighteen years on the peninsula, he was not overly concerned.

And then tragedy struck.  An Eskimo boy died in December 1924 from what appeared to be tonsilitis.  Then two more children.  Then another became sick.  Welch finally recognized the symptoms.  There was a diphteria epidemic spreading in the town.

The doctor urgently telegramed the US Public Health Service in Washington for aid.  Within days every newspaper in the country was following the crisis in Nome.  The nearest antitoxin was in Anchorage, about 1000 miles away, with no apparent means of getting to it.

With no road, no railway and no airplanes, the only way to get the antitoxins to Nome was a relay of dog sleds.  Twenty men and 150 dogs were organized to run day and night without stopping.  As one sled finished its leg of the trip, another would pull up beside and the medicine transferred so not a moment was lost -- like relay runners passing a baton.

The conditions were beyond brutal.  Winds gusted to 70 mph and temperatures were -50 degrees Farenheit.  Blizzard conditions bulleted the men's faces with ice pellets, their fingers froze, and vision was reduced to mere inches.  The dogs could cover the dangerous landscape at only about six miles per hour.

In the lower 48 states, families clustered around their living room radios for news of the rescue attempt.  Three hundred citizens of Nome were now exposed to the disease.

Gunnar Kaasen had the next-to-last leg with Balto as the lead dog.  By now the blizzard was at its peak with white-out conditions.  It was Balto's sense of smell that kept them on the trecherous trail.  When they reached Point Safety where they were to hand off the medicine, the next man was asleep on his sled.  Rather than lose time, Kaasen did not slow down.  His decision doubled the distance his dogs had to run.

As Kaasen later told reporters "I couldn't see the trail. Many times I couldn't even see my dogs, so blinding was the gale. I gave Balto, my lead dog, his head and trusted him. He never once faltered. It was Balto who led the way. The credit is his."

On Monday February 2, Kaasen pulled into Nome with the antitoxin.  The epidemic came to an end.  Only five people succumbed to the disease and the entire country celebrated.  Kaasen and Balto were heroes. 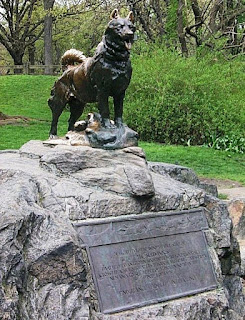 In New York City Frederick G. R. Roth, reknowned for his animal sculptures, was commissioned to sculpt the statue of Balto for Central Park.  Balto was present for the unveiling on December 16, 1925 as was Gunnar Kaasen.  The plaque below the statue reads:


Dedicated to the indomitable spirit of the sled dogs
that relayed antitoxin six hundred miles over rough ice,
across treacherous waters, through Arctic blizzards from
Nenama to the relief of sticken Nome in the Winter of 1925
Endurance * Fidelity * Intelligence


Then things took a slide for Balto.

He had been neutered early in his life so there was no chance for a cushy retirement as a stud dog.  Instead he and the six other dogs from his team were bought by the owner of a vaudeville troupe who toured them around the country.  When public interest diminished, they were handed off as a side-show exhibit in Los Angeles.

It seemed things would improve when George Kimble started a campaign to save the dogs.  A former prize fighter from Cleveland, he found the hero dogs underfed and unhealthy.  Through his efforts money was raised, much of it from school children, to purchase the dogs.  On March 19, 1927 they were given a parade through Cleveland -- right to the Cleveland Zoo, their new home.

The final indignity came when, upon Balto's death in 1933, he was stuffed and put in a glass case at the Cleveland Natural History Museum.  In 1998 Alaska fought Cleveland for the "return" of Balto; however Cleveland never ceded the body; other than for a five-month loan to the Anchorage Museum of History and Art.

The 1925 dog-sled run is commemorated every year with the Iditarod Trail Dog Sled Race every March which follows the course of the serum run.
Posted by Tom Miller at 5:42 AM