The Terrorists at 18 West 11th Street 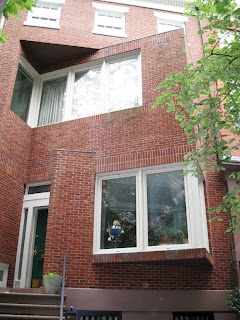 In the late 1960s and early 70s we did not fear terrorists from Iraq or Pakistan or Afghanistan.  Our terrorists came from Indiana and Connecticut and New York.  Variously called anarchists and revolutionist, they sought to attain their scattered goals -- from the end of the Vietnam War, to racial equality, to feminist rights -- by extreme violence and social disruptance.

Such a group of terrorists was the Weatherman who took their name from a line in Bob Dylan's song Subterranean Homesick Blues:  "You don't need a weatherman to know which way the wind blows."  An outgrowth of the radical SDS (Students for a Democratic Society), the Weatherman was organized in 1969.  By March of 1970 they had executed a series of bombings across the nation.  And when, that month, five members gathered at 11 West 18th Street in Greenwich Village, the home of member Cathy Wilkerson's parents, the stage was set for disaster.

Wilkerson's parents' home had been built in 1845 as one of four Federal style houses built by Henry Brevoort, Jr. for his children.  While Brevoort, one of New York's richest citizens, lived at 24 5th Avenue in a spectacular Georgian mansion, he chose decidedly less extravagant homes for his children.  Nonetheless, the brick houses were outfitted with up-to-the-minute comforts on a fashionably respectable street.

West 11th Street between Fifth and Sixth Avenue was a quiet, peaceful street.  Not only did the well-heeled professional class settle here, so did artistic celebrities seeking calm retreat.  Over the years, mail was delivered to names like Mark Twain, Leonard Bernstein and Thornton Wilder.

In the 1920s Charles Merrill, co-founder of Merrill-Lynch, owned 18 West 11th.  His son, poet James Merrill was born there on March 3, 1926, almost forty-four years to the day before the Weatherman group would visit.

For over three decades, beginning in 1930, Broadway lyricist and movie executive Howard Dietz would live in the house with a succession of three wives.  When Dietz would throw especially lavish parties, a moving van would be parked outside to hold all the furniture from the parlor floor.  Guests, after all, needed space to dance.

Finally, in 1963 Cathy Wilkerson's father, James P. Wilkerson purchased No. 18 West 11th.  Wilkerson was a successful radio executive who filled the paneled library with a collection of valuable bird sculptures.  The Wilkersons collected antique Hepplewhite furniture and art.  Their 1845 house still retained its Federal detailing including the original mantels.

When James and Audrey Wilkerson left for vacation in St. Kitts in March 1970, Cathy asked if she could use the house.  On March 6, she and four other Weatherman members entered the house to begin assembling a bomb.  Their intended target was a military dance at Fort Dix, New Jersey as a protest against the Vietnam War.  Unfortunately, no one of the group was educated in bomb-making.


Cathy Wilkerson was upstairs with Kathy Boudin when the nail-and-dynamite pipe bomb exploded below, instantly killing their three friends.  The front of the house was blown out and the explosion shook the entire block.  Neighbors, including Dustin Hoffman at No. 16, rushed into the street.  Cathy Wilkerson, naked, and Kathy Boudin, wearing only a pair of jeans, emerged shaken and soot covered from the blazing ruins.  A neighbor, Susan Wagner, took them to her house where they showered and borrowed clothes.  They then said they were going to a pharmacy.  They were never seen again for over a decade.
Amazingly, investigators later found 60 sticks of unexploded dynamite, blasting caps, lead pipes packed with dynamite and even more bundles of dynamite taped together.  Miraculously the explosion and subsequent fire did not ignite this arsenal.  Had it exploded, the entire block would have been taken out.

The lot where the house had stood sat empty behind a fence for eight years.  The property was purchased by respected architect Hugh Hardy, with Steuben Glass executive Francis Mason.  Hardy designed a modern, brash residence to fill the void.  The neighbors and the Landmarks Preservation Commission were less warm to the idea.

In 1978 Hardy sold the lot to David and Norma Langworthy who used Hardy's exterior design -- with changes that were acceptable to the Commission.  The resulting rowhouse melds well into the flow of the block, even mimicking the original stoop, doorway and top-most floor; but fervently showing off its individuality with the abrupt, jutting angled parlor and second floors, and wide picture windows.  Hardy's solution ties the house back to its origins but holds on to its important recent history.

Cathy Wilkerson was arrested in 1980 and convicted of illegal possession of dynamite.  Kathy Boudin was captured a year later after a gunfight with police following a failed Brink's Armored Car robbery.  She pled guilty to felony murder and robbery. Pass by the wide parlor windows of 18 West 11th Street today and you will see a Paddington Bear staring back at you.  He has stood in the window since the Langworthy's moved in over 30 years ago.  The bear is always there, although his outfits change according to the season or weather.  Only once has he had company.  That day he appeared in a tuxedo with a female bear next to him in a wedding dress.  A physician living on the block pointed the pair out to his girlfriend as they passed.  Then he dropped to one knee and proposed.

non-credited photographs taken by the author
Posted by Tom Miller at 11:59 AM