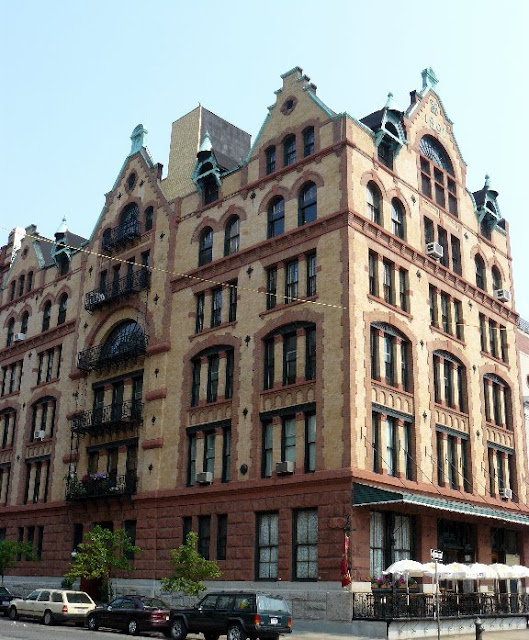 Were it not for his eye-catching warehouse on the corner of Watts and Washington Streets, Fleming Smith's name would have disappeared with time.  Little of his life is documented and what remains revolves around his warehouse.

The neighborhood around Watts and Washington had been, in the first half of the 19th Century,a refined residential enclave anchored by St. John's Church and the fashionable St. John's Park.  Two years after the end of the Civil War, however, Cornelius Vanderbilt purchased the park from Trinity Church and built a railroad station on the site.  And there went the neighborhood.

Fine Federal residences were razed for warehouses and factories and the area soon became entirely commercial.  It was here that Fleming Smith chose to erect a warehouse of his own in 1891.  Smith did not want any run of the mill warehouse and contracted the respected architect Stephen Decatur Hatch to design it.

Hatch, who would go on to design important structures like the Princeton Club and New York Life Building, produced anything but "run of the mill."   Instead his neo-Flemish building looks much more like a decorative 1890s school building than a commercial warehouse.  Using granite, sandstone and brick with copper ornamentation, Hatch created a near-whimsical facade.  His grouped windows and large Romanesque arches allowed light to pour into the building.

In the last decade of the century, Flemish Revival was sweeping the city as builders gave a nod to Manhattan's Dutch roots.  Substantial buildings designing in the style, like the West End Collegiate Church, as well lesser town houses and stables dotted the city.

Five stories of yellow brick rise above the rusticated stone first floor, culminating in fanciful copper-lined stepped gables.  Between the great gables, ornamental copper dormers topped by weather vanes project from the facade.  On the west side enormous copper numerals in the gable proclaim the date, 1891, while Fleming Smith's monogram entwines above them.

At the turn of the century Smith's building housed a shoe manufacturer and a wine storehouse.  Throughout the 20th Century it continued its intended purpose, surviving with no alterations being made to the exterior facade and none of the copper ornamentation being stripped off or lost.

In the late 1970s a complete facade restoration was performed by Scott Henson Architects, LLC. and subsequently 135 Watt Street became the first commercial Tribeca building to be converted to residential use.  Today a restaurant is housed in the space where horse-drawn drays once backed in to receive crates of wine.  A two-bedroom apartment on the floors above will cost you between $2.5 and $3.5 million.
Posted by Tom Miller at 8:23 AM