Back from the Ashes -- Central Synagogue 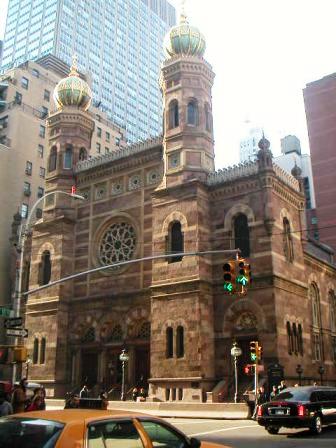 When the little Congregation Ahawath Chesed decided to move from their Ludlow Street synagogue where they had been since 1846, they set out to impress.

And impress they did.

Numbering only 150 families, the German Reform congregation chose Henry Fernbach to design their new building.  Fernbach was a Jewish German immigrant who had come to the U.S. in 1855 and would go on to make his mark in two widely divergent architectural venues:  cast iron commercial buildings and Moorish Revival synagogues.

The fashionable 19th Century architectural styles had posed a problem for synagogue designers for decades.  Gothic Revival was heavily used for Christian churches, while Greek Revival smacked of a tradition of pagan worship.  Moorish Revival, however, harkened back to the pre-Inquisition days when Jews enjoyed relative freedom in Spain.

Fernbach, reportedly the first Jewish architect in the U.S., used contrasting horizontal bands of stone, Moorish stone arches and exuberant roofline crenellation for dramatic effect.  When it was completed in 1872 with only a few buildings around it, the synagogue was -- as intended -- impressive.

More so, however, was the spacious interior which could accomodate 1000.  Fernbach's High Victorian interpretation of the Moorish theme blanketed the surfaces with colorful and intricate stenciling.  Deep, vivid colors like crimson and cobalt, burst from the walls.  Gold stars against the deep blue ceiling represented the heavens above the worshippers. 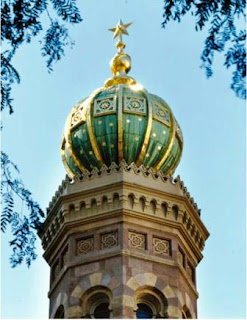 Fire damaged the synagogue in 1886; however the interior was restored using the original 1872 plans; reclaiming the inticate stenciling and colors.

In 1898 Shaar Hashomayim merged with Ahawath Chesed and in 1915 the name was changed to Central Synagogue.

As the middle of the 20th Century neared, the congregation decided to refurbish the aging building.  In 1949 they engaged Ely Jacques Kahn, who designed several skycrapers and simliar commercial structures.  Not a fan of historic preservation, Kahn's plan instead was a make-over.

His updating called for, among other things, the painting over of the Victorian stencilwork and replacing the Moorish chandeliers with Art Deco fixtures.  Much of Ferbach's lavish ornamentation was stripped away.  The exterior was, happily, relatively untouched save for the removal of the roofline crenellation.  Years later architect Hugh Hardy would explain Kahn's renovation to The New Yorker as "He was embarrassed by all this decoration—you can see how he simplified it."


Kahn's mid-century designs would still be in place were it not for the devastating fire that tore through Central Synagogue in 1998.  Started by a welder's torch, the fire destroyed the roof, which collapsed into the interior.  Because of water damage, 85 percent of the decorated surfaces were destroyed.
To many it appeared that Central Synagogue was lost.
But for the intrepid congregation "lost" was not an option.  Hugh Hardy, who had restored several other New York City landmarks like Radio City Music Hall and The Rainbow Room, took up the challenge.  The stained glass windows were in shards.  Shattered pieces of encaustic tiles littered the ashes.  Sunlight streamed through the void where the ceiling had been.

Molds were made of the chunks of decorative plasterwork before they were discarded.  Drawings were done to document the sequence and placement of the ornamentation.  Enough original glass from the windows was salvaged to restore one full window -- which was dedicated to the firemen who saved the building.  The remaining windows were reproduced using the original designs, photographs and matching glass. 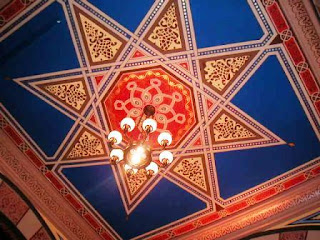 Referring to as much pre-Kahn documentation as could be found, Hardy's plan to bring Central Synagogue back to its Victorian splendor took shape.  When completed, the mid-20th Century constraints were gone.  "What we have done is much more exuberant than what people here are used to, but it is original to the building," Hardy told The New Yorker. "Now the building is as raucous as ever." 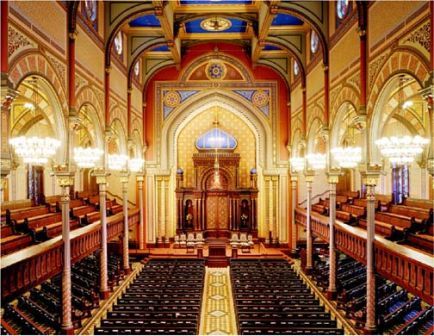 Craftsmen, using 19th Century methods, painstakingly revived the interior.  More than 5000 stencils were applied to the walls and ceiling by hand, using 69 colors.  The pews were reproduced in walnut and ash to match the originals and they sit on flooring consisting of 4,000 square feet of multi-colored encaustic and quarry tiles.  Of the 40,000 tiles only 10,000 of the originals could be salvaged.  The remaining tiles were hand-made in England.  While the exquisite ark miraculously survived the fire, it required careful cleaning, reguilding, refinishing, and partial repainting.
Today the stars twinkle on a cobalt sky over the heads of the worshippers at Central Synagogue once again.


interior photographs by Central Synagogue
Posted by Tom Miller at 4:52 AM