The Burying Ground Beneath the Ball Field -- James Walker Park


In his 1896 Walks In Our Churchyards, John Flavel Mines wrote "The monuments are seldom elaborate, but sometimes the tombs bear the masonic device, or the old-time figures of a weeping woman, an urn and a willow."  The brown slabs often told of the instances of the death, or of the occupation of the deceased:  "George Shepley, who fell a victim to intermittent fever, 1803,"  "Frederick Gordon, calico engraver, 1812," "John Black, Bookseller, 1830, beloved by all who knew him," or "Mrs. Elizabeth Lawrence, wife of Mr. John Lawrence, merchant of New York, a pattern of exalted goodness."

The most ambitious monument was that erected by Engine Company 13 in 1834 honoring Eugene Underhill and Frederick A Ward.  Placed in the near-center of the cemetery it was a large granite-based sculpted sarcophagus topped with a fireman's cap, torch and trumpet -- the tools of the volunteer firemen of the period.  Inscribed on one side is:

THIS MONUMENT IS ERECTED
BY THE MEMBERS OF
EAGLE FIRE ENGINE COMPANY
NO. 13
IN CONNECTION WITH THE FRIENDS OF THE
DECEASED
TO COMMEMORATE THE SAD EVENT
CONNECTED WITH THEIR DEATH
AND THE LOSS
WHICH THEY DEPLORE


The opposite side reads:

Edgar Allan Poe reportedly would roam the burying grounds at night when he lived on nearby Carmine Street.

It was here, in 1836, that Helen Jewett was buried.  The murder of Helen Jewett was the scandal of the day and 19th Century New York's trial of the century.  A prostitute (we would call her a high-class call girl today), she was bludgeoned and axed, then set on fire.  Her murderer, Richard Robinson, was never convicted.

A few nights after her burial, medical students from the College of Physicians and Surgeons on Chapel Street, dug up her corpse.  According to The New York Herald they dissected her body then boiled the flesh from her bones, hanging "her elegant and classic skeleton" in a closet at the school.

By the end of the century well over 10,000 people were interred in St. John's Burying Ground; although fewer than a thousand were marked with tombstones or monuments.

Around the time of the Civil War Leroy Street became lined with elegant, wide Italianate homes.  Whether or not it was these wealthy residents, seeking a view more pleasant than a cemetery, who began the movement to replace it with a park is uncertain.  However by 1895 the push was on.

Although an adjoining, larger block was offered at "a reasonable figure" as the site for a park, it was turned down.    John Flavel Mines protested "...but the political children of Naboth are determined to have that particular spot, by force of law if necessary, even though its occupation by them shall tear the dead from their graves and compel the destruction of the trees that have twined their roots around the coffins and boxes of the buried thousands who sleep there."

Those whom Mines called "the political children of Naboth" won the fight.

Using Eminent Domain the City acquired the burial grounds in 1896.  While it was widely publicized that the graves were relocated uptown to 155th Street and Broadway, in fact only one or two hundred were moved.  The tombstones of the rest were uprooted and plowed under.  Around 10,000 bodies remained in place as the City planned its new park.

Carrere and Hastings, who would later design the great marble New York Public Library, were given the commission.  The result was spectacular.  An Italian pleasure park, it included manicured gardens, a cascading lagoon, gazebo and sunken garden.  A heavy cast iron fence with white stone piers encircled it.  Above the graves of the old burial ground, a stylish Victorian park, now named St. James Park, took shape.

The sole reminder of the St. James Burying Ground was the firemen's monument.  It was moved to an unobtrusive site on the Leroy Street side and a brass plaque was inserted on the side (whether or not the two firemen's bodies were moved as well is unclear).  As reported by The New York Times, "In this amusement resort, which presents a scene of revelry and gaiety every afternoon, stands the only survivor of the days when the park was used as the cemetery for the doomed St. John's Chapel...The changed conditions of the place are well expressed by this inscription on a brass tablet placed there in 1898:  The City of New York devotes to the service and comfort of the living this ground formerly used by Trinity Parish as a burial place for the dead, whose names, although not inscribed, are hereby reverently commemorated."


Whether the dead were "reverently" treated by the City is a matter of debate.

Seven years after Carrere and Hastings' masterful park was completed it was gone.  In 1903 a new playground replaced it.  As years went by, fewer and fewer New Yorkers remembered that there had ever been a cemetery there at all.

Then in September of 1939 workmen doing renovations on the playground struck an underground vault.  A diminuative cast iron coffin surfaced.  The Egyptian Revival casket was designed to mimic a shrouded mummy.  On its face a silver plate identified the body as Mary Elizabeth Tisdall, 6 years and 8 months old.  She died on April 14, 1850.  According to The New York World-Telegram "The girl's cast iron casket...had a glass window in the top.  Her white silk dress still looked fresh and dainty.  After 89 years you could still see that she's been a pretty yellow haired child."

The playground has undergone many renovations.  It was renamed James Walker Park in honor of the mayor who resided at 110 Leroy Street, and in 1996 received $250,000 of updating including new play equipment, a spray shower and a ball field.  Except for one surviving section on the Leroy Street side, the elegant cast iron fence has been replaced by chain link fencing.

Today the park is visually unappealing but functional.  And under the feet of scores of children playing ball and frolicking in a water spray, approximately 10,000 bodies lie forgotten. 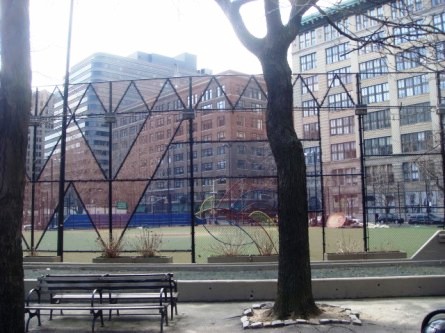