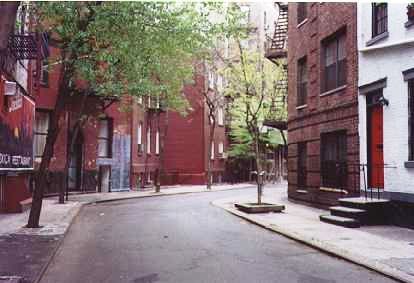 Unknown to most, in the 17th century the Dutch living in New Amsterdam at the tip of Manhattan island collected an annual fee from "partially freed" black slaves, who were allowed to own property far north of the walled village.  The land that these early Afro-Americans farmed was around a brook the Algonquins called Mannette -- variously translated as "Spirit Water" or "Demon Water."

The Dutch interpretation was Mintje Kill, or "little stream," which eventually became "Minetta."  The trout-filled brook flowed, roughly, from where Sixth Avenue and 21st Street is today to the Hudson River.  The Black farmers used the stream bank as a pathway, which became known in the 18th century as "the Negroe's causeway."   After the brook was covered over in the 1820's, the well-trodden path became Minetta Lane from MacDougal Street, turning into Minetta Street and curving towards Bleecker -- following the old stream's course.

Here the first enclave of Blacks in New York established themselves.  In 1827 slavery was abolished in New York and most of the city's large black population was centered in this area.  By the 1840's little curvy Minetta Street was lined with the humble houses of the poor while only three blocks away on Bleecker Street was the fashionable Depau Row. In these expensive, marble-halled homes wealthy citizens like the retail magnate A. T. Stewart lived.

Many of the original residents of Minetta Street moved northward in the 1860's.  Emancipated slaves who fled the South, however, increased the numbers in what became known as "Little Africa."   In the center of what is now 6th Avenue sat St. Benedict the Moor, the first Black Roman Catholic church in the city.

As the century progressed, Minetta Street grew seedier and more dangerous.  In 1890 reformer Jacob Riis ranked Little Africa as the social “bottom” of the West Side of Manhattan.  He described the homes where the impoverished blacks lived as "vile rookeries."  Around the same time author Stephen Crane visited Little Africa, probably doing research for his 1898 novella, The Monster.

He spoke of residents by their nicknames: No-Toe Charley, Bloodthirsty (a large and "hideous" murderer), Black-Cat (a bandit), and Apple Mag.  Dingy taverns called "black and tan" saloons because they served both races dotted the area.  Minetta Street was notorious for its stabbings, murders and muggings until the new police commissioner, Theodore Roosevelt, took matters into his own hands.  Roosevelt replaced the captain of the local precinct and a crack-down was initiated.  In 1896 Crane revisited the area and remarked, "There is probably no street in New York where the police keep closer watch than they do in Minetta Lane.”

Mixed in with the criminal element were the upstanding, industrious Black citizens who simply had nowhere else to go.  As the century closed, there were 1,200 Blacks in the Minetta area and the number of Black churches had grown.  Census records show that in 1900, families like that of Morgan J. Austin, a Black waiter, with his Irish wife Annie and their eight children were living in this dangerous environment.  Their fifteen year old son was working in a laundry to help out.

By 1910, the Annie's mother was living with them, two more children were working, and they had taken in a lodger.  Minetta Street was no longer exclusively Black.  Poor Italians and Irish immigrants searching for cheap housing mixed in.  The churches of Our Lady of Pompeii and Saint Anthony of Padua were built as the area around Little Africa became increasingly Italian.

A few years later Vincent Pepe bought up almost all of the houses and tenements on both sides of Minetta Street.  On the west side he combined 15 buildings and created a common garden to the rear with an outside entrance.  Calling his development "The Minettas," he wrote ''The artist, the writer, the creator of beauty in any medium -- these are the men for whom the Minettas should be preserved.''


In the 1920's artists began looking towards Greenwich Village as a new Bohemia -- like the West Bank of Paris.  Curving Minetta Street with its lowly buildings was undeniably picturesque.  The New York Times remarked in 1923 that Minetta Street was "As free from noise and as peaceful as though miles away."
Artists began moving into the little houses where only recently several indigent families were crammed in.  In 1924 Pepe duplicated his earlier effort on the east side of the street with another garden-backed group of buildings.  The Minetta Tavern opened a block away in 1937, attracting regulars like Ernest Hemingway, Ezra Pound, Eugene O'Neill, E. E. Cummings, and Dylan Thomas.  The neighborhood was changing. 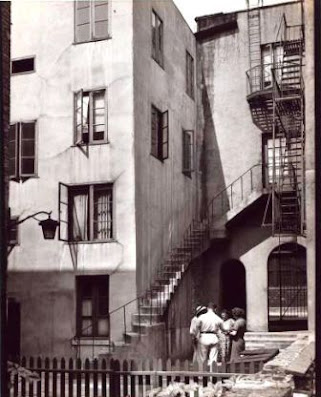 from the collection of the New York Public Library
No one would remember Little Africa by the 1960's.  No one would recall that Minetta Brook still runs under the pavement somewhere.  In 1960 The Fat Black Pussycat opened in what had earlier been The Commons, a Minetta Street café.  Here entertainment hopefuls took the stage hoping to be noticed.  Mama Cass Elliot started here.  So did Tiny Tim, Richie Havens and Shel Silverstein. 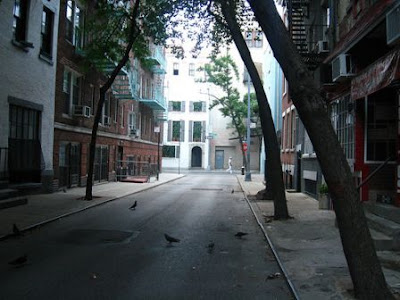 Today there is no trace of Little Africa on Minetta Street.  Even The Fat Black Pussycat has been replaced with a Mexican restaurant, although the painted brick sign still remains.  The courtyards installed by Vincent Pepe are still there, although a little care-worn.  And houses on Minetta Street, once the haunt of characters like No-Toe Charley, are selling for between $3 and $5 million. 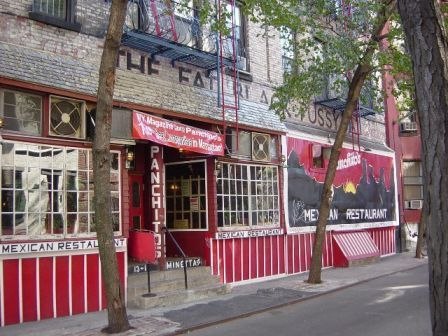