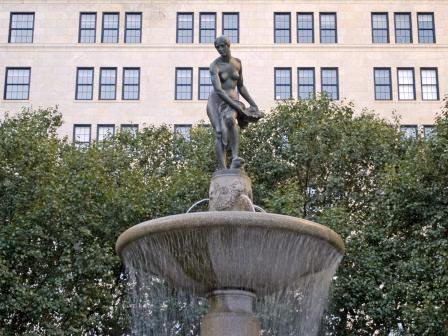 When Audrey Marie Munson was growing up in tiny Mexico, New York she had no inkling that one day a bronze depiction of her naked derriere would offend the widow of the great Cornelius Vanderbilt.

The seed was planted for Mrs. Vanderbilt's irritation when sculptor Karl Bitter envisioned a grand plaza similar to the Place de Concorde in Paris.  The Grand Army Plaza at the southeast entrance to Central Park, he felt, was just the spot.  In those days of the City Beautiful Movement, the open area between Vanderbilt's immense 5th Avenue mansion and the Sherman Monument, with the new Plaza Hotel creating the western border, cried out for civic beautification.

Bitter lobbied for his plaza for several years.  Then when publisher Joseph Pulitzer, the owner of The New York World, died in 1911 his will set aside $50,000 for the creation of a fountain specifically for that site.  A closed competition was held for the design of the fountain which was, perhaps not surprisingly, won by Karl Bitter along with architect Thomas Hastings.  Bitter would design the figure while Hastings, of Carrere & Hastings, was responsible for the fountain itself.

But Bitter held out.  $50,000, he complained, was enough for a fountain but not enough for the plaza to showcase it.  The sculptor won out and additional funds were amassed to create his long envisioned plaza.  In order to ensure symmetry, the Sherman Monument would have to be moved 16 feet to the west, where it sits today.


For his figure atop the fountain, Bitter looked to Pomona, the Roman goddess of abundance.  And for his model he chose Audrey Munson.  Audrey was a beautiful young woman who, in the early days of the 20th Century, was not embarrassed to take off her clothes.  She posed for at least 15 statues in New York City alone, including "Civic Fame" atop the Municipal Building and the figure of Columbia on top of the Maine Memorial.

For Pomona, Munson would be naked again except for a cloth over one leg as she bends over holding a basket of fruit. 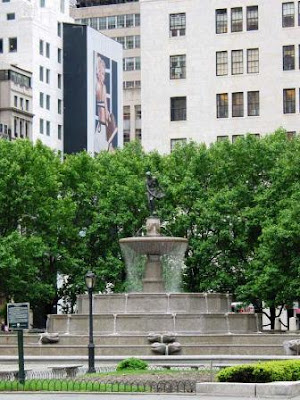 In the meantime, Hastings designed a grand limestone fountain of six tiered basins which spill one into the other.  Additional sculptures of large rams heads and cornucopias around the rim were done by Orazio Piccirilli of the reknowned Bronx-born family of carvers.

Bitter finished his clay model for the Pomona in 1915.  Only days later he was struck and killed by an automobile.  The task of finishing the statue based on Bitter's model passed to his assistant, Karl Gruppe, along with Isidore Konti.

In 1916 everything finally came together:  the grand plaza was completed, the Sherman Monument had been moved, Hastings' magnificent tiered fountain was installed and Karl Bitter's Pomona had been cast and set in place.  Everyone it seemed, was happy.

Everyone except for Mrs. Alice Vanderbilt.


Mrs. Vanderbilt's mansion engulfed up the entire block front where Bergdorf-Goodman now stands.  The view from her bedroom looked north towards the Park.  The problem was that now it also had an unobstructed view of Audrey Munson's naked posterior.  As the story goes, in heated defiance Alice Vanderbilt ordered that her bedroom be moved a full city block to the south to protect her gaze from the offending statue. 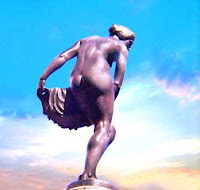 The fountain has been restored several times, first in 1948.  Then, in a much larger undertaking, the entire 12-foot central basin was replaced with a granite copy in 1970.  Beginning in 1983, a $3.7 million rehabilitation on the fountain and the plaza in general was started.  The fountain was disassembled and the statue of Pomona was placed in storage.  Six years later, with new plumbing and wiring and restored stonework, the fountain was up and running again.  But not for long.

In 1996 the replacement granite basin developed a serious crack.  Once again the fountain was shut down and a new granite copy was installed.  Today, however, the fountain spills its water down Hastings's six tiers as intended in 1916 -- although Bitter's grand plaza has been sorely reduced in grandeur.

And what about Audrey Munson?  She went on to pose for scores of statues and monuments nationwide by the greatest artists of the day and starred in four silent movies -- naked.  She was the first fully-nude actress on film.  Her career ended when, in 1919, her mother's landlord, Dr. Walter Wilkins, murdered his wife so he would be free to marry Munson.  Although Munson was not accused of wrongdoing the scandal ruined her career.