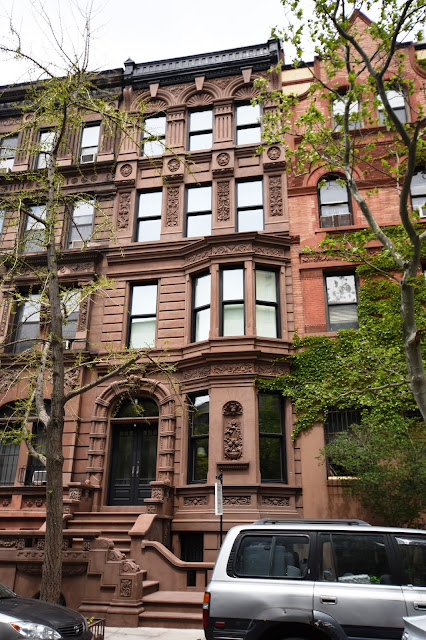 When developers Ryan & Rawnsley hired architects Thom & Wilson to design a row of five houses on West 88th Street in 1888, they had big plans.  The Upper West Side was quickly taking shape as developers grabbed up vacant building plots to create was was essentially a new suburb.

Ryan & Rawnsley intended for their speculative project to catch the attention of financially-comfortable families.  The completed homes would, indeed, be attention-grabbing.

Completed in the spring of 1889, the row was an over-the-top medley of Renaissance Revival ornamentation.  The facades were a visual overload of textures and shapes--arches, rusticated and fluted pilasters, intricate carvings, angled bays and dog-legged stoops.  Nos. 25, 29 and were identical; while Nos. 27 and 31 were near twins.

The Real Estate Record & Builders' Guide was impressed.  On June 22, 1889 it declared "The passer-by on the north side of 88th street, a few hundred feet west of the Central Park, cannot fail to notice a group of five stately-looking private residences."  The Guide noted the "considerable carved work in floral and figure designs," then described the interiors.


Noting that the rooms were trimmed in hardwood, the article said that on the parlor floors were "reception, drawing and dining rooms, flanked by a butler's pantry, with a private stairway leading to the culinary department.  The entrance to each house is barred by three massive mahogany doors--storm, vestibule and hall--with windows of beveled glass."  Built-in furniture on this level included "handsome mirrors and hat stands" in the foyers, and a "handsome bouffe" in the dining rooms.


While the parlor floor was trimmed in mahogany, the second and third floors were in oak.  The two bedrooms on the second floor were "laid out en salon."  The Guide said "The saloons are larger than usual, and one finds oneself surrounded on all sides by mirrors, with a profusion of closets and an attractive toilet-stand."  A bathroom to the rear of this floor "has a cosy and rich appearance, and has a porcelain tub and a French bowl."  The third floor was similar to the second, and every room included a fireplace.

The stair hall was illuminated by a stained glass skylight.  Ryan & Rawnsley provided the latest in appliances in the basement service level.  "The 'Defiance' range, porcelain washtubs and other necessities complete the domestic arrangements on this floor."

"Mrs. Hanna" may have been Hanna Morganstein.  The family of Max Morganstein lived in the house as late as 1896, when he served on the jury of the corruption trial of Police Captain Thomas Killilea in May.  Killilea was charged with having accepted a $100 "gratuity" from the manager of the Manhattan Field for "his services in preserving order during the Yale-Princeton foot ball game on Thanksgiving Day, 1894."

At the time Max Morganstein was President of the West-Chester Hardwood Company at No. 68 Broad Street.  His brother, Ernest, was a partner in the firm.

In February 1903 Charles Brenneman and his wife, Elizabeth, purchased No. 25.  The couple had two children, 29-year old son, Charles Stanley Brenneman,  who had graduated from City University in 1894; and Mary N. Benneman.


Charles S. Brenneman was the Treasurer of the United Real Estate Owners' Organizations.  He and Elizabeth would be the first of a string of residents to bring unwanted publicity to No. 25 West 88th Street.

When Elizabeth's grandfather, Frederick Leonhard died, Charles was the executor of his estate.  A long-running court case ensued in 1900 when other relatives accused the Brennemans of investing $12,388.71 of the estate's money in real estate.  Not only, the relatives accused, did they not see any proceeds from the investments; but the Brennemans "received certain rents, issues, and profits" which they neglected to account for.

It would not be long before Charles S. Brenneman was back in court regarding an unrelated suit.  He purchased a large amount of stock in the Jefferson Gold & Silver Mining Company in Round Mountain, Nevada.  With Warren J. Flick he organized Brenneman & Flick to run the operation.  On October 23, 1908 the men visited the offices of the Joshua Hendy Iron Works in San Francisco and ordered $10,502.00 worth of mining machinery.

On July 14, 1909 Joshua Hendy Iron Works sent a telegram to No. 25 East 88th Street which read "When will we obtain settlement [of] our account.  Wire answer."

Two days later Charles Jr. replied "Wire received.  Father away west.  Have advised him."  And the following day the California firm received a brief telegram "Your message received.  Will send you letter.  Brenneman."

In the promised letter Brenneman blamed the delay in payment on Flick.  "Mrs. Flick left some time ago to go to a sanitarium with Mr. Flick."  That caused delays in opening the mine.  Brenneman closed his letter with "Trusting that we may be granted an extension of your patience."

The extension of patience lasted only so long.  The Joshua Hendy Iron Works continued to sent statements to No. 25 West 88th Street; but, according to court papers "Brenneman, however, says he did not receive any statement."  The case finally landed in New York Circuit Court on February 13, 1911.

Somewhat ironically, in the meantime Mary N. Brenneman had become a lawyer.  She kept up appearances for the family and by 1912 she was President of the Portia Club, founded in 1901 by graduates of the women's law class of New York University.  On Thursday, December 5, 1912 the club hosted a Speakers' Day at the Hotel Astor.  The Women Lawyers' Journal noted "The President, Miss Mary N. Brenneman, ably presided and introduced the speakers...Discussion on civic improvements followed."

Public Service Commissioner John E. Eustis most likely wished he had not accepted the invitation to speak a year earlier.  The New York Times reported on December 22, 1911 that he had "experienced a sample of feminine curiosity that for a moment took him off his feet."

One woman lawyer wanted to know why the subway was not extended to Pennsylvania Station.  As he tried to explain his case, another asked why "universal [mass transit] transfers were not put into effect at once."  Before he could completely respond, he was interrupted by another woman who wanted to know why "people couldn't get to Coney Island for 5 cents when they could go to the Bronx Zoo for a nickel."  Eustis made an excuse to duck out.  "The Commissioner got out of the maelstrom of question marks by hurriedly pleading another engagement."

By the Depression years many of the private homes off Central Park were being converted to apartments.  The Brenneman family retained ownership of No. 25; but in 1934 leased it to Lawrence B. Conklin who converted the house to a triplex in the basement through second floors, and a duplex above.

When E. Brenneman leased the house on April 2, 1938 to Fred Steffenbaer, however, a more significant change followed.  Building Department records indicate that it was converted to "furnished rooms and apartments."

Among the residents here in 1941 was 47-year old Richard Montgomery Jordan.  When he applied to the South Shore Trust Company on Long Island for a $400 personal loan, he said he was a public relations officer employed by the Treasury Department.

When it was revealed that he had posed as an employee of the Government, he was arrested and sentenced to 18 months in jail on February 11, 1943.

Bad press visited No. 25 West 88th Street again on September 10, 1975 when resident Thomas Fasy and three other men got into an argument a block away, on 88th Street between Amsterdam and Columbus Avenues.  The 33-year old Fasy suffered a gunshot in the altercation.


The configuration of the apartments changed several times.  In 2002 it was returned to a single family home; divided to two residences in 2008; and reconverted to a private residence in 2015.  As could be expected, nothing remains of Thom & Wilson's Renaissance Revival interiors which so impressed The Real Estate Record & Guide in 1889.

But the sumptuous exterior of the house (which was recently offered for $19 million) is mostly untouched.